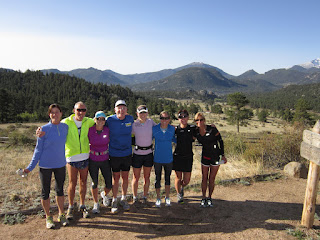 This has been a year of firsts for me.  Completing my first 100 mile race.  Running the entire coast of Oregon in one week.  And now, helping to conduct my first running camp with Terry Chilpin at Active at Altitude.  All have been learning experiences and this last one was no different. 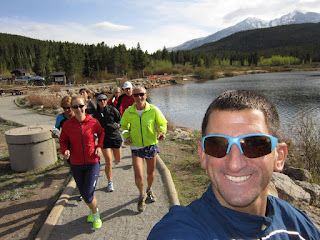 As I stated in an earlier blog, I have been planning this camp with Terry Chiplin for many months now. What makes Terry and I perfect complements to each other are out differing philosophies. Terry is a vegetarian; I am the first spokesrunner for the National Cattlemen’s Beef Association. Terry is very in touch with the metaphysical side of running; I am more of a “just go and run” thinker. This camp allowed the two of us to work with the seven wonderful campers involved here in unique and different ways harnessing methods from our varying viewpoints. 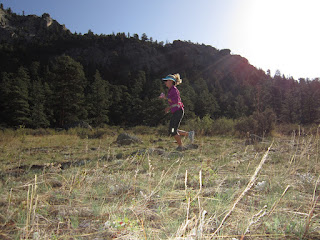 Which brings us to the campers themselves.  Terry’s gorgeous home in Estes Park has, theoretically, room for twelve campers. While I can imagine having two more than that we had, I was not quite ready for an entire full house. Hailing from Oregon, Texas, Mississippi, New Jersey, New York, Colorado and Virginia the campers brought different skill sets and different philosophies of their own. Some were recovering from torn tendons, some were former Olympic Trials qualifiers, some had recently undergone surgery and all had their own demons and battles to fight. 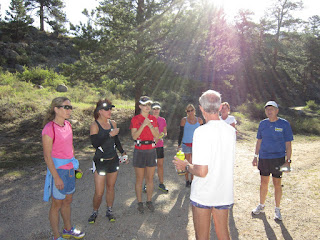 To recap each day would be a little on the monotonous side.  It would also lose a lot of the essence of what the camp is about. We, of course, ran.  However, the camp was about more than just running. We knew that not every aspect of the camp was for every runner. It is pretty impossible to craft a camp of such a diverse group of runners and plan everything to the enjoyment of all 24/7. But with many of the runs cresting over 8,500 feet, over some technical terrain, all of the campers were pushing their boundaries. 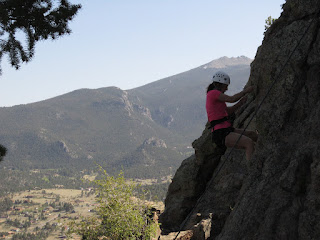 Personally, while the runs were absolutely gorgeous and we were blessed with next to perfect weather all week long, most of my favorite moments were when we were not running. For example, having scheduled an afternoon away from running, we instead found ourselves scaling “The Thumb”- a mountain for novice rock climbers near Estes Park.

Virtually every camper was stepping into the harness for the first time while simply getting to the rock’s cliff-face was a challenge for some.  One camper had to overcome fear of balance issues brought on by a recent car accident. Others simply had to conquer fear of heights. All of us had to get out of our runner’s comfort zone and embrace something new. It was here where we learned much about everyone. 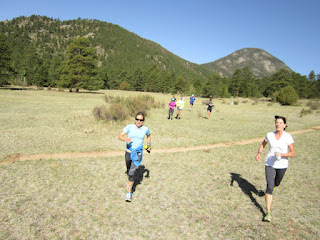 From Day One we knew the relative speeds and skillsets of each runner. He would be here and she would be there. Little changed in that regard. But on the cliff face we had a new set of skills to unlock. A camper who you thought might struggle instead succeeded.  One who may seem timid, was as bold as a lion. It was an absolutely glorious day and one that those who seemed to hesitant to accompany us on enjoyed immensely.

Later on in the week, as we all broke bread around the dinner tables, tales of life experiences and personalities abound were revealed. With ages ranging from the 30s to the 60s, the campers were a diverse group. However, we all loved running.  That was the tie that bound. 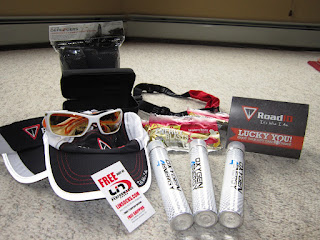 Again, I definitely want to thank SPIbelt, Oxygen4Energy, LinSocks, Julbo, ROAD ID and Stuffitts for their wonderful contributions to the camp. More often than not we were one matchy-matchy camp looking all done up in our cool duds and gear.


With questionnaires out and being scoured over, Terry and I will take the constructive criticism (and hopeful amount of equal praise ) and shape the camp to make it even better in the future. I know I am still learning and plan to never stop. The trails near Estes Park are a wonderful classroom.

Looking forward to a new set of students/teachers next May!
Posted by Dane at 3:46 PM