Three races in 8 days with thousands of miles flying in between is tough. I have done it before.  Many have done it before. Doesn't make it any easier. What makes it hard is when you have ridiculous airline snafus which cause major delays. I could go on and on moaning about these atrocities but we all know the saga. Instead I would rather talk about an event and the wonderful people I met during it.

For starters, I ran my slowest 10k time ever. In fact, it was almost the exact 10k time that I ran in the first 10k of the Around the Bay 30k last weekend. There are a multitude of reasons why it was so slow. Some I know, some are unknown. I do know my lungs are still messed up from allergies last weekend but I thought a few days away from that would make everything better.  I have learned, however, that I need to take better care of these lungs.

While there was a two day expo, I essentially only met people for one day. The airline snafus kept me from being fully engaged on Day One. However, I did get to meet an varied assortment of people by the end of the two days. Speaking at the expo allows me to tell my story and let others tell me theirs. Sure I get many of the same variances of people getting their life on track but it never gets old to hear so many are doing so. Often, I am blown away by the stories of self-improvement. 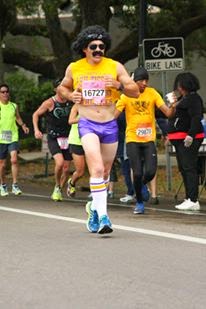 I often balk at the idea of mentioning some people by name because I am not sure if they wish for their stories to be shared.  Plus, I could list dozens of people who would just blow you away and still neglect to list dozens more. However, one group of runners names Team ASAP out of Lake Charles, LA deserve mention. Just a fantastic group of guys and gals who I had the pleasure to run into on multiple occasions over the weekend. This is a shout out to them in hopes that they continue to ignore their own impossible. Plus they dress really snazzy.

Weather-wise one could not ask for a better day in New Orleans in April.  It was in the low 60s with a chilly wind.  I guess one could ask to not have wind blowing them around but with low humidity, cloud cover and good temperature, it was hard to beat.

I lined up way further back than my bib allowed me to do so because I didn't think I would be all that far back form the start. I was wrong.  It also didn't really matter.  When the countdown hit zero and we shot out of the gate, I realized within half of a mile, this was going to be a slow day.  I had hoped for a nice 38 minute 10k on this super flat of courses but when the first mile felt like a 5:55 but was a 6:27 I realized nothing good was going to come out of my legs on this day.

As we left the central business district of New Orleans and ventured into the French Quarter, I hoped perhaps the first mile marker was off.  Plus, I got out of the pack a little bit and was passing people left and right. Assuredly this mile would be extremely fast and prove me wrong about the dead feeling in my legs.  However, as we turned off of the well-known bead-laden streets of Mardi Gras Town and ventured under the Spanish moss covered trees, the second mile revealed to me I was indeed going quite slow.

I now had a dilemma. What to do with a race that is basically over just two miles in. Do I struggle through and try to run a still-slow time? Do I full engage in the revelry that is the Crescent City Classic with its costume-wearers and beer drinkers?  Or something in between.  As I continued this debate, a couple of things entered my mind.

First, I came upon a woman with a completely hairless head. Obviously someone who had recently undergone chemotherapy or was still going through it, she was cooking along. Her spirit and verve absolutely made me feel horrible for giving anything other than my best.  I knew I could not jerk around and play fun on this race course.  Even if my time ended up being horrific I had to give what I had on this day.

Second, as I really began to contemplate jogging it in, I heard the pitter patter of little feet. I looked beside me and saw a shirtless young fella, who looked like he weighed about 50 pounds if lucky. I had seen him near the start of the race and actually fell behind him right at the gun. At the time I figured he was just running near the front to feel good about himself.  But here he was.


For the next mile I watched him carefully try to pick his way through people. Most were polite or cheered him on but only after he had passed them.  They were blissfully ignorant to him before that and often were unintentionally impeding his forward progress.


Finally, right around the 4th mile, I slid up next to him and asked him if he wanted a little help getting through the crowds. I don't think he knew exactly what I meant but I basically told him to tuck in behind me.  as I made moves and passed people here and there, this tiny charger stayed right on my heels.

For my ego's sake I would like to say I slowed down to run as a fullback for Little Stone Smith (I would later learn his name) but he was simply running as fast as I was on this day.  For the next two miles, Stone and I began to cut a swath through runners. I kept imagining I would either have to slow down for him or maybe I was running him ragged. But with every step I took, he was right there. It is fun to be both physically exhausted and mentally blown away by the skills of someone else.  This little runner made me think back to the article I wrote about what is the appropriate age for a person to start running.

As we neared the finish, I told Stone the race was all his.  We separated as the lane got a little wider and the runners got a little thinner.  Ironically, we passed one of my new buddies from Team Asap.  Nice mesh, Geoff!

The only thing pleasing about my 41:14 10K time was it was a palindrome. Without a doubt we should be happy for every opportunity we have to move forward by our own power.  However, we can still be disappointed when things do not go right.  Being glad and wanting more are not mutually exclusive.  For me, chances are I didn't help young Stone one bit.  Yet, while I am sure he gets plenty of support from home, I hope he also found a stranger helping him out as well, as something to remember.  His awesome effort, breeze of motion and seeming love for the sport stuck with me.

My best friend Shannon accompanied me on this trip and she too went through the same travel exhaustion.  She didn't run a personal best on the course but she too had a good experience. Was cool to see the French Quarter with someone who had been there before. My contact for most of the weekend Gini Davis, not only worked the race and expo tirelessly but also ran a 57:54 10k.  she is also 70 years old.  So on one end of the spectrum we have Stone. On the other we have youthful people who just happen to have circled the sun a few more times than most of us. 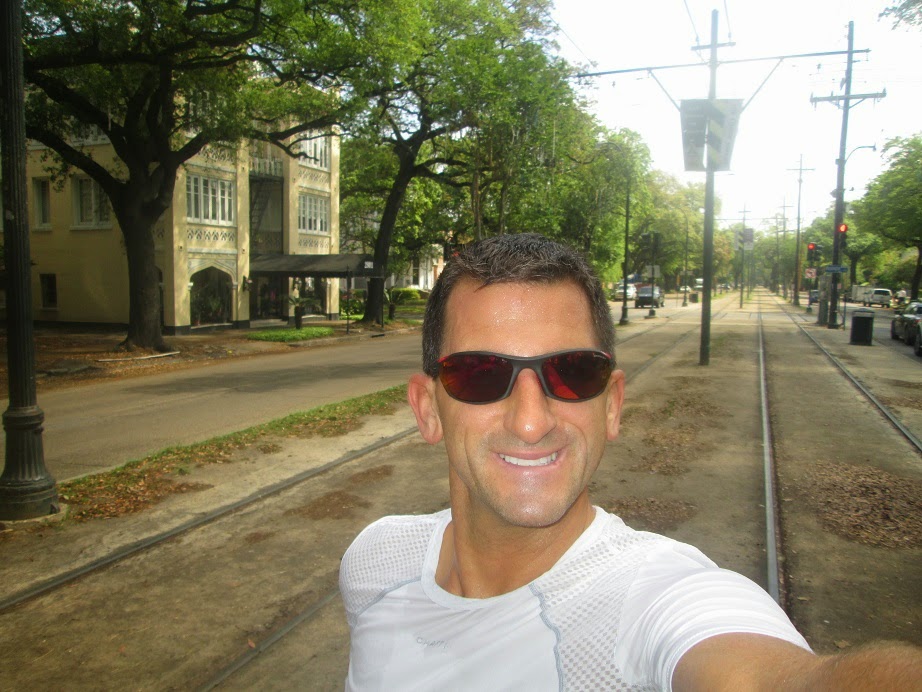 This was the third race which I declare is an absolute must-run for any runner out there.  Like the Cooper River Bridge Run I ran last weekend, you might not run our fastest time here (although it is absolutely flat so if you can avoid the crowds it is possible) but the experience itself is absolutely worth it. The warmness of the people and the spirit of one of america's great cities should be experienced on foot the day before Easter.

Take some time and go run the Big Easy, everyone.

Great job and great recap. I wish we could have formally met at dinner. I was with the blogger group sitting next to you. Its funny you mention Stone, he was my sons biggest rival in track/CC last year here in Mobile. Lol. The private schools have CC grades compete from 4th-6th grade, so they competed against each other last year. The difference was Stone was in 4th and obviously small and my don was in 6th and almost 6 ft tall. Lol! I have to say Stone kept my son on his toes all season. Great competition! Anyways have a great next race.