When a storm called for a temperature drop of about 20 degrees for race day from the previous day, I was excited. Then I realized how accustomed to Texas weather I have become when "77 degrees" counts as something I am excited to race in. 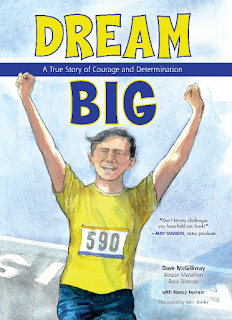 Arriving at the race, I was in a very good mood. I had just finished a wonderful phone conversation with the race director of the Boston Marathon and friend  Dave McGillivray. Always a pleasure to speak with him and I was excited to hear about his new running book for kids and how well it was doing. Check it out here!

While my most recent race at the USAT Off-Road National Championship had resulted in a DNF, I was feeling good for this race. My swimming as of late had been better than a long time. I knew I still wouldn't win the race given the speedy wunderkind who live in Austin, as well as a few others  but I knew I should do fairly decent. When I first started doing this series last year I assumed I would do a few, get my feet wet literally and figuratively and steadily improve. That wasn't the case last year and I hadn't started off that great this year either. But we put ourselves in the arena to attempt to get better and that is all I can do.

The overcast skies and cooler weather didn't make the water any chillier unfortunately. It wasn't warm but I knew I would be a bit sluggish at the start. The numbers were a little lower than normal for this race which allowed me to get a slightly cleaner start. In fact, after the initial burst of swimmers, I would say twenty yards in, I never wavered from my position in the swim. There was one swimmer right in front of me who I just couldn't seem to pass. I would get about waist high on him and then fall back. I decided that it felt as if I was swimming faster than usual so I shouldn't waste too much energy here on the swim. My run in this race has given me the most problems this year so I wanted to save some energy for that.

It is a real quick sum up of this entire swim to say that in his hip pocket is where I stayed until the final climb out of the water. We were separated just by four seconds as I stumbled a bit getting out of the quarry and regained my composure. For the first time since I have begun running this race, we had a timing mat as we got out of the water, giving us a true swim split  (instead of both swim and transition.)  Granted, I didn't see my time until later (I hit the wrong button on my watch like a moron) but my 11:42 is far and away the best I have swum in this event. Coupled with a not so bad :36 transition time (I stumbled putting on one shoe which cost me probably four seconds) and allowing the swimmer in front of me to run past me on the way up the hill, thinking I would track him down later in the run, and I hit the run at 12:12. If I ran the loops in 4:30 or less (which I was more than capable of doing) I would have my fastest overall time yet by a huge margin.

As I started the run I realized I had hit the wrong button on my watch. Fiddling with it almost had me going into a culvert ditch with a drainage pipe that ran under the trail. I veered off the stone path and had to deftly run around the pipe and stream and somehow miraculously did not break an ankle. Not a great start. Recovering, I decided to forget the watch and just run. As there is a clock at each loop I could do the math to tell if I was close enough to my desired pace.

The first loop was very pleasant for there was not a single soul to run around and no one out exercising to get in the way. I just had the one runner in front of me who was, much to my chagrin, steadily pulling away from me. I was hoping that I would catch my breath, settle down and soon I would be passing him.  I knew the first loop would tell me how hard I was actually running since I felt like we were flying. Upon finishing the first loop, I saw that neither was the case. I ran a 4:39,  which is just so frustrating. It was my very first aquathlon here where I ran my fastest run of all of these events. How that is the case is beyond perplexing. During the race, my first loop was a 4:25. To be so much slower angered me I am sure quite visibly to anyone watching.

The second loop gave me a chance to run around a few other runners as I tried desperately to open up my stride. I was obviously disappointed with how slow my first loop had been but passing runners always makes me feel better. Suffice it to say I find this course to be very challenging. The footing is uneven, there are some very tight turns, a few branches stick out here and there, and a beast of a hill on the back end always challenges me. Running just one second faster in 4:38 on this loop (compared to 4:23 in that first race) upset me all the more. 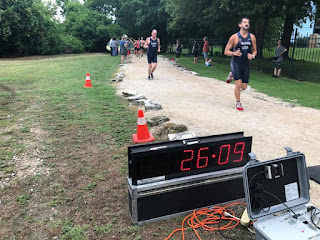 The third loop is where it gets quite congested but I knew it was four minutes of pain and I would be Unfortunately it was 4:33 of pain (compared to 4:20 in that first ever race.) I finished 10th overall in 26:11, having passed one younger runner and not getting passed by any. Forty-two seconds slower on the run when it should be forty-two seconds faster now that I know the course and every nook and cranny is a bit frustrating. I know I can be faster. I just have to keep plucking away.


Fortunately, I have another shot in a month. I doubt July's weather will be as hospitable as this race was but hopefully I will have figured out the right formula for success. I will never be fast in a short two-mile race and I know at age 42 I might have lost a step, but I refuse to admit that I can't drop this time precipitously, regardless of the heat, the challenge of the course, or anything else.

It's hard to beat a person who refuses to quit, they say.