I forgot how fun these are! 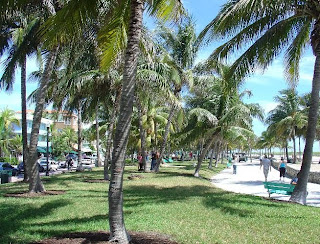 When I spoke to many people about running a half marathon in the past few days, they almost had an unanimous statement: "Oh, that is nothing for you."  Sure, 13.1 miles is decidedly on the low side of mileage when you compare it to my planned 204 miler in April, my 100 miler in a few weeks or even my 50 mile win at Iron Horse last month.  but the thing about running a shorter distance is that, well, you should run it faster.  And when you haven't been training to run "fast", it has the potential to hurt. Fortunately, it won't hurt as long though!

Another statement I hear from friends alike when they hear of all the exotic places I get to travel is how they are jealous.  I try to tell them that from the inside of an expo booth in a convention center, Honolulu in December might as well be Milwaukee.  Well, for once, I will admit they can be jealous as the 13.1 Miami Beach had me doing a book signing, outside, in Lummus Park on Miami Beach.

Here I got to mingle with almost every single runner as they would pick up their packet and turn around to face me and my table.  I was met with many of the usual statements:
1. "When are you going to do this?" 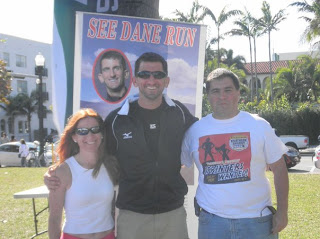 2. "Oh, that is you!"
3. "Well, these weren't consecutive marathons."
4. "You obviously did not work while you did this."
But after I explained, many were excited to hear about the adventure and very congratulatory.  Good attitudes are definitely helped by wonderful weather and I was able to make many new friends. 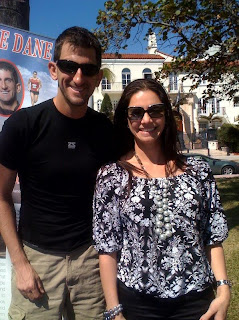 Yes, that is Versace's mansion behind me where he was murdered.  No, I did not know this until later in the day.  Probably a good thing.

I also got a nice one-sided face tan from the positioning of my table (I am an idiot) but otherwise enjoyed a beautiful day.  After the day was over, I exhaustedly climbed into bed the earliest I have gone to bed since I was about 9 years old and prepared myself for the 6:13 AM start.

Grumbling at my alarm when it buzzed at 4:30 AM, I quickly got moving.  I was afraid parking on Miami Beach would be atrocious so I wanted to get there early.  Arriving around 5:20, I actually got street parking 3 blocks from the start.  And it was free until 9 AM.  Good start! As the people assembled, I was called up to wish everyone a good race and an enjoyable morning.  I am pretty sure I mumbled something coherent as I was far from awake.  There was no "Hello, Cleveland!" fortunately.

As I mentioned, I have been doing little to no speed work lately, so I had no idea how this race was going to feel.  I thought perhaps I could run a 1:29 but maybe a 1:35 would feel better.  My left calf muscle is still bothering me from the 50 miler and the last thing I need with my big 204 coming up is to stupidly run fast in a 13.1 mile race and hurt it further.  So I thought I would play it by ear.

I was hoping the first mile was faster than what it was simply because it had taken more effort than I suspected to run a 6:37.  That said, after the first miler, I separated myself from a little pack of runners and was happy to run a few seconds faster on the second mile. My third mile was a little disappointing and I wondered how the heck I had managed to run twice the distance I was running today at 7 seconds faster per mile in my marathon PR.

At the 4 mile mark, we encountered the first "hill" of the course as we went over the first of two bumps in the Julie Tuttle Causeway. 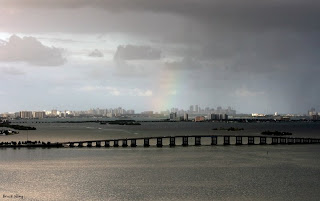 I have always felt I was a strong downhill runner but I have come to realize lately that I am a relatively decent uphill runner as well.  A large grouping of runners who had been quite a ways in the distance came closer with the first hill and were mostly passed with the second hill.  a I passed who I thought was the lead female, I told her she was looking very strong and had a sizeable lead on the next woman behind her.

The next three miles were a cat and mouse game between a handful of us runners a I would pass them or gain on them on either the up or downhill, and they would hold their ground on the flats.  I figured they were Floridians who hadn't done a lick of hill training but a look at the results later showed me they were runners from all over the country.

Each mile contained a clock to show elapsed time for the race (a VERY nice touch), and as we passed by the 9th mile and my time had slipped I thought about holding back some.  I was already running far faster than I had expected to run and there was no need to continue at this pace.  However, right before mile 10, I made 5 steps in the wrong direction of the course.  Astute and ready police officers quickly yelled for me to correct my route (for which I commend them.  It was me being in too much of a "zone" to realize I had gone the wrong way and their excellent work to get me going the right way.)  This little misstep lit a little bit of a fire in me and I decided to pick it up.

In the next mile I dispatched with some of the runners who I had been playing a game with earlier and was running down a few more runners in front of me.  I hit the 12th mile marker knowing I only had one mile left on the bike path that snaked down the beach next to Ocean Drive.  Hearing some footsteps behind me, it was hard to let the runner go when he passed me.  However, I kept thinking "big picture, big picture."  I then noticed I was awfully close to break one minute and having a time that would make me feel pretty proud.  Pushing the last half of a mile fairly fast, I was able to run a 1:24:58, good enough for 18th overall and 6th in my age group.  Coming in right behind me was one runner who had me in his sights for quite some time (apparently).  However, even though I beat his clock time by two seconds, he must have been quite far back in the pack and had a chip time about 20 seconds faster than mine.  In fact, he had actually negative-splitted the half-marathon which is just fantastic! 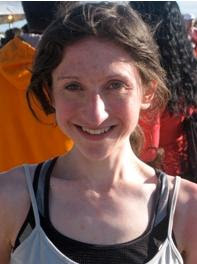 What was even more fantastic is that the second placer runner overall was Rebecca Robinson from Cumbria, England.  When I mentioned that I thought the other woman was in first place it was because I was not expecting that the actual first place woman was running a blistering 1:14!!


After the finish line, runners were shuttled into a tent where live salsa dancing was being performed a variety of fruits and bagels were there for runners to eat.  I was impressed the whole way around with this race from the organization, to the medals to the course and spectators.  The 13.1 Series is most assuredly clicking on all cylinders and I am greatly looking forward to experiencing more of their races soon.

Great pace! How can you run so fast and NOT do speed work?!

Thanks, Rhea! As for your question, "fast" is relative. I am sure there are plenty of people for which this is a temp run!

Thanks for the great review Dane. Will we be seeing you at 13.1 New York on April 3rd?