This past week was all about healing.  With my third consecutive half marathon approaching, I had originally planned to be doing tons of miles of running during the week as I did not have to endure marathons on the weekends.  However, lingering pains in my calf had all but sidelined me.  But look at it this way - it made me forget about the lingering pains in my Achilles tendon (and with the pains on different legs, I can now wobble evenly! I am all about positive spin.)


At the race expo (I realized I usually call it the "marathon expo" even though I am fully aware there are races of varying distances and therefore have to stop being so narrow-sighted) I realized that there was wireless internet to be had by all. So on the second day I decided to use this internet connection to document as many of the people who I encountered as I could without neglecting actually speaking to the rest.  I setup my Twitter account and chatted away, noting both the nice people and the jackasses.  (Someone mentioned I might have lost a potential book sale because I refused to play along with one of the latter and to be honest, it may make my marketing director cringe, but I don't give one hoot about losing one book sale if it means I have to be the me I always am.  Like me or hate me, at least I know you are doing so based on who I really am.) 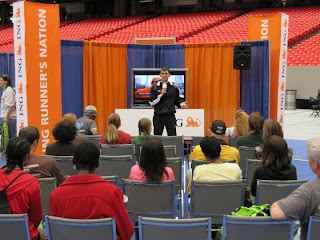 It was a fun experiment and really allowed me to share with whomever decided to read some of the wonderful people I meet who cannot always make it into my recaps.  And I also get to meet crazy-haired little blondies who are just so friggin cute that they must be documented. 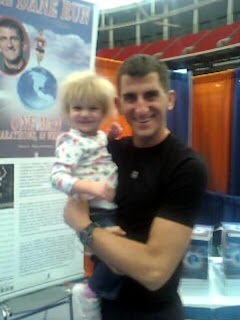 
My hotel was no more than 2 blocks away from the start of the race.  Man, do I love that.  For me, that means for a 7 AM race, I am waking up no earlier that 6:15.  Good thing too because I was up until close to 3am doing work. My travels lately have really played on my internal clock.  Usually I adapt to where ever I am without much problem but I just have not had any idea what the "real" time has been where I have been running the past few weeks.  Daylight Savings beginning (or ending?  I can never really remember which one it is until I think about it for a few minutes) has not helped much but I think I have just been worried about my leg and the upcoming big races I have.  But I digress.


The last time I had run prior to this race was at the Sarasota Half the weekend before.  I cringed when I realized how easy it was to go 6 days without running. I enjoyed the break, wanted to get out to run a whole bunchlike and did not mind not running, all at the same time.  I hoped to high heavens that my time off from running would make my leg feel better, if only to a slight but discernible degree.  While I had planned on running slowish) the past two weekends, a desire to enjoy running hard for a much shorter distance overcame me and I did nothing of the sort.  This time, as I walked down to the start, I forced myself to line-up behind the 1:40 half-marathon pace group leader.  If nothing else, the hundreds of people lined up in front of me would keep me in check for the first few miles. 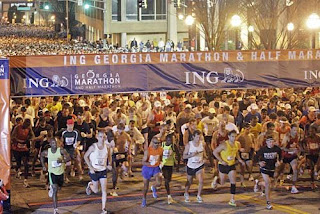 The first few steps of this race were tentative.  I was quite happy that the calf felt good but assumed the pain would return quickly.  It did not and as I picked and weaved my way through people in front of me, I was also being passed y people behind me.  My first mile was of a speed that I felt was right about where I wanted to be.  I thought I had picked it up a little bit more than I did for the second mile as the effort felt more than the clock told but it was the third mile which was upsetting.  Sure, the course had some undulating hills but it shouldn't take that much effort to do a 7:34.

Right after mile 3, a girl next to me who had been cruising along, sort pulled over to the side and made a retching noise.  It sounded like a half choke and a half- I honestly do not know.  Both myself and another male runner disliked it so much that we both stopped, retraced our steps and asked her if she was ok.  She nodded convincingly enough to make us both begin running again and after a few glances back I saw she was running again as well.  Something must have just gone down the wrong pipe.


I was surprised that my mile split was virtually the same as the last one, even given my turnaround.  something about that little a little fire in me and three much quicker than expected miles came out of my legs.  Somewhere around mile five, a few water droplets escaped the frowning clouds above and fell upon the skin of both the runners and the crowd.  While most assuredly not packed on the sidewalks, there were more than a few places where an enthusiastic throng of supporters had braved the predicted thunderstorms to cheer on the runners.  When a race goes through a neighborhood, I am always happy to see people out with their kids to watch the spectacle and am greatly disappointed when that does not happen.  It is not that I need the extrinsic energy from a crowd (although it is always welcome) but rather that adults are missing a prime opportunity to simply walk onto their porch or front yard and show their children how much fun can be had by running.  With the way our towns and cities are built anymore, often without sidewalks for children to run or ride their bikes, it is getting increasingly more difficult to not use a car for all activities.  But here are thousands of people running down the open street, closed off to traffic and for a few hours the town is theirs.

As the hilliness continued, we dipped into Piedmont Park for a brief period of time before heading back onto the streets, the full marathoners had been directed to the right while us halfers continued on straight.  While brief, this little section through the park was quite pretty. 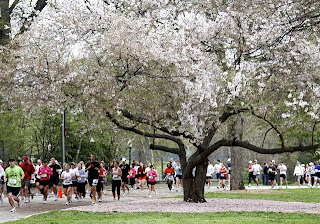 I was surprised at my two 6:51 minutes miles as much for the ease of which I ran them as for how I ran the exact same time twice.  I was beginning to feel decent and was doing my best to encourage other runners, thank the police and volunteers and just take in a lovely day. I also did some thinking and realized i need to get cracking on the t-shirts I plan on releasing.  I have a whole line of great sayings I have hear during marathons and marathon-inspired gear.  Stay tuned for that!

I thought I had seen the time correctly when I hit my watch at the mile markers and after the race I confirmed it: 5 of my last 6 miles were exactly the same.  That is hard to do on a track when you are planning it, let alone on a hilly course in a half-marathon where you are just running along.  Almost every runner I passed I would do so in sch a way where I would pull up to them, try to offer some words of advice or encouragement, and then move on.  We passed by a malfunctioning clock at mile 11 which was saying we had only run 34 minutes and some odd seconds.  I jokingly said: "great job everyone.  Right on pace for a 15 minute world record in the half!" One guy, who was carrying a little extra weight, snickered a little bit and we made eye contact.  I asked him how he was feeling and he said "Pretty good for my first half".  Given the fact we were on 1:35 pace, this was his first race and he wasn't the most svelte guy in the world, I was massively impressed and told him so.  He thanked me and as I pulled away he shouted: "Enjoyed your talk yesterday!"  That made me smile.


With about a mile to go I came up behind a young girl and asked her how she was feeling.  She said I am close to my PR but I am not sure I will get it.  I told her to straighten out her arm swing, focus on the bald guy about 100 yards in front of us and reel him in.  I saw her at the end and she set a new PR.


I myself, was quite pleased to bring it home in a time which I never thought I would have run this easily given how hard the first few miles had been.  the course was extremely well-marshaled, with clocks at ever mile (this is something that is just a fantastic addition if it can be done) and showcased some nicer parts of Atlanta.  But there are some challenges to it, that is for sure.


So my 1:33:42, a calf muscle which felt about as good I could have hoped for, and a few new friends made along the way was a good way to start my Sunday.  I went back to my hotel showered, grabbed a quick cat nap and then went back out to cheer on the bulk of marathon finishers.  It really is hard to convey to anyone who has not finished a marathon the look of joy and elation on some of these people's faces.  You wish you could download their story Matrix-esque and know what they have gone through to get to where they are.  Sure, some will be more inspiring than others and some will be quite dull.  But chances are you will be able to relate and feel good for that person. Even if he was one of the jackasses from the day before.

That is how cool running is.

Great article. Always enjoy how others can inspire and how you inspire others. Great article and fun to read! Hope you continue to heal!

Glad you enjoyed our little race, and it was great to see you on Friday. Wish I could get away to help with your little jaunt in April.

By the way, where were you at 7:01 on the marathon clock to cheer in a mutual friend and I as I brought him across the finish line ;)!

1L, I am unsure if that second part was a question but I am unsure what you mean. If you mean where was I at 2:01 PM on Sunday, I was on a plane.

Yup, 2:01PM. I was teasing as you mentioned watching runners finish after you were done.

See you in St. Louis. I'll be in the pacer booth on Sat afternoon.

Hey Dane - I met you at the expo (I hope I wasn't one of the jackasses!) and was pleased to get a signed copy of your book which I have nearly finished - great read. You gave me some advice for running a sub 90 minute half and I wanted to thank you for that. I followed your advice and it worked out almost perfectly. The last half mile was still a struggle, but I'll blame my training for that. I came in just over 1hr 26 so I was pleased. it was a pleasure meeting you and I look forward to following your progress on line in the future - you are an inspiration!