I cannot say I was not prepared for this weather.  Besides the wonderful new invention we have called the internet which allows you to see things in far away lands, the nippy teensies I had run in the day before in Jackson, MS at the Blues Marathon had forewarned me to my forecast for this morning: cold.  Not so cold you cry but cold enough that you whimper.  But as I mentioned to those who were running the First Light Marathon (and those in Jackson the day before), it is the extreme weather marathons that make the best stories.  Everyone remembers Chicago from 2007 and 2008.  Why? Because the weather sucked.  As such, we were here making memories.
Being in Mobile was obviously special to me as here I was in the place where I was raising all the money I did back in 2006 and beyond.  I had driven down from Jackson just a few short hours after the end of my race with my running buddy Sam Felsenfeld to both cut down on costs and also keep the other from passing out and wrecking the car.  Seriously, both of us were feeling quite good after a chilly run in Mississippi and were looking forward to hopeful warmer temperatures in Mobile.

I was able to briefly set up my books and meet a few new friends as well as more than a few runners who were also using the close proximity of the races to knock out two marathons in one weekend.  There is definitely room here for the two races to work together in the future to make this more official (The "Blues Light" Marathon, anyone?)

After getting to sleep in a wonderfully comfortable bed provided to me by the great people at L'Arche, morning came way too soon.  Fortunately, as in the day before, my hotel was mere feet from the start of the race and on a weekend with temperatures like this, that was greatly appreciated.

With music pumping and people jumping around, the sunny skies and seemingly windless area promised to be at least a tad toastier than the day before.  I found Sam and told him my plan was to run a 3:17 this day, having never run that exact time before.  He told me he was running by heart rate and perhaps we would run some together before splitting.

As the race got underway, we were picking our way through the throngs. Having situated ourselves a few rows back.  There was as gentleman before us who had a shirt that illustrated how he had gone from 330 lbs to 190.  I have mentioned how great it is that people take control of their lives and how wonderful it is to celebrate those who never let their lives get to that point, but it was wonderful to see Robert Lenzo out here using his limits. He dropped me an email later as per my request and I thought I would post some info about his journey HERE.

After the first few miles and perfect pacing (in spite of the iPod-toting girl who stepped on my foot and then copped an attitude when I expressed displeasure about her cutting me off to do so), Sam took me out in a mile that was little too fast for my tastes and I told him I was backing off.  I quickly fell back a hundred yards or so and just as quickly had to use the bathroom.  It seemed my body had finally warmed up enough to let me know I had to pee. 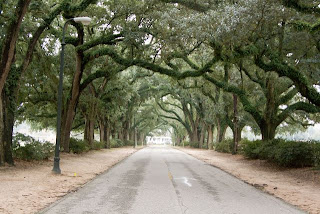 This desire almost made me miss some of the lovely homes and huge oak trees with Spanish Moss dripping down from their outstretched limbs creating a wonderful canopy over our heads. Fortunately, I remembered this beautiful street from previously and awaited with anticipation the mile long stretch westward.

The half-marathoners peeled off right after 8.5 miles and as always a little bit of me wanted to follow them, especially after having done 26.2 the day before. When they did, I could see one runner in front of me and then Sam off in the distance.  I knew the biggest hill on the course lay ahead right after 10 miles and concentrated on keeping my pace until then.  Surprisingly, a sudden urge to use the bathroom again hit me and I had to take a little pitstop.  But a few seconds later I was back running and climbing the hill starting at mile 10.

Getting to the top, I had a woman right on my heels.  I told her she had a great pace going and she, of course, had to take out her iPod to hear me.  (Stupid iPods!) We began chatting a bit and I mentioned I was going to run a 3:17 and as she was hoping to run about the same, decided to run with me a little bit.  Her name was Anna and it turns out this was only her third marathon. 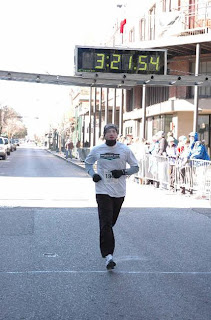 We soon approached and passed Sam only to fall behind him again.  Why?  Did Sam put on a burst of speed refusing to be passed by a woman?  No. Anna and I made a wrong turn and without Sam's shouts who knows how much further we would have run.  On a course that was filled with helpful spectators, take-charge police officers and wonderful people around, we ran right passed this one officer as she thought "we were doing our own thing".  With bib numbers, I guess.  In all honesty, the course was clearly marked with a huge white arrow but this just goes to show you what can happen when you are zoned out.  Either way, thanks Sam!

I could feel Anna champing at the bit as she pulled me ahead to some faster than planned miles.  I mentioned that if she were to just hold off until the last hill at 18 her that her patience would be rewarded.  Slightly at the top of the last real hill to contend with, we passed a female runner who was fading slightly.  I had kept count earlier and I thought there may be one woman runner left.  While Anna pleaded with me to run faster, I told her I had to run the 3:17 today and she should go ahead and crush the rest of the course. (Or apparently, I knew she had "a lot of rev left in her engine", which I don't ever recall saying but not all quotes can be brilliant.)

I also told Anna she became one of my favorite people when she correctly identified the birds in the pasture next to us as "Canada Geese" and not "Canadian Geese".  I hoped she would go on to win the race for that reason alone! 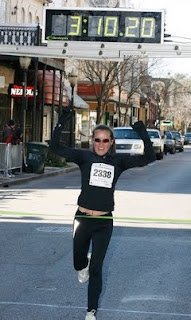 She quickly tore out of sight and immediately began putting distance between us after passing the 19 mile mark and the woman in front of us.  I tried speaking to this woman, obviously a Masters runner who had a guy and a girl running with her in seeming encouragement but I could tell she was tiring and speaking was not going to be fun for her. So I pulled ahead myself only to once again get hit with the urge to use the bathroom.  Fortunately another porta-potty appeared and in I went.  Guess I was hydrated!

My math skills told me, as I descended the last hill of the course and prepped for 5 plus miles of absolutely fast running, that I could average a 7:30-7:40 mile and still get into the 3:17 range. I was finally getting quite tired of this weekend and while the sun had stayed out all day to try and warm us, a little bit of wind had counteracted the G-type main sequence star's efforts. Slightly before mile 24, I encountered another woman who was faltering a bit. I told her if she stayed with me she would run a 3:17 but she said the problem was staying with me. I got her through about half of a mile before she said she had to take a break to walk. Normally, I would have tried to encourage her more but I had my own 3:17 to hit. 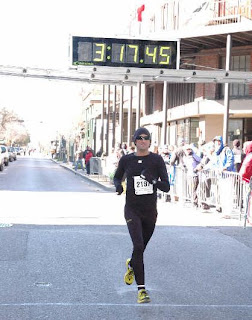 Making a right and then a left, I knew I had less than a mile to go and barring a cramp, my 3:17 would be had.  I encouraged a runner I had met at the Marathon Makeover Marathon last October to keep up his pace when he faltered a little bit.  When he motioned me to continue I told him we could tie if it would get him going again.  Anything to get his momentum going again.  This spurred him on and while he was well under his goal of running a 3:35, his legs seemed to jump to life.  Tearing down the final stretch, he finished a few second in front of me as I crossed the line in 3:17:46.  Knock another goal time off the spreadsheet.


It turns out that not only had Anna absolutely smashed her final 10k but by running a 3:10 she had won the race overall.  That makes two wins for her in three marathons!  Fantastic work, Anna!  Finishing up his own pretty special weekend, Sam was able to get a 3:21 and knock off his third marathon of a hopeful 60 for the year.

Without a doubt this weekend was a fantastic success for me and I could not have picked a better place to do my first ever marathon on back-to-back days.  My legs feel surprisingly well in spite of the beating they have taken in some pretty darn cold temperatures.  I think this bodes well for my upcoming 50, 100 and 204 mile races.  But as is always the case, only time will tell.  Thanks to all those who helped make this weekend so special.  I can only hope I returned the favor.

Wow! Not only are you a great runner, but you're also a great writer. Reading this brought back the awesomeness of the day, even though it was only two days ago. This is something I'm definitely going to read again when I need a boost. Once again, thanks for being a big part of a wonderful marathon experience. You are quite an individual. I look forward to keeping up with you and Sam and the year's endeavors.
P.S. You forgot to mention the canada geese...