This is the third straight year I have taken part in a race of some nature at the Georgia Marathon, running the half in 2010 and then 5k last year. It was also a very quick trip for me, at least when it comes to time spent in town. One of the things about moving to Portland is the extra hour and a half of flight travel to most destinations.  This is definitely adding to my time spent in transit but also increasing my frequent flyer miles. Good and bad, I guess.  I landed in the evening on Thursday and barely had enough time to grab a bit to eat before I was ready to crash.  I had only been home for 72 hour from the last weekend's excursion before jetting here to Atlanta. 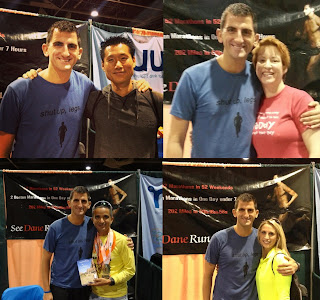 Ah, expos. I love you and I hate you.  This is where I get to interact with people, meet new friends, see old ones and learn and give advice.  But my oh my are you exhausting. I never thought that sitting and talking could be so tiresome until I did it. You speak to others who have worked an expo and you all share this knowing glance.  This is going to be a long day. But I am thankful for the opportunity and excited to see so many people. Just a little side note: I do have a rather good memory but if I haven't seen you in three years and you have changed various hairstyles or waist sizes, please remember that you don't have a big sign behind your head telling me who YOU are.  Give me a second and I am sure I will be able to remember far more about you than you know about me!


Unlike two years ago when I was flying out the door mere seconds before the race started, I was ready and at the race with plenty of time.  I had more or less crashed in my bed after the Saturday expo at a time I think I last went to sleep when I was 13 years old. This rest did not exactly rejuvenate me but without it I know climbing the hills of the course would have been rather daunting.


As I positioned myself where I felt I would be time-wise, I really had no idea what time I really had in me. It is only very recently I have felt like a runner again and this was not the course I wished to test my luck upon when it comes to time. Eighty-seven minutes would be great. Eighty-six would be even better. Let's just see what the day had in store, shall we.

I remembered from running this race two years ago that the first two miles are usually right about on pace and then for whatever reason the next two miles seem long.  Granted some of the bigger hills are in this section but you would think you are still fresh enough to overcome that. I knew, however, my time would be a little slower on any uphill as I flat out wasn't going to push it too hard. There might be a medal at the end and catered drink and directional service but this race really was just a longer run that other people could see the result of instantly. So I stuck to my plan of running the downhills hard and easing off on the uphills.


Now if you want to know anything about this race, then you will know there is very little time you spend running on even flat ground.  You are either hiking up or flying back down some hill or another. I don't know how man hills there are exactly in this half marathon but someone told me that they counted 58 times when they went up a hill in the marathon.  Oof.

Apparently my mind went blank over the next three miles as each time I forgot to hit my watch to get the split at the mile marker.  In fact, one of the times I think I stopped the watch completely before restarting it at the next mile. Given how easy my Timex RunTrainer is to operate I really have no excuse other than user error. 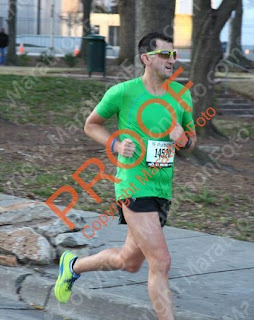 By this point I was right where I feel most comfortable in a race - with no one around me.  I usually do not like people around me as it tends to throw off my pace.  When someone is hanging onto my shoulder letting me take the wind or set the effort, it irks me a little bit.  But here, right around a 1:26 pace for the half, I felt comfortable.  I felt very comfortable actually. To hit a time in the 1:26s after travel, working an expo etc on these hills would feel mighty fine.  I was running by myself and able to think about a lot of things, as I often do while running.

As we continued to go up and down, through vibrant crowds decked out in the St. Patty's gear, I got lots of cheers for my bright green Craft shirt and Karhu Flow Trainer 3. The last name might be Rauschenberg but I have an entire maternal side of Irish flowing through my veins.  (Ironically, with that make-up, I don't like alcohol.  Go figure.)
Miles 10 to the Finish: 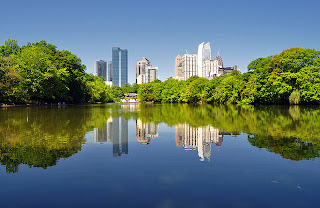 Coming out of Piedmont Park, the biggest hill of the course awaited.  You make a right-hand turn out of the grassy green wonderfulness with Lake Clara Meer wishing you goodbye.  Then- *BAM* urban jungle and goodnight Irene.  I started climbing the hill and immediately slowed. A runner appeared on my left and said "You really don't like uphills, do you?"  I tapped my nose and pointed at him and he laughed. "I catch up to you on every one of them and then you disappear when we get on the other side."  I laughed and replied, "Well, I guess I will see you in about half of a mile!"

Up and up we went but I knew while mile 10 would be the crest, there was another hill just waiting for us on the outskirts of Georgia Tech's campus. Shorter but steeper it was the same hill that laid me to waste last year in the 5k. Fortunately, I knew it was there and was ready for it.  The known is so much better than the unknown.

Here I was beginning to reel in a few runners and a few runners were beginning to put some moves on me to get by. I am not the fastest runner out there but I am able to finish strong. I can dig pretty damn deep and when it gets down to the last mile or so, regardless of whether it is a simple run or not, it is difficult to turn the competitive juices off.

As one runner and myself jockeyed for position, I could see that he wasn't really pulling away from me on this long final slow gradual hill that led to the finish.  While ever-climbing, I knew that there is about a 100 meter downhill finish, give or take, that I was revving up for.  I knew at the time, however, that it was probably all for naught.  Chances were good that this guy had started behind me in either case and was going to have a faster chip time when all was said and done. Nevertheless, I still wanted to beat him to the line.

When we finally turned the corner, I let go. I passed him with ease and heard my announcer friend Jeremy Pate give me a nice shoutout as we finished. With about ten yards to go I realized how silly it was to continue to push hard to run a time far slower than what I can do, let alone what I have done, so I eased up a bit. Some young buck went flying by me even as I held my ground on the chap I had been racing.  Turns out it doesn't matter either way as the chip times for all three of us changed our actual positions around willy-nilly.  But it had been fun to race. 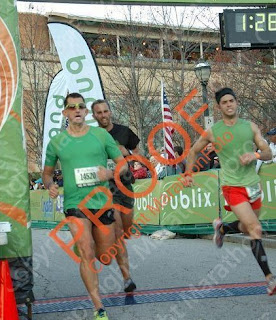 That is what I have missed since my bike crash last May.  Not only the feeling of racing but the feeling of knowing I could actually do it. I hadn't had the fire, nor the legs, to do either recently.  Only in the very recent past have they begun to return.  Admittingly, the desire to race falls in lockstep with the ability to do so.  If I can't really push myself, I don't really want to push myself.  It is rather cyclical and I hope the current cycle is ability returning.

I know that to truly race, I can't be working two long expo days.  It's just a fact. But that is the life I have and I love it. Tiring and vexing as it is, it is the life I have chosen. I feel I may have finally turned a corner and can get some speed back in these legs and see what I can do for the rest of the year.

I ended up with a little slower time than ideal, getting a 1:28:07 which was good enough for a new course PR for me and 76th place overall. I will take it. Another fine event from the folks at US Road Sports. I have lot track of the number of their events I have done and I am never disappointed.  It is great to be an ambassador for a company which puts on such wonderful events.  I will be at their Salt Lake City race weekend in just over a month for my first race back in Salt Lake since I moved. With the new course ending in my beloved Liberty Park, I am looking forward to running strong and fast!