It has been over two years since I ran a 10k race. However, the last two times I have run one, I set a new PR (even on the course that was waaaaay long.) Since that run,  I have gone the ultra distance way with my 350 mile running of the Oregon Coast and my Dane to Davenport this past fall.  Needless to say, I was not in "sprinters shape" and there would be no PR on this race day.  However, the way to get into that sort of PR shape, is to simply go out and get some. So, even though I knew it would hurt oodles, I decided to take on the Turkeython put on by the local Uberthons group.

The course had something I very much like: loops.  It also had a few things I definitely do not like: hills and crowded runspaces. And because it was 4 loops of a 1.55 mile loop, you would get those hills and crowds for, well, at least the last 3 loops! But Tootie and Natalie always taught me to take the good and take the bad.

As the race was run with hundreds of runners but on a relatively narrow runway (just one lane of traffic around a mall) there were waves sent out once every ten seconds or so.  As always I almost always line up a few rows back from the start.  Not many but a few.  Why? Because I am not the fastest guy there and I know it.  When I see people crowd the front who are just going to basically get trampled I want to offer them kindly advice to get the heck out of the way.  It is annoying and dangerous. But I was a bit too chilly this morning so I decided to simply side step them and move in front.   When the big ole bell rang for us to start, I was somewhere in the top 15 runners or so.

We immediately went around a bend and down the biggest downhill of the course. A right angle turn has up immediately going up hill.  Soon there after we had a nice long straightaway which would afford you the next chance to get into a rhythm. It was mildly uphill but nothing like the big ole beast right around the first mile of every loop.

After this it was basically some twists and turns through a parking lot or on the road surrounding the mall then on the way to finish the first loop. Hardly scenic but I could not have cared less. I was running hard and barely breathing. I also knew we had to do these hills three more times.

I tightened up a pinch on this loop and felt a little twang of disagreeing-with-what-I-was-doing in my hamstring.  So I decided to ease the throttle a bit and remember I wasn't going to be a hero today.  I was astounded at how many people were keeping ridiculously fast clips.  I always have been and always will be jealous of those blessed with lost of fast-twitch muscles fibers.

As we got near the end of the second loop I heard the quick pitter-patter of short legs.  A little sprite of a girl zipped by me. Some man presumably her father, said something akin to "100 more yards!"  Then I realized that most of the people in front of me were running the 5k.

Doesn't matter: they were still fast.

I knew this would be the toughest loop. Right when I started it a youngster appeared by my side.  We would spend the vast majority of then ext two laps pacing each other. Also, this is where the lanes were getting very crowded. Lots of families and people running with friends were doing so maybe three or more abreast.  It was a little dicey to say the least.

On the backend of this loop a car who must have been REALLY eager to get in line for the Black Friday sales the next day, decided to cut in front of me and my young companion.  I had to put a hand out on his chest to make sure he didn't become roadkill.   Almost stopped my race right there to go kick in this guy's fender. 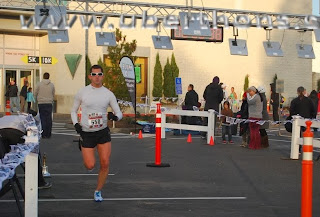 Coming through here I was surprised that I ran the exact same time as I had on the previous loop.  I just needed to run 10:00 for the final loop to get a nice sub40 10k time. Shouldn't bee too hard.

Unfortunately, it was harder than I hoped.  Part of that was my legs and lungs not responding the way I had hoped and the other part was the thickening crowds on each lap. Even with all of this I would have at least snuck in under 40 if not for the very last few meters. Each lap had a little split for the 5k and 10k runners to go on each side. It was a tight fit right on a corner.  As I rounded in full sprint, I almost trampled some poor lady who was realizing she was heading down the wrong corral.  My spinning pirouette would have made Baryshnikov proud but that stoppage kept me from sneaking in under my desired time.

Having said that, a 40:02 while hardly speedy, was enough to garner my an age group win. With this being the Oregon Age Group Championship race for the 10k, that means the guy with no fast twitch muscle fibers actually is a state champion in a sprint for a year. Well, how about that.

As I have always said, you can only race who shows up. 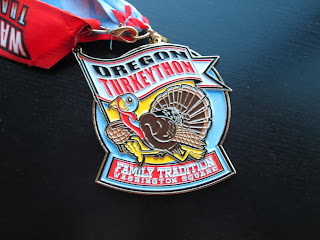 As with the Oregon Half Marathon I ran put on by the Uberthons people, the medals for this race were just resoundingly nice.  I have raced and won a 50 miler that had a smaller meal than this beast here. Dang.


Another cool thing about the day was my best friend Shannon setting a new 10k PR just a month after she set a 100k PR.  Now that is range, people!  Here's hoping you all had a wonderful Thanksgiving. Remember that the fourth Thursday in November is not the only time to take stock of what you have and be thankful.

Never a bad idea to do a little of it each day.