I had a little trepidation going into this marathon. With the reappearance of an old injury, slightly feeling under the weather and having spent my 8th consecutive weekend on the road, I was definitely a little tired.  I had also planned to run an exact time of 3:21 for this marathon which put a little pressure on me to perform.  Also, with each passing weekend, my 204 mile race in April looms larger and larger.

But as I talked to so many runners at the expo where I was signing books, I had to concur with them that one never knows what the race will hold until they get out there, lace up the shoes and move forward.

The race's expo was open prior to the race morning which allowed vendors to sell last minute cold weather gear to those who found the air a bit nippy, or to allow people to stay warm and converse a bit.  I  simply went over to my book signing table and sat down to collect my thoughts.  Within a few minutes I found myself engaging in conversation after another with people who had gotten my book and were really enjoying it.  One gentleman came up to me with a gruff voice and a stoic demeanor and said: "If I don't do well in the ultramarathon today it was because I spent too much darn time reading your book last night."  With just a hint of a smile he turned on his heel and headed out to run 31 miles.  I laughed hysterically.

The race had a corral system to separate runners but unless I missed something (and that is entirely possible) there was no rhyme or reason to it other than the elite corral which was heavily guarded by an officer in a cowboy hat (naturally.)  I tried to get back to where a 3:20 person might be but could soon see moving anywhere was not going to happen and no one was even attempting to use common sense and line up where they should.  This lining up in a proper place rant of mine is a common one and one I will continue to make until hopefully people will listen.  Marathons are indeed people's races and one that cater to all speeds but as a runner you simply must allow those who have earned a spot to be closer to the front the chance to actually get to the front.  one man in front of me simply said to no one in particular "I like being up here at the front.  It is a rush.   I know that in 20 feet everyone passes me but so.  Who does it harm?"  Well, sir, if you get trampled, it may be you.

But the ultimate chutzpah award goes to a rather portly runner, clad in a fuel belt and an iPod who was still in front of me about 50 meters into the race.  When they stopped abruptly to reach into their fanny packet for what looked like some sort of gel, one runner brushed into them (rather hard but seemingly unintentionally).  The portly runner gave an aghast look and shouted something like: "How about a little runner's courtesy here?"  Wow, did I find that funny for about a mile.

Starting on a nice little downhill we left the dowtown area of Fort worth and almost immediately went into an industrial area with some dilapidated buildings, etc. I am told this area is being razed and will soon (well, "soon" in development years) have high-scale housings and parks.  Definitely not the best area in the world to be running through but I am glad we got it out of the way.  Many races focus on the beginnings of races and forget about the middle or end.  In my feeling, the beginning is so exciting and full of energy that I don't need much more to keep me happy.  Save it for later.

Without going into much detail, I thought that this race might rival Pasadena's potty break stops.  In the first 10k alone I had three.  Let's just say I have an efficicent and well-tuned waste removal system.

Right after passing the 10k mark and slipping out of a port-potty I saw two rather inspiring runners.  One, who I had me the previous day, was named Courtney and she was in a wheelchair.  Very small in stature, I do not think I would be incorrect and guessing that she has spent the vast majority of her life in a wheelchair of some sort.  But here she was chugging along.  Was totally awesome to see her and when I passed I said hello and she recognized me from the previous day and gave a big smile and hello back.

The other inspiring person was this giant of a man.  A 6'1'' and somewhere in the 170lb range, I am a rather "big" runner, at least for the speed I run. Towering in front of me was a guy who I remembered seeing earlier but thought he was standing on a curb.  As I passed him I asked:" OK, sorry.  But how tall are you?!"  His answer?  6'10''. I did not know what race he was running but to be on a 3:20 marathon pace after 6 miles lugging that much of humanity around with him was quite impressive.  I should have glanced back to get his bib number but forgot to do so.  Kudos to you, enormous guy.

As we neared the halfway point, we passed by some luxurious homes.  In fact, a great deal of running on this course was past residential areas.  If anything, in the 33rd running of the Cowtown Marathon, I was a little disappointed the residents weren't out in bigger numbers.  It is not like this marathon snuck up on the residents (although, I ran into a high school buddy at the race who said, actually it had.  It surprises me when city's don't get behind their big races more.  then again, you ca only advertise so much and some will still be oblivious.  But I digress.)  If I was not running, and a marathon went past my front yard, I would be out in force.  Do not get me wrong, there were indeed residents out with their own aid stations and cowbells (and I am going to have to go ant-Christopher Walken here folks and say NO more cowbell) but there was definitely an opportunity for so much more.

My pace was feeling good and I was holding very consistent.  Don't believe me.  Believe the stats! 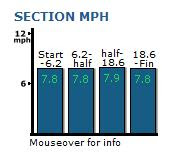 After running through a beautiful botanical garden which must look great in full bloom, we ventured alongside the Trinity River for a bit. One of the bigger climbs of the day was from miles 16-18 but running alongside Overland Park with plenty of supporters out made this section very bearable.

There were plenty of rolling hills on this course and while I would not say it was terribly challenging, it was  a course that presented some difficulties.  I was quite shocked to see that the winner ran a 2;31 but then again, there are all kinds of runners out there and some of them are pretty damn fast.

As we passed through Texas Christian University it was nice to see some, if not many, TCU students had woken themselves out of Friday night stupors (then again, being a christian university they were probably tired from long-prayer session, right?)  to cheer on the runners.


The problem with attempting to run a specific time which forces you to keep a controlled pace slower than you can or want to run is that once you are getting towards the end, it is hard to hold onto that pace.  In the last few miles I just wanted to be done.  My leg was aching, it was mile 22 and darn it, it was time to be finished and enjoying some ice cream.  But the goal was 3:21 so 3:21 it would be.

The great thing about miles 21-23(ish) was you got to see other runners at miles 12-14 heading the opposite direction.  It is alwasy enjoyable to pass along words of encouragement to other runners when you are on the course and to see them out their trudging along nearly 8 miles or more behind you but with a steely resolve fixed in their eyes allows you to be proud to be part of this running fraternity.


Nearing the 25th mile a runner passed me and I asked him how he was doing.  He told me he had about a 2 second window to get his Boston Qualifying Time.  I wasn't really on my "A" game today or I would have asked for his name to see if he got it later.  However, I did some research, and for a 3:20 qualifying time, there was only one 40-44 year old male who finished within a few minutes of me and it was Joe Terracina of Austin, TX.  Well, Joe's gun time was 3:20:59 which measn he made it by one second! (OK, OK in the interest of full disclosure, his chip time was 3:20:37 so he made it by 23 seconds, but still).  So, if this is you Joe, who passed me near the end, congratulations and forgive me for not pacing you in: I had a 3:21 to run. 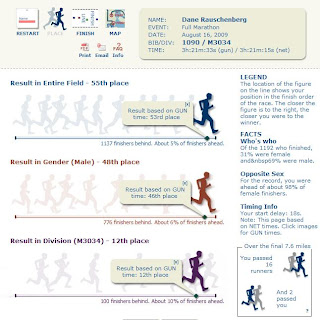 And I am not sure who the other punk is who passed me in the last 7.6 miles but I think I might have to find him and have a chat. :)
Now, it looks like three straight half-marathons (I say "looks like" as I think I am dropping down to the half for the Georgia Marathon; things may change) and then the Umstead 100 mile race to consume every weekend of March.  Last march I started the month by setting a 50k PR and then ended it with a 5k PR.  Hopefully, I can make March the month of PRs and add a 100 mile one to the mix.  Maybe I will even see if the legs have a fast half in them as well.