I haven’t had a race since June and haven’t had a race I’ve written about since I did my 6 half marathons in six days back in May. The fun relay I did in June had to be canceled at the end for a couple of legs because of weather conditions and it just didn’t feel like something I should write about as I don’t really have a full experience of all the relay legs.

I’ve been enjoying some really long training run weeks even while traveling all over the country recently and wasn’t really expecting to have any races on the docket. But a week ago I looked around me on Ultrasignup and saw that there was a Minnesota State championship for the trail 10 miler not too far away. As I have said many times, if there is a championship race that I can enter nearby me, even if I’m not prepared for it, I will likely do so.

Namely I don’t trail race often and I hate short punchy hills in trail races. I’m never able to get an actual speed going and it amazes me how bad I am at the uphill. But I had an off chance of winning this race outright based on who was registered and the “predictions” on the website. I thought that would be a nice little feather in the cap to add State Champion to my resume. Even after five straight weeks of 70+ miles and hardly a taper to speak about, I was convinced it was feasible.

The forecast called for the temperature to stay relatively cool in the mid 60s but rain throughout the region the days before left us with literally 100% humidity on race morning. I arrived a little earlier than I normally would simply because I wasn’t aware of the logistics of the area.  This meant I was also up earlier than I would have liked but a 9 a.m. but it allowed me to cheer on the people who started the 50 km race.  I did not envy them having to run in this humidity and that was before I even knew what the course was like.

Then I basically had to chill for an hour waiting for my race to start.  I meandered around, used the bathroom numerous times, and just trying to stay calm but focused. As we were lining up I was talking to a fellow runner and his wife (Chris and Sandy) who mentioned to me that a very fast runner was dropping down from the 50 km to the 10 mile distance. This threw a little wrench in my plans of hopefully not having to work too hard to win but that’s what is so difficult about winning races: You have to beat every single person who shows up.  It sounds like a no brainer but unlike personal bests or winning an age group, this involves beating EVERY person there. 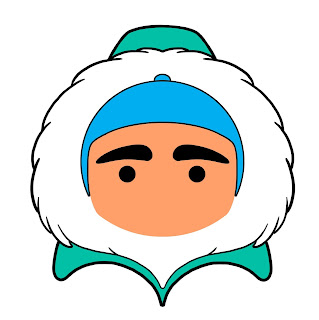 As we stood in the starting corrals the Race Director was very kind enough to single me out and ask me to say a few things about myself. As it was still early morning for me and I was barely awake, and there’s a few things I enjoy less than saying “Hey I’m Dane Rauschenberg and this is why you might think what I have done is impressive but you also might not so I guess you can decide for yourself!” I instead got information out to everyone about Sherpa. That made me happy as it is clear people were very interested in learning more. A few seconds later we were lining up to start the race.

There was a 5 km race going on at the same time as the 10 miler and as we shot out of the gate one of the guys who I knew was running the 5K took the lead. Shortly thereafter the runner who dropped from the 50 km usurped the lead at the front and began to assert himself. I figured if I had any chance to beat him I had to stay with him on the very first section of this race which included not only a little bit of asphalt running but a nice strong downhill. Nevertheless, as we entered the woods half a mile later, he was already a good 50 yards in front of me with no signs of slowing down.

At the 1 mile mark, the runner who was running the 5K passed me and I decided to do my best to try to keep him in my sight. About a half mile later another guy wearing a 5K bib passed me and thought they were going to have quite a little battle for first place. I was trying to decide if I had any chance to win this race and how hard I wanted to work if I was just going to end up in second place anyway. I figured I would simply see what happened in the next few miles until we started to hit the hills around mile four. Then I could make any further decisions. 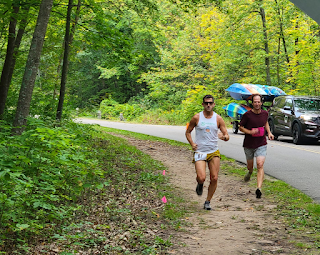 As we got to the start of the race course and the 5K lead runner took his turn the second guy in front of me continued on the 10 mile course. It was now clear he was running my race, and had signed up the morning of so I have no idea of what he could so. A quick glance over my shoulder surprised me as a runner was sitting right in my back pocket. He appeared to be one of the runners that I thought that I might have to contend with today when looking at the registrants earlier. So here I sat in third place in danger of being in fourth place pretty soon and lots of re-evaluations of what I was going to do on this race day we’re going into my mind.

Around 3 1/2 miles is where the hills really began to start and almost immediately the guy behind me began to put distance between us. I know the way to get better at things that you are not good at is to practice them but I race so infrequently in these conditions that the time spent doing so doesn’t seem to be well spent. But on a race course like this it really starts to get in your head that if you just simply out in a little more race-specific training you might be in a better position. Every downhill allowed me to pick up a little bit distance between us but they were far too many quick uphills that were making the distance grow.

I missed a turn at 5 1/2 miles but ran about 10 yards out of the way before regrouping and getting right back on course. About a mile earlier I had noticed that there was a runner behind me that was a little bit closer than I thought anyone would be. I assumed he was the other runner that according to the pre-race predictions was going to be challenging for first.

By now, I had long ago been drenched in sweat but as the hills lengthened I could feel the effects of the humidity taking their toll. It wasn’t getting any cooler in spite of the tree cover and relatively decent cloud covering as well. As I came out of this loop where I had almost missed the turn, I saw the lead female runner almost do the same thing. A long straightaway opened up and I could not see the runner in front of me. I wondered if he had gotten off course and had to backtrack the way I had and somehow might be behind me. Unfortunately, as I climbed a long straight hill to mile 7 ½, I saw probably about two minutes of running in front of me. I really wanted to make an effort to catch him but his uphill running game was far stronger than mine. I was resigned to finishing fourth even if I was pretty unhappy about it. 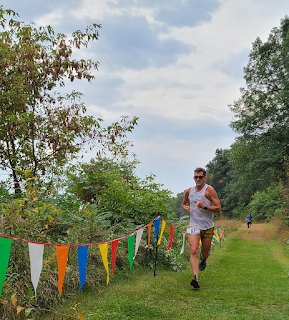 A nice deep downhill gave me some good feeling in my legs before two quick uphills stole that feeling right back. At about 8 1/2 miles there was a short half mile stretch that was nice and flat and I admit that I slowed down a little bit thinking that all was in the bag. However after a super steep uphill about half a mile later I turned around and saw that the runner behind me had closed the gap considerably. In fact, I found out later that in 9th and 10th miles he made up over 40 seconds on me. That’s pretty damn impressive. That said, as much as fourth place sucks I would be damned if I was going to cede it to someone in the last mile of this race.


I picked up the pace on a relatively flat section and put my head down.  I can occasionally make it hurt more than most and this was one of those times where I was doing just that. If he was going to take fourth place, he was going to have to take it; I wasn’t giving it to him. A surprise and precipitous downhill allowed me to turn on the jets and make the gap between us insurmountable. I might not be able to run up those very well but if anything I can do the downs.

With about a quarter of a mile left I could see the finish line ahead and simply glanced over my shoulder one time to make sure everyone was where they were supposed to be and finished in a time that was rather disappointing (1:19:19) but was all I had on this day.

The race itself was very well run.  The turn I missed was mostly my fault as I was just zoned out.  There were plentiful aid stations for 10 mile loop. It was, as with all trail races, a bit lonely. I do miss the crowds of street racing and that was one reason why I got away from trail racing for a while. Most of the time, when you are near the front, it just feels like you are on a solo training run that you paid for.

All told, definitely not what I was hoping to get from this race both by the end result and to let me know how I was feeling. I haven’t had a “fast” race in ages and this didn’t tell me whether I have any left in me. But I do best in racing when I race often so I am likely going to be cutting back on the miles and ramping up the races.


First off I have the Boundary Waters Half-Marathon thisSaturday as part of the Ely Marathon weekend that my company, Sherpa is the title sponsor of.  The weather looks much more inviting up there even if the course will be challenging. Exciting for all the things which will come from this weekend!
Posted by Dane at 4:10 PM