“A runner experiences no greater pain than the soreness following a race which goes poorly.”

I am not sure what greater thinker said that, but it is brilliant.  Actually, I just said it as I sit here feeling my quads twitch and nothing could feel more true. 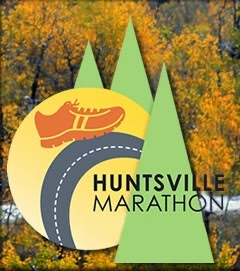 My desire to run fast and well at the Huntsville Marathon was greater than most.  I felt the course suited my strengths (downhill running), I had a good race two weeks prior at the Tunnel Lite Marathon and for the first time in ages was running with virtually no pain anywhere. Unfortunately, I forgot that while I was pain free I wasn’t exactly in good running shape.

In August I had partially torn my Achilles and while it healed quickly, I obviously had limited training. Furthermore, while the Huntsville Marathon does had an almost embarrassment of riches of downhill to its course, even a good downhill runner will get beat up on too much of the slope. Finally, any race which starts at 9,000 feet above sea level is going to take its toll on a runner, especially if said runner lives just a hundred or so feet above sea level.

All of this I knew but was ignoring. While the forecast called for scattered thunderstorms, the temperature for the race was predicted to be favorable. I have had just a small handful of “favorable” weather races in the past two years.  Couple that with my own running struggles and it can wear on one’s psyche a touch. Even a deluge of rain would mean a cloudy sky and I will take that over the evil life-sucking orb any day of the week.

A later than most starting time meant that even though I had to drive to the finish and then be bussed to the start, I would not have to get up at 3:30 A.M. to do so.  I was pleased with that. When light rain sprinkled a bit harder here and there, I was fine with that as well. I shared a seat with a rather newish runner named Tyler who was hoping to run sub 3:30.  He asked for a some pointers and I provided them.  Happy to report that post-race I found out Tyler had gone and done exactly as he hoped by hitting a 3:28.  At least one of us got our goal.

My goal was to hit any time starting with a “2”. Depending on the day, how far under three hours I went would just be icing on the cake.  As we lined up at the starting line, no one seem particularly interested in getting on the front of the line.  Given the winning time here last year was a 2:19, this was surprising to me.  I think the weather scared some people away.  So I lined up and when the gun was fired, I took the lead.

For a hundred yards or so, no one joined me.  I knew there was no way I was winning this race so I kept looking for other runners.  After a small barely there uphill to start (which even fully refreshed at the start still took my breath away) we began the long downhill to start the race.  My first two miles were far faster than I expected them to be even with the downhill portion.  I hit the 2nd mile and immediately pulled back on the throttle.  There was absolutely no way I was going to run a 2:45 today and that was what this pace would be.

Immediately a large group of runners (I counted 14) swooped by me. I laughed inwardly and perhaps, in hindsight, a bit derisively. I did not know for sure that this group would not be able to continue this pace. But I had a feeling there was no way they would.  With four women in the group, maybe I was wrong and all four of them would qualify for the Olympic Trials and then next year this race would have 5,000 women all vying for their best time ever.

The next few miles had times more in line with what I felt was prudent and I played a game of catch, pass, get caught and passed with a handful of runners. It amazed me that people running this speed did not know how to properly grab a cup of water from a volunteer in stride.  Even more surprising was this one guy who was employing a run/walk method.  He would pass me at a sprint speed and then a quarter of a mile down the road would come to a walk.  His watch would beep and away he went again.  As he continued to stay in front of me for more than a few miles, I wondered if he was onto some new and efficient way of training. (He wasn’t. After a while I would never see him again and not because he disappeared in front of me.) 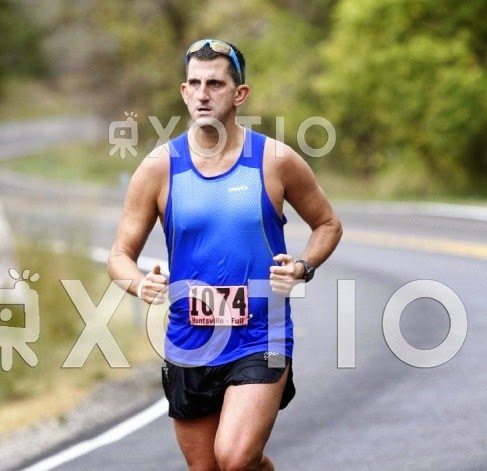 At 10 miles, I was still on pace for a 2:53ish marathon. I knew this would drop over time, especially when the race flattened out around mile 15.  Finally, at mile 12, the rain abated.  It had been far from horrendous but to run in a cooler climate without also being completely wet was a plus.  I hoped it would stay this way throughout the rest of the day. I hit the half marathon point at 1:27:30. I knew I could slow down my average for the first half by 25 seconds per mile and still go under three hours.

The 14th mile of any marathon is always important to me.  Having just hit the halfway milestone, it can often be a letdown. I use this mile as a barometer for the rest of the race. Here, the course was flattening but we were still around 6000 above sea level. I could definitely feel my lungs working a bit harder but I knew every second under a 7:05 mile put me that much closer to sub-3. This mile and the next were both right under 7 minutes. I only had eleven miles to go.

Then suddenly, it was over.  A 7:21 minute mile was followed by me needing to actually stop and walk for ten seconds. Seven people flew past me when I did. My 17th mile ended in a time of 7:55. Four miles earlier I was wondering how far below three hours I would get.  Here I was wondering how bad the rest of the race was going to go.

Two more miles over 8 minutes per mile had me stopping at mile 19. I grabbed a drink and felt something behind me. An official looking van pulled into the aid station. I walked over and said to the guy “Does this van go to the finish?”  He nodded and said “Sure does.”  I told him I was going to get on it and call it a day.  He said that was what he was here for and would get rolling in about five minutes. I sat down on the side of the road and contemplated how I would finally be DNFing my first marathon ever.

Minutes passed by and the van driver did not reappear. A few more minutes and I began re-evaluating my decision to quit. I wasn’t injured. I wasn’t putting myself in harm’s way. I was just going to run slowly and miserably for seven more miles. I have done that before and will assuredly do it again. I got up after what had to be close to seven minutes of sitting and started running again.

I thought perhaps if I could just run an 8 minute mile average I could hit a 3:07ish time and be pleased with getting back on the road again.  But that was simply not in the cards for me. More accurately, I would run at an 8 mile pace but only for about half a mile or so. Then I was reduced to standing, bent over, pulling on the ends of my shorts in an attempt to stay upright. It was baffling to me how when I could run I would pass dozens of others who were flattering but I could only keep it up for 800 meters or so. Then it was like I couldn’t move at all.

Part of the reason I had started moving at all back at mile 19 was the rain had again started and was raining harder. I knew sitting around and longer would just make life miserable. As the miles slowly crept by and I had just 3 more to go, the deluge came.  The last 5k was done just one step at a time. Hardy volunteers gleefully handed out aid and I stopped twice to apply Vaseline into my nether regions. The two plus hours of rain had washed all my Body Glide off and I could tell there was going to be some chafing. 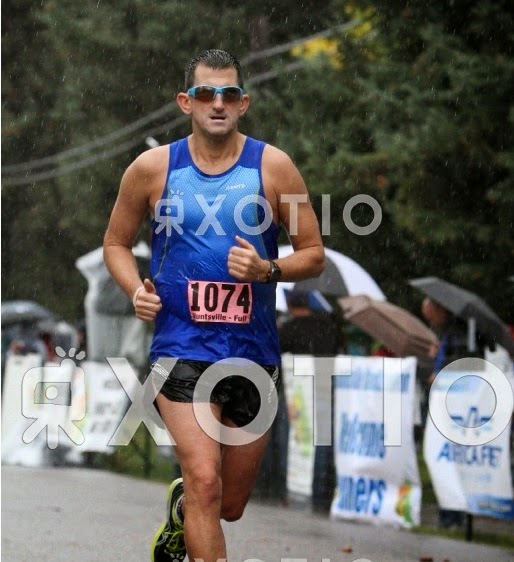 When the finish was finally in sight it was nothing more than a mercy killing. I gathered myself up enough to keep my time under 3:20 but my 3:18:25 was good enough for just my 103rd fastest marathon ever. I was shocked to learn I was 26th overall.  I felt like I was third from last. Later, looking at the results, I saw that only 5 people made it under three hours. That group of 14 who had gone out at a ridiculous pace only had two people who maintained close to it for the whole race. I took some consolation in the fact that every one of them were Utah residents who at least had the benefit of living at higher altitude. But I was nonetheless rather disappointed.

As a litany of friends told me, my 3:18 was something they would kill for. I obviously greatly appreciate them saying such nice things but it is no salve to my wounds. There had been a moment in the first three miles when I thought perhaps I would surprise myself with a new PR in this race. When I abandoned that for a slightly slower time of 2:52 I was already writing this recap in my head.  It was one of redemption and overcoming the past few years of bike crashes, staph infections, the flu and long, long, long running events. As it stands, that specific recap will have to wait.

The good news is that the Achilles in both legs held up. There were a few miles were it slightly protested in the manner it had before I had tore it previously.  At mile 11 I verbalized a plea out loud to my Achilles that “Today is not the day for you to tear.”  I should be (and am) pleased I could even return to racing just a few short weeks after tearing it. That is a blessing and not something I take for granted. But long are the days gone where just finishing a marathon itself will bring me joy. I don’t crave to have completions. I crave to run as fast as I can. Obviously this was as fast I could on this day. However, I know I have much more in me.

So, now with this marathon behind me (it had been on my mine and radar all year, regardless of what pace I planned on running it or even running it at all continued to change) I can work on rehabbing my Achilles fully. I can go back to the drawing board, analyze this race and see what I can do to take shots at getting faster again. The number of good races will always be not only outnumbered but overshadowed by the number of races which don’t live up to our expectations. I have come to grips with reality.

It’s just that the soreness in my legs keep reminding me that this last race was one of the group of many. Fortunately, it helps to keep me wanting more. Not for anyone else. Not to prove anyone wrong. But plain and simply because running as fast as I can makes me happy.