I ran the Bix previously four years ago. You can read that recap here. I also included it in my recently published book of absolute must-run races and you can buy that signed and personalized here. As I included it in said book, you can only imagine how highly I think of the event. I can say that after my second running of it, nothing has changed in that regard. 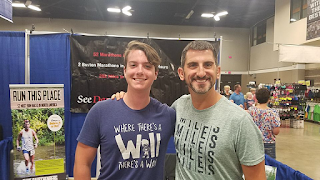 The two days before the race I worked the expo. Hardly working in the coal mines it is nonetheless tiring. And if you haven't stood for a 12-hour day, solo, signing books, making small talk, deciphering questions, and listening to stories, it truly is hard to explain how exhausting something like this can be. Nevertheless, it was wonderful to make some new friends, see people I haven't seen in years upon years, and everything in between. (Like meeting another Dane!)

I finally got food in my belly and was back at my hotel around 11 p.m. By the time I settled into bed it was well after midnight for a 6 a.m. wake up call. I wasn't expecting much for race day but was happy the weather was as forgiving as it was (but far from "perfect" as people kept saying - they obviously meant as much as one could really reasonably hope for in July in Iowa).

Logistics of he morning required me to grab an Uber to the start.  I knew it might be a bit touch and go as the quickest way to get where I needed to be would be a bit heavily trafficked.  Nonetheless, it went by rather smoothly and I found myself at the front of the race starting line without much trouble.  I tried to move back a few rows to get into a position which would be more commensurate with where I expected to finish but the crowd was so tightly packed that moving backward was impossible.  So instead I listened to both the entire rendition of Lee Greenwood's "God Bless the USA", the national anthem, a presenting of the colors by the Marine Corps, a military flyover, and I think a bald eagle crapped out an apple pie to be hit with a missile fired by Babe Ruth, too. (I honestly would be perfectly fine if no sporting event ever had any further connection to "patriotism" ever but that's just me.)

A countdown to a gun that never really fired (or I didn't hear it) and away we went. 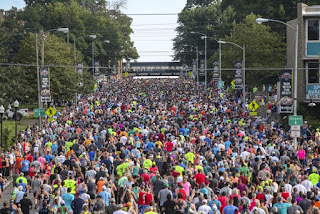 I have a whole 1/10th of a mile warm-up before the infamous Brady Street Hill took over my lungs and legs. An infamously bad early-riser, fast-starter, and hill climber, you can imagine I did not do well with the combination of all three here. I hugged the far right curb as closely as possible to allow anyone who wanted to pass me a clear path and just tried to wake up, get my legs moving, and last to the top of the hill. I am quite thankful that it was only in the mid-60s and relatively non-humid, that is for sure.

When I ran this race four years ago I knew I did this first mile in 7:13. I was hoping to be somewhere within 15-20 seconds of that this time. I wasn't as tired as I thought I would be at this point after everything I described above but I felt that was probably because I wasn't working as hard on this hill. Then I saw I ran a 7:11 first mile. Huh. To be honest, I was a bit scared now. Maybe I had worked harder than I should have and the second half of this race, which is definitely more challenging, was going to eat me up and spit me out.

The much more forgiving second mile had me a touch slower in 6:13 than my previous 6:07. But I had held back slightly on what is a mostly downhill mile here because of my fear of going out too fast. Perhaps if I held it together through the third mile, I might have a shot at taking down my Bix PR. Nothing to be that proud of (the average pace for that is almost 30 seconds slower than the pace for my marathon PR, just to put it in perspective) but I am just not a short distance kind of guy.

As we approached the third mile, which has the worst climb on the entire course, I was enjoying the "racing" aspect of this event. If you pay attention, you can quickly learn who around you is good at what. This girl would pass me on uphills and I would pass her on the downs. This guy could smoke me in flat portions but came to a walk on every uphill. On and on you can quickly learn who you will probably beat in a race and who you will probably lose to. It is a part of racing you miss in less populated races with a more spread out crowd. I have done enough trail races and small marathons to know that that sometimes I love these heavily-runnered events where there is so much chess going on around you. My third mile, ending right after that cruel hill, was way faster than I thought it would be. The new PR was mine to lose.

The course is not a pure out-and-back, so you turned around before the 3.5- mile mark. This

year I did not even think about taking on the slip-n-slides.  I also can't recall even seeing them.  But I was focused on the road. Heading back, even though I had 500 people in front of me, made me feel pretty good about being in front of 8000 others.  My biggest challenge lay ahead with the mile from four-five being the one which would make or break this PR attempt.

The long steady incline of this mile is at least broken up with a nice crook in the road which takes the entirety of the climb out of sight. As I played cat and mouse with those runners around me whose talents I had learned in the past few miles, something changed. The runners who had previously put distance between me on the hills were doing less of it. Those who hung with me were falling back. My lungs and legs were finally waking up. When I hit mile five, it wasn't the time I was hoping for but it was a time that told me I would be setting a new PR. The only question was by how much.

Running along tree-lined Kirkwood Ave, which comprises the bulk of the significant straightaway on this course, it was amazing to feel how, even in this mid-60s weather, the shade of the trees made running so much easier. The minute the sun filtered through it was as if a weight was dropped on my shoulders. Obviously some of that is mental but the difference was felt.

The sixth mile, the first to not have a street-wide banner going over your head to signify where you were, was also a little slower than I expect but I knew with the downhill finish leading to the straight and flat last half mile, the PR was safely in hand. I passed no less than 30 runners on that downhill, once again marveling at how well I run downhills and how poorly the uphills and sometimes the flats slow me down. 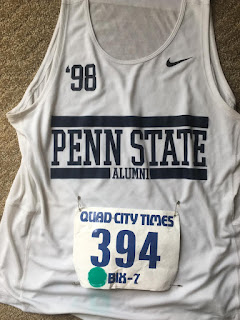 That's some consistency of numbers there, fellow statnerds!

on this year in the middle of the race. It has not been a good year for racing for me and I hope the latter half of the year picks that up.
Posted by Dane at 10:49 AM