Sometimes marathons just don't give you the most memorable results.  When you have hit 112 of them that can happen.  However, this  marathon here in Miami lacking any particular memorable exciting finish was mostly my fault as:
1. I was treating this race as a training run for the Rocky Raccoon 50 Mile race in 6 days;
2. I picked the right parents to allow me to run great with very little recovery but those same parents also did not allow me to be able to run in heat or humidity very well.

And Miami was warm and humid for the Miami marathon race day.

Not as bad as it could be but not to my liking, that is for sure.  But the weather was not going to change and with things that will not change, we must do the adjustments ourselves.  My original goal was to potentially run a sub-3 hour race to knock off Florida as a state where I had run under 3 hours but two long, exhausting but fun and fruitful days at the expo had me upping that time to a 3:10. Of particular note, I had the pleasure of meeting local running legend, Robert Kraft, aka Raven.  This gentleman has run the same 8 mile stretch of Miami Beach, every day, since 1975. Oy. 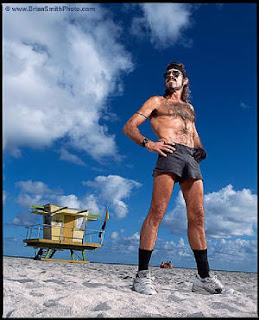 While this is not exactly my cup of tea, I admire his tenacity, even if I question his dedication to such a single-minded purpose.  Raven asked if I would join him on his Sunday run and even though I was running the Marathon that day, the 4 PM start time in which he was going to run enticed me.  Unfortunately, where I was staying and my racing duties made it impossible for me to get over there.  On my next trip to Miami, Raven, I promise I will do all I can to log some miles with you.

I also got to spend time with a variety of elite athletes including the likes of Elva Dryer and Arturo Barrios.  More details on those meetings and why they occurred will be revealed in a later bog.  All told, when I got to bed at 1 AM before the race with a wake-up call for 5 AM, I was hoping the temperatures and humidity would both go down.

Walking to the start, with thousands of other runners, I knew neither of my wishes for the weather would be coming true.  Standing in the corrals, many, including myself, were already sweating.  Ruh-Roh. That 3:10 goal was soon to go out the window.

Even with the corral start, one of my biggest pet peeves came home to roost. Many runners simply were not where they were supposed to be.  This is a oft-repeated lament of mine but dodging runners who wish to be at the front when they have not earned the right to be there is both annoying and potentially dangerous.  Here I was running slower than my position in the corrals designated and I was still passing people, marathons and half-marathoners left and right.

With the only hills in Miami being the bridges we crossed, we got the first one out of the way before the first mile was even done.  Humorous signs stated on the downside of each bridge that "This Downhill was brought to you by ING", the sponsor of the race.  I wondered who brought us the other side of the up part. 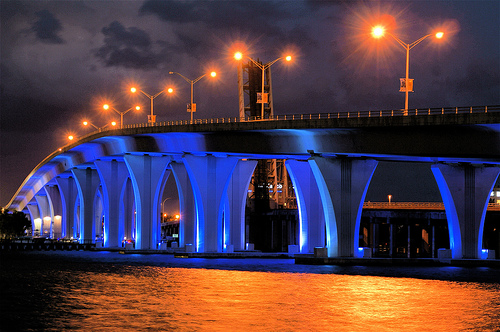 I had to dip into the portapotty and I was completely drenched in sweat.  Popping out, I ran into Sam Felsenfeld for the fourth time this year, already on his 6th marathon of Operation Jack.  I asked him how he was feeling and his answer was akin to "miserable".  Sam hates humidity about as much as I do.  I separated from Sam and past the 10k portion on my way to seven miles still running a little faster than I should have given the weather.

Around mile 8 or so, a daughter-father group appeared next to me and mentioned how they had seen me at the Top of Utah Marathon.  We spoke briefly and I mentioned how lucky they both were to be able to run with a family member.  Sarah, the daughter, was coming back from injury and was running the half and I am unsure if her father, Chris was doing the full.  Hailing from Kansas City, they were both quite happy to be out of the frigid Missouri temperatures and taking in the warmth of Miami. I may have enjoyed it a great deal more myself if I was "only" doing the half as well.  One of the cruelest things in the marathon is to be running along, feeling a bit tired and seeing the half-marathoners peeling off to their finish.

I had been running on and off with a few people here and there but mostly had this race to myself.  I was running in a no man's land of around a 3:10 pace but given my position in the corrals earlier was probably a few minutes behind the 3:10 pacer for this race.  Drinking as much as possible to try and fight the humidity of the race, I was occupying my mind by high-fiving spectators and talking to as many runners as I could.

The race turned to our right as the halfers went home and we suddenly became much more lonely.

Mile 14 is always a huge barometer of how I am going to do with the rest of the race.  The halfway point is now gone by as is the mindset of just making there. Almost inevitably there is a slight letdown and a slowing of pace for many people. Even though I had gone through the half in a pace of right around 3:10, I eased off the throttle and decided that there was absolutely no reason for me to run that speed here today.  Running 14 seconds slower than a 3:10 pace for mile 14 solidified this thought.

Around mile 16 a woman passed me and we chatted for a bit.  She had great form and was looking quite strong.  I am unsure if it was just my slowing down or her picking up the pace or a combination of both but she steadily faded into the distance.  By mile 18 she was just a speck.

I intermittently ran with runners who I caught up to and ran their pace for a while before they slowed and I pulled away.  I chatted with almost all of them if they seemed like they wanted to be chatted with and just tried to enjoy the day.  Closing in on the 20 mile mark I was definitely feeling the efforts of the day and realized that running a slower pace with a runner here and there had taken a little out of me.  One runner had, on three separate occasions throughout the race, come from behind, skirted right past my elbow and then cut right in front of me, even when there was a plethora of space on the road for him to pass without being a hindrance.  This third time, I tapped his elbow and his iPod-clad head turned to me where I held up one finger (not THAT finger) and said "One more time."  He obviously knew what he had done and it never happened again.

My life, both running and not, is filled with thoughts of "What was that person thinking?"  I honestly believe that if I had he power to force an answer to that question, regardless of the answer, I would be a happy person.  I just really want to "How did you think that was ok?"  I spent the next mile thinking about how I could turn this into a article for my Blue Ridge Outdoor Magazine, Running Matters.

Usually when I turn my thoughts inward, miles tend to go easier.  This was not the case here as the humidity stayed pretty constant.  Even as I was passing runners, which normally gives me a boost, I still felt like I was running in sludge.  If I saw a runner who was struggling or walking, I used this as an excuse to take a break and walk with them, offering encouragement where I could before beginning to run again on my own.

Around mile 21 the sun began to break through the clouds (which were ever present during the marathon which was one of the only saving graces of the weather for the day) and I figured at least I would have a good beach day afterward.  However, the sun just as quickly disappeared and the gloominess prevailed.

With about two miles to go I was walking with yet another fella having a rough day when Sam passed me looking strong.  Shouting a greeting to him, I saw him pull away as I continued to talk to my fellow walker.  He extolled me to catch up to Sam as his day was done.  I began to do so but had completely lost sight of Sam.  By mile 25 I figured he must have put on an amazing burst of speed until a loud commotion behind me when a woman runner fell had me turn my head and see Sam in the distance.  I have no idea when I passed him but at least he wasn't the one on the ground.

With the finishline in sight and a large and boisterous crowd cheering runners on, I passed under that most wonderful of spots, the finishline, in 3:18:55.  Upright, lucid and ready to take on the Rocky Raccoon 50 in less than 6 days.

That's a triple victory in my mind.