Going to cut to the chase and not bury the lede here: with a little over a mile left in the bike portion of this triathlon I got a flat tire. Well, that was when I realized it. I think it happened a mile earlier when I inexplicably started to slow down. As this flat happened when I was
1. only a mile away from transition
2. in a sprint tri
3. something I don't know how to do (change a tire) and didn't have a spare anyway

I was left with one decision: run in my clippity clop cycling shoes to the transition. That is not ideal in a triathlon. Or anything else for that matter. But how did I get to this place, my first triathlon in 3.5 years? 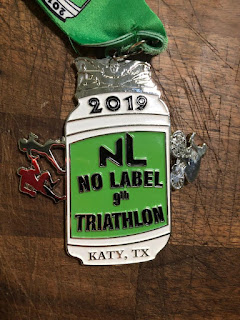 Earlier in the week I competed in an aquathlon in Austin. It went FAR better than I expected as it had been six months to the day since I had swam a single stroke. Feeling jumpy, I searched and found the No Label Triathlon in Katy, Texas which fit my needs of being relatively close, not being too long of a bike (I hadn't cycled one rotation since August 27th, 2018) and happening THIS weekend. I signed up and was excited to see what I could do.

The day before the race as I loaded my car and was pumping my tires on my bike, one the the tubes broke. Oh no. I don't have extras and I had to get going right then in order to make the packet pickup.  Luckily, I found a bike shop not too far from the packet pickup and acquired a tube. After they put it on for me and started to ring me up

As the race started at 7 a.m. and I had to be up at 5 a.m. because triathlons are exhaustively involved with their setup, I went to bed at a super early time for me. I woke afresh as I possibly can at that ungodly hour and headed to the start of the race.

The swim portion was a tad different with the 300 meters being swam in a pool where each swimmer would go up and then back down a lane before doing a flipturn under the laneline and into the adjoining lane. If you are a decent swimmer this is not too hard, just a little odd. Unfortunately, there were roughly 400 people who had to do this. The only way it was possible was for each participant to seed themselves according to ability correctly, then go off in roughly 10-second intervals.

I did just that and looked like I was about in the right spot beginning maybe about 20th overall. When it was my turn to leap feet first into the pool I took off with gusto. 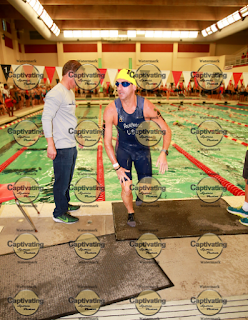 At no point did I feel settled in this swim. I felt fine but never like I was swimming fast. About half
way through the swim I had a guy right on my feet. I was perturbed I was so slow so I waved him past. Then I spent the next half of a swim right on *his* feet. I think he sorta shot his wad in the first half of the swim and I should have been less polite and simply stayed where I was. But it being such a short swim I knew it didn't make much difference either way. I was not here to win the race.

I got out of the pool not knowing exactly what my time was as I had not started my watch. I knew it wouldn't get a signal in the natatorium so I just had it set to catch my bike and run. Unfortunately, I literally had THE longest run to make in order to get to me bike and THE longest run with my bike to leave the area. Nevertheless, my transition was fair. I looked at some of the others who cut my T1 time in half and figure that couldn't be ALL just bike placement.They definitely have their stuff down. I know I do not.

I struggled a bit getting my feet clipped into the bike which cost me a good ten seconds. Even though I was all the way over to one side some overzealous guy ran into the back of me with a "Jesus!" I said "Yes, he is risen tomorrow but I'm sorta stuck here for the moment. Not sure how you didn't see me."

The weather was just perfect for this race. Absolutely wonderful. Next to no wind, barely above 50 degrees, mostly cool and relatively dry. And the bike course was extremely flat with basically four turns. It was well-marshaled by the police officers, the cars on the road mostly gave us a wide berth, and from all of that standpoint, it was good. In fact, kudos to the race directors indeed for how well they organized this race. It was well-run for sure throughout in what was definitely a bit of a challenge to put together.

Unfortunately, cycling on the shoulder of this one highway was kinda crappy. The road was rather rutted, with marbles for rocks in a lot of places, and not a smooth surface. When we left the highway for about half of the ride onto some other streets, it was much better. However, when I was barely 2 miles into the ride and saw one cyclist pushing his bike back, that tight feeling in my stomach hit me a bit. I haven't done many tris but I have never had a flat in a race. I sure hope I didn't have one today.

Most of the ride was uneventful.I had a few cyclists pass me but by and large they were riding those $10,000 per wheel bikes. ("Oh, but Dane, it's not about the bike!" No? OK. Trade me.) My speed wasn't exactly what I wanted it but at around 23 mph, I felt good. I passed a few cyclists and felt like it was an even trade for those who passed me and those who I passed.

Then, mere feet after seeing my third cyclist on the side of the road with a flat, I noticed the lethargy I expected to get but never felt in my legs was really getting to me. Soon, I realized it wasn't lethargy but a flat tire.

I debated trying to ride my bike for the last mile-plus but was certain that would do some serious harm to my rim. So I dismounted and stood for a second. What do I do? I guess I will run.

As fast as I could in these infernal cycling shoes, I horseyed my way along, doing my best to stay out of the other cyclists way. With about half of a mile to go, I took my bike off the road and onto the sidewalk on a narrow turn. When I bounced down on the other side over the curb my entire front wheel just flew off. I caught it in one hand and stood there: flat tire and frame in my left hand and a wheel in my right hand. To say I was a bit frazzled would be an understatement.

Triathlon has oodles of rules. I was certain me running in with my bike was allowed as long as I kept my helmet on. But I was unsure if I could carry my bike and have the wheel in the other hand at the same time. So I sat down to put the wheel back onto my bike. Thanks to Strava I can see I spent exactly 2:01 putting that wheel back on. But I finally got to the second transition.

I am very intrigued by the fact that my two transitions were only one-tenth of a second off of each other. I also wasn't exactly in the fastest of moods either knowing I had lost approximately ten minutes to my flat tire and errant tire (Kenny Rogers voice: "You picked a fine time to leave me, loose wheel!") But I made the effort to get here, so I was going to run. Also, I say this is my first triathlon in 3.5 years. That's not entirely true. I attempted an Xterra off-road tri last summer that had me DNFing a third of the way through the bike after my umpteeth crash. So, surviving any calamity and getting to the run mean I could at least give it a go.

This was a very enjoyable run with just a few turns, a nice jaunt past the Katy City Hall building, and a mostly tree-lined green-visaged route. I made note of these niceties but for the most part I had tunnel vision wondering how many of the people in front of me I could put behind me. Each one I passed spurred me on faster and I wanted to snare them all. Like Pokemon!

Into the last mile I could only make out two runners in front of me and I didn't have a chance to catch them. Then suddenly I had a chance to catch one of them and did. Then with .3 of a mile left I suddenly had a chance to catch the other one. I turned on the jets running right around 5 minutes per mile but it looked like I was running out of real estate. He heard my steps and picked up the pace himself and as I dodged a pot hole and ran into a narrowing chute, it was obvious I wasn't going to be able to catch him. I ended up just about one short of passing the guy. I wasn't too bothered as who knew how far he had been behind me before my bike incident and he might have finished minutes of ahead of me on his chip time anyway. Furthermore, it was about my individual effort on the run here that mattered most to me, not the placement. (As suspected, when I saw the results later he finished 3:30 ahead of me anyway.) When I later saw my time for the run (6:30 pace for the three miles) it pleased me exceedingly. 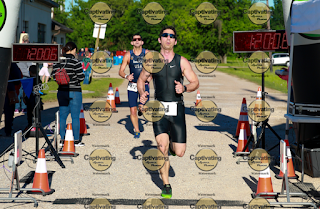 All told I finished in 1:17:32 which was good enough for 85th overall out of 381 finishers.  If you just removed that two minute stoppage to put my wheel back on I would have finished 62nd. Now, subtract another 8 minutes at least for my flat tire. (I say that number based solely on one cyclist on Strava who started a little behind me, fell a little bit further back, and then when I really started to get a little tired, but now realize was my tire going flat, passed me.  He did his bike in 41:33. As we hit that last straightway he was over 30 seconds behind me. So eight minutes is conservatively the time I lost running instead cycling that last mile-plus.) That alone puts my 1:07 time 26th overall and tied for second fastest in my age group.

My biggest takeaway from this event are I am glad I didn't crash and that I am in the best racing shape I have been in for a very long time. To do so well in the swim and bike with zero training makes me very happy. To run some of the best speedwork in a race at the end of a triathlon I had already sorta given up on was even more stellar. I am extremely excited to see what the rest of the year has in store for me.

Fun Fact: The Overall female winner and third overall male are from a relatively small town in Germany which just so happens to be the same town one of the athletes I coach resides in. Was a bit of a shocker to see that!