This was only my third race of the year. My second race of the year was three days ago at a three hour trail run in Bremond, Texas whose recap I have yet to write. The fact I made it to mid-April with one race under my belt is a testament to how "off" a year this has been for me. A sickness for the better part of six weeks helped nothing at all and it was only because I thought the weather was going to be nice for the trail race that I even attempted it. (More on that later.)

I raced this aquathlon series last year, missing only one race after I was assaulted by two men whom the police never arrested and the DA's office never charged in spite of me jumping through every loop you can imagine for six months.  (Thanks, assholes!) I wasn't sure I would do it again this year, having not swam one meter since last October when I qualified for the World Championships in Denmark this July but won't be going. But after my race on Saturday I knew I had to sign up for these if only because of their convenience to my home and how I do best when I race myself back into shape.

The format for the event was simple: one 750meter (ish) swim in an unbelievable cool quarry that Pure Fitness Austin apparently owns as part of their gym (I am extremely intrigued how much that cost or how they came to own it) then three loops of a 1 km(ish) loop around the quarry. I say (ish) because, well, the race says so itself and without a doubt the 3 km (1.86 miles) is definitely 2 miles. Sounds nitpicky but .14 of a mile at 6:30 pace is another 55 seconds of running. 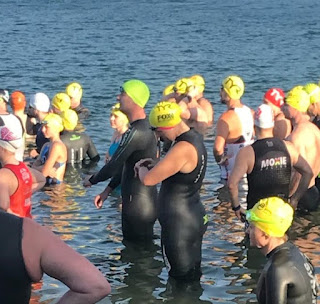 I got into the water where people were wearing wetsuits and other accoutrements and in spite of being a bit chilly it was not bad at all. I relished this as I remember how much it turns into soup in the later Austin summer months. As we started off, more than a little unnecessary pushing and shoving by people who had no business being at the front was a bit frustrating.

I could tell this wasn't going to be a fast swim but after say a third of the swim I finally started to feel good. I more or less stayed in the exact same position for the entire lap of the quarry with me passing one guy about half way through and a guy passing me with about a third left.

As I got out of the water, I looked to see my time and was confused. Something had happened to my watch and it wasn't recording. Then I pushed some buttons and saw it was recording the time but it hadn't grabbed the GPS. Some of the kicking at the start seemed to have clicked a button or two. Oh
well. I fiddled with that far too long as I climbed up the (now paved) ramp to transition. 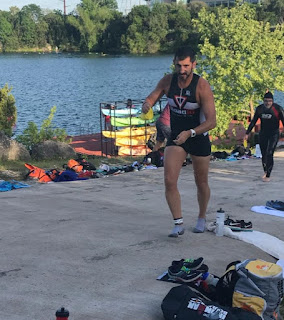 I was a little slower getting through the transition than I would have liked but it still went pretty smooth.  When I hit the start of the run I was pleasantly surprised to see my time of swim and T1 was 12:50. I expected it to be much slower.

One chap had left the transition just a few seconds before I did and I assumed he would be easy prey for me to run down. I assumed incorrectly. He shot out like a lightning bolt and within half a loop he wasn't in sight anymore. He ended up running the fastest run split by a WIDE margin but only finished 8th overall because of his "pedestrian" swim.

As I approached the end of the first loop I prepared for the worst. I know I am capable of running under 4 minutes for each loop but the fastest I have achieved has been 4:18 or so. Here, however, I was fully prepared to see a 5:00 on my watch. When it came through in 4:38, I was pumped. 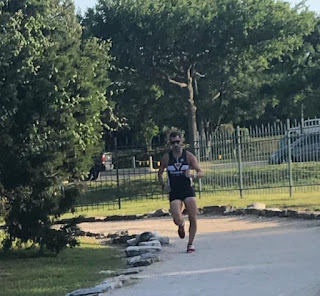 I began the second loop and I knew it was more than likely that the overall winner would lap me. I was hoping for that not to happen but given my overall time it was destined to be so. About halfway through this loop, sure enough he did. I tried to stay on his heels but he was just a superior athlete to me. However, on one section of this loop (which is a surprisingly difficult loop because of the footing and the tight corners and the small hills in it, not to mention the people who are also doing workouts and seem to care very little there is a race going on in tight quarters) I saw him veer off the path a bit and run next to it on the grass. How I had never thought to do this in a section that had the biggest hill, in the the loosest footing, is beyond me. I hit the second loop in 4:36 and was ready to give it all I had.

The third loop presented more of a challenge as now there were many more people on the course.  I had one woman who was passing more than a few people who seemed to be unaware I was on her tail.  I finally had to cut inside to get around her. Then I saw a gentleman in front of me whom I was fairly certain actually was in front of me and not behind me by a loop. I passed him with half a loop to go and then set my sights on using the little footing "shortcut" I saw the leader use the last loop. It was a godsend. 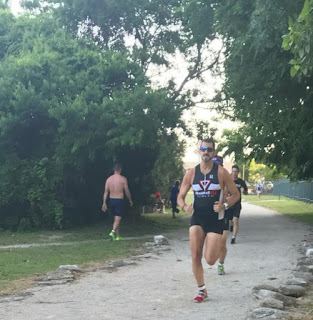 Up ahead I could see I was closing on two runners but I was unsure if they were a loop behind me or not. As I hit the final stretch, which is a slight downhill with good footing, I gave it everything I had and passed them both. Then the kept on going as they had another loop to go. No worries as it helped spur me on to a 4:28 loop and a time of  26:35 and 15th overall.

This was actually the same time as one of my races last year and faster than another. I know the "cooler" temperatures helped even though this was one of the warmer days in Austin this year but it made me feel quite happy about what could be in store for the rest of this year.