I returned to the Des Moines Marathon as a speaker and a runner for the fourth time since 2008 for a multitude of reasons. Having one the marathon once, the half marathon three times and paced runners as part of their pacing team three times as well, I have yet to experience a race which didn't live up to its ever-burgeoning standards.

On all four occasions the weather, which can rarely be counted upon in the Midwest at any point of the year, has been stellar. The race organization is top-notch. The overall experience has always been enjoyable. This year was no different.

I stayed on the east side of town knowing that it would allow easy access in and out to the starting line on race morning. Doing so put me in an area that might not have been the nicest section of Des Moines but also allowed me to see something new.  For the three days I was in town, I would begin my day with a run in a local cemetery named Laurel Hill.  Oddly, Des Moines has two cemeteries with that name separated by
roughly 9 miles.  I don't know why, they just do. 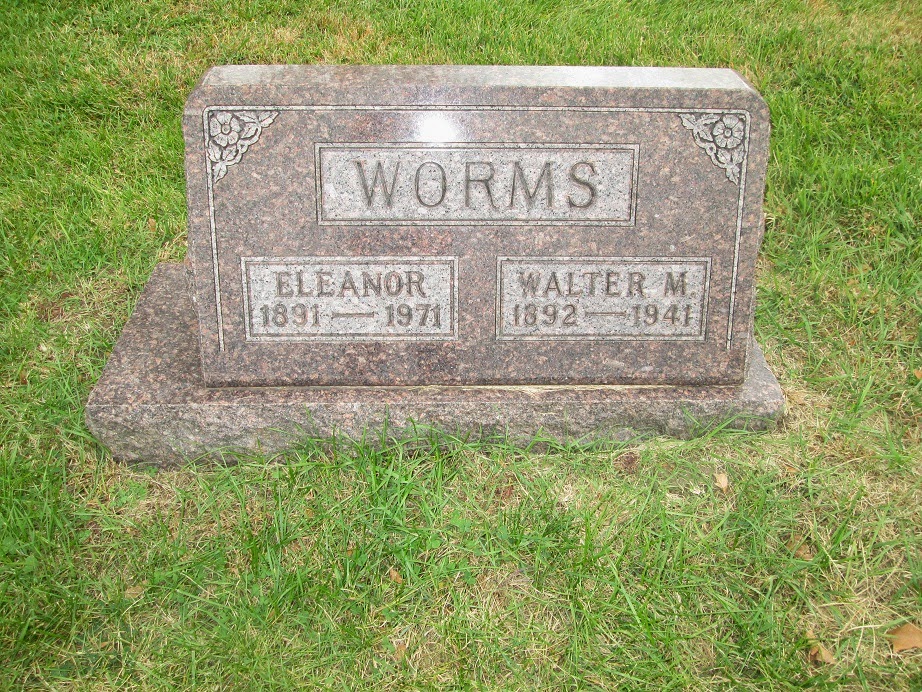 Having written previously about running in cemeteries and wondering if it is kosher, I was again reaffirmed by my decision to do so by three very pleasant runs around a rather hilly loop. I was also treated to a little humor when I saw a headstone with the name of "Worms".  Now, that is just rubbing it in, I thought.

My participation as a speaker at the expo also included me pacing the 1:40 half marathon group.  running this time actually presented a challenge.  I have run 78 half marathons and only four have been slower than 1:40.  Two were pacing efforts, one was a fun run I did and the last was an extra 3/4 of a mile long run I did in my fastest 70.3 triathlon ever. running that speed (note, I did not say "that slow") would be something I would find a little out of my normal running. As such, it would keep me on my toes.

I agreed to run this time mostly because of this challenge and for the chance to bring in more than usual the number of people I do when I pace. More often or not, regardless of how big the group starts off with, when I get toward the end, I may only have one or two people with me. Sure, many more will be not far behind but just as many take off near the end and even many more set PRs nonetheless. 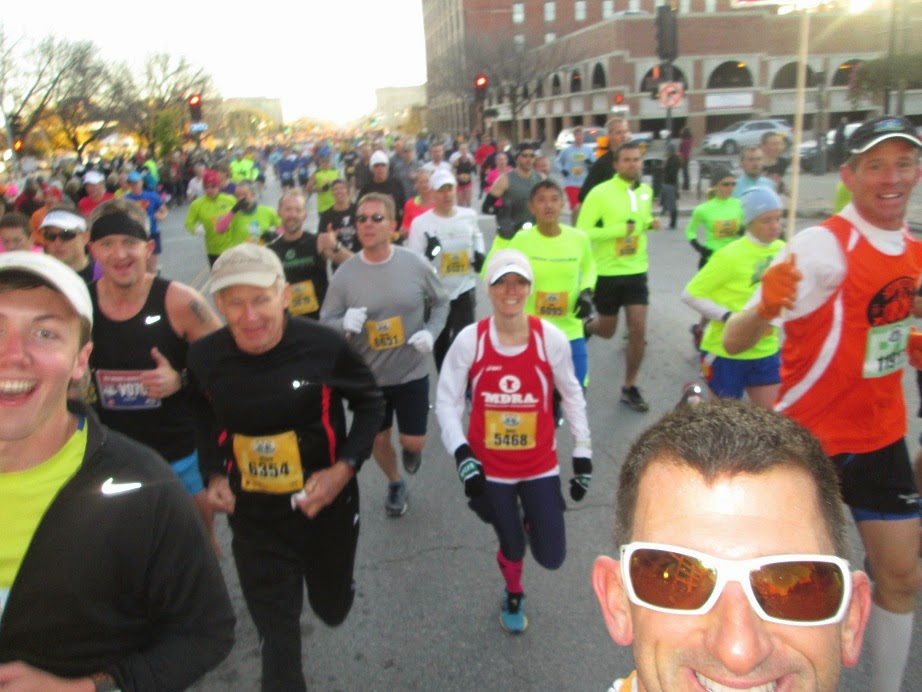 Chill temperatures (hovering around 40 degrees) with just a touch of wind and bright sunshine greeted us runners as we milled around near the start.  I was actually co-pacing this run with a chap named Brian who has done multiple pacing efforts himself.  A tall fella of around 6'4'' Brian joked our pacees were lucky to have such large windblocks to be leading them.

As the race started,  it was exceedingly difficult to not run way faster than the planned 7:38 pace but the thick crowds in the beginning kept me in check.  Brian was a bit of a cheerleader, rousing both spectators and runners.  I chose to play the quieter foil, mainly there as his guest and the pied piper of others.  More than a few runners were taking part of the I-35 challenge.  this feat had runners competing in either the marathon or half in Kansas City down the road the day before and then duplicating that feat here in Des Moines. M y goal for the day was to help as many of these tired legs to get through the course as possible.

The Des Moines Marathon has a few hills in it that I recall from running it in 2006 as part of my 52 Marathon journey.  The half marathon, however, is about as flat as one can get running a city marathon that branches ut into a couple of different park areas. When we split from the marathoners right before the third mile, I told the runners to not smile too broadly as we watched them climb a big hill we did not have to mount. 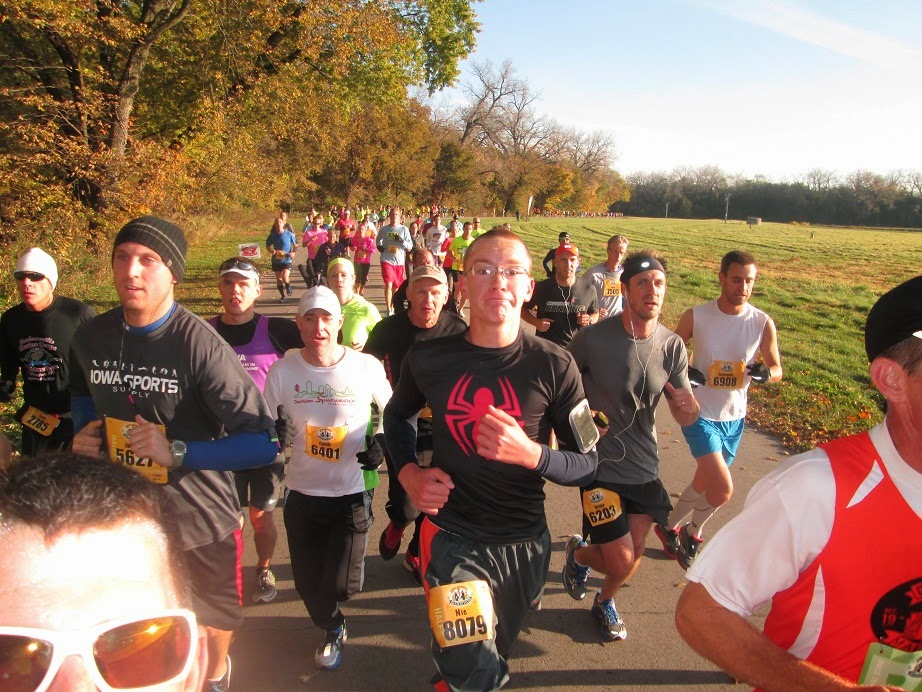 After winding along an underpass we headed into Waterworks Park. This section had a 1.5 mile loop that split runners before allowing each other to pass within inches of one another on the way in/out.  It is the only "tight" portion of the course and at this pace definitely had more than a few people coming and going.  On our way out we marveled at the speed of the leaders (who would take it home in 1:08) and then were happy to see so many people behind us as we followed suit.

Not necessarily an easy place to get to for spectators, many were out here to cheer runners on, something which is always appreciated.  It was also a section where I could feel our large group of 30 or more might be beginning t fall off the pace.  With about half the race to go I was hoping we would keep as many as possible just a few miles longer.

Our exit from Waterworks Park spit us out across Fleur Drive and then around a loop of Grays Lake Park. One of my favorite part of any race is the walking bridge you cross here.  With colors glass reflecting the sunlight (or if it is at night, using the lights of the bridge) a rainbow effect is thrown at your feet. I like to use this portion to remind me that I have just about three miles left in the race. I told the runners the same thing and then told them a slightly off-color joke.  The laugh told me they forgot about their run if only for a few seconds.

The rest of the race is quite simple with a shot down a city street with a view of the capitol building's dome you saw at mile two in the background in front of you.  This also contains a short out and back that I have always disliked as it comes right before the 12th mile.  It is not horrible but it seems like it could easily be removed by adding distance elsewhere.

When we hit that 12th mile we saw we were just a few seconds ahead of the pace for the group.  However, the pack of about ten runners we still had right on our heels was itching to be done.  We told them that we were going to let them take off so we could maintain our projected pace. Having paced on numerous occasions. I know this happens often. Runners will get so excited t be done that they wish to d so as quickly as possible. There is no longer any pacing or holding back. The barn can be smelled and they want to eat its hay.

Brian and I kept the course, hoping to both pick up some last minute runners who might be flagging a bit and also to stay just ahead of those who were using us as a homing beacon.  They might not get under 1:40 but we knew they would be getting times they were shooting for nonetheless.

When I crossed the line in 1:39:43, I was a few seconds ahead of where I would be ideally but was happy to have helped so many get their finish time. More than a few came up to Brian and I and thanked us. I turned to them and thanked them for allowing us to share this moment with them. I handed my 1:40 pacing sign to Justin, one of the I-35 challenge runners. I do hope he puts it in special place to signify his effort well-earned.

I packed up my bags and headed to the airport. Time to get home and watch The Walking Dead and get ready for a very interesting race in Oregon just a few days later.