Outside the Ice Half Marathon Recap

I had originally scheduled a 10k race put on by part of my track club in SLC for this Saturday months ago. However, as plans changed, I realized that I needed a longer run for my training much more than I needed to test whatever speed I do not have right now in a short race. Almost assured of a less than stellar time in the 10k simply because of the amount of long miles I have put in while preparing for a 100 miler in March and eventually my 350 mile run in April, I ended up running the Outside the Ice Half Marathon in Kearns. Site of my 4 hour run on New Year's Eve, the course was quite simple: 47.75 laps of a 442 meter track. The only question which remained was how fast was I going to run.

I only knew about the race because I was hanging out with my friend Chris a few days before catching up on some man time.  Chris then told me he was doing the aforementioned half-marathon and an idea popped up.  I asked him if he thought he had a new half PR attempt in him. He thought about it and realized he would be running a 5k the night before.  He said he would let me know on Saturday morning.


When race morning came about, I was not feeling too spry.  Running 13.1 miles would give me over 75 miles for the week after a 90+mile week 7 days prior. However, when Chris bounced in and said "Let's go for that PR!" I perked right up.


It was a simple format for us. Forty-seven and a third laps where we needed to average a 2:04 per lap in order to get  a new personal best for him. With a 1:39:16 PR, Chris has a much faster time in him.  He mostly does triathlons so has a much more balanced training approach, even possible leaning toward biking more than anything. Bang went the gun and away we went. 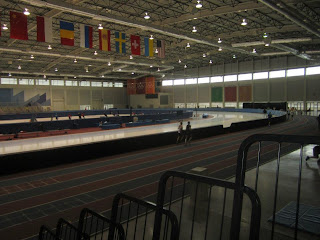 With the first 3 miles gone, right on pace, I had a feeling that Chris was going to set a new PR easily. When I say "easily" I do not mean without effort but rather it would not be one set by a few seconds. Half of my time running was spent slowing Chris down and keeping him on pace.  He was revving his engine and wanting to run.  But I refused to let him go too fast in just the first three miles.


As we approached the halfway point only a few guys were in front of us.  However, we loved watching them fly by as the leader, James, was heading for a 1:16 or so.  I knew it would be difficult to do so, if only because of the bobbing and weaving necessary to navigate all the people running on the track.  Almost everyone was very conscious of runners behind them but even the most aware person can get lost in their thoughts going around a loop 50 times. 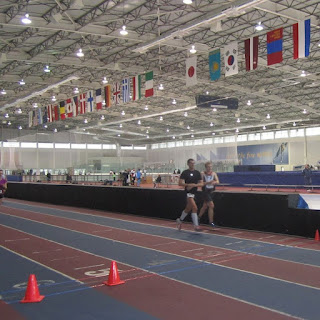 When we hit the ten mile marker, or thereabouts, I knew the PR was in the bag. Chris was even more lucid than I as I had messed up my lap counter on my watch on the second lap. Subsequently I had to keep asking hm which lap we were on. When I finally had it all figured out I hoped Chris would hold it together for the last 5k.


What I enjoyed most about the race was watching all the different types of people in all the different types of shoes doing all different types of paces. I wondered if this person was on a quest to lose weight or simple enjoyed running. I wondered if this person was simply wanting to get out of the cold (even if SLC was experiencing an extremely mild winter). I wondered why I see some of the same people at races all over but they never seem to care to actually race.  It is more like a party.  I wonder all of these things. In a race of this nature, seeing all of the runners "behind" you over and over, it gets brought into your mind more often.

With just a few laps to go I was happy to be able to help Chris chase this PR. This was when he revealed to me he had also set a PR in the 5k the previous night. I thought he might have been kidding but then I saw he was serious.  He was going to set two new PRs in about 12 hours time. 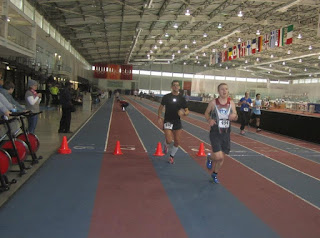 On the final lap, I told Chris we could either make it hurt a whole bunch and go under 1:38 or make it hurt just a little less than whole bunch and be over 1:38.  He hesitated for just a second which made me think that 1:38 would be just fine. Hitting a nice 1:45 for the last loop we crossed one after another in 1:38:04 and 1:38:05. Awesome stuff.  Even better, all Chris has to do is run 5 seconds faster next time and he is into a whole new minute for his PR.  But I am pretty sure the next time he tries, if rested, it will be much lower into the 1:30s.

All told it was a nice run.  Some of the timing mechanisms malfunctioned a bit, and a few people were more than a smidgen too upset about it, but most seemed to have a good time. Running around the perimeter of the ice oval, which in its center has two small rinks for ice hockey games and other ice sports, it was fun to take our mind off what we were doing and watch the spectacles inside the loop.  The 47 laps go by much faster than one thinks they will and I have never understood why some people really find this to be such a tedious way to run.  Instant feedback on your body, the ability to adjust on the fly and an aid station available ever 2 minutes or so all seem like pluses in my book.

Regardless, I got my long run in and Chris got his PR.  Nice way to start off a Saturday morning.

Nice write up about the event. I was there for the half and also the 4 hour run on New Year's Eve and enjoyed both of the races. I will be writing my write up soon about it.

Nice race, Dane. I've been running on an indoor track mostly over the past two weeks and it's soooooo boring -- except when there are basketball games to watch.

Awesome post. I can attest to the timing problems on a hi lap event. We did a 26.2 with 50 something laps, it was tough. You the MAN DANE!!