I started off my last of these recaps with the sentence: "Writing recaps for races that don't go well is not fun."  It is even less fun when they go WAY less better than planned. Alas.

This was the fourth time in as many months that I took on the Pure Austin Splash and Dash. (You can read the first, second and third installments of this race series here and here and here.) The first event was me feeling out how it was done.  The second was me racing it two days after a half-marathon and one day after a lot of international traveling. The third installment, 10 days after my most recent race, with some decent runs, a bike ride and as close to tapering as I get, felt prime for a big breakthrough. After a 26:02 and a 25:49 in the first two, I was looking to break 25 and start putting in respectable times. I didn't do it. So I formulated a plan.  My swim had not gotten how I wanted it to go so rather than rely on the fact I USED to be a good swimmer, I would actually  *gasp* train.

So for the past month I have hit the pool no less than three times a week, (mostly four) putting in around 10,000 yards a week.  Hardly Michael Phelps but assuredly the most swimming I have done in 24 years.  My last two workouts last week had me swimming some of the fastest 500 yard splits I had swam since I was 17.  I knew the race was calling for another 97 degree day but if it did that I should still be faster given my hard swim workouts. 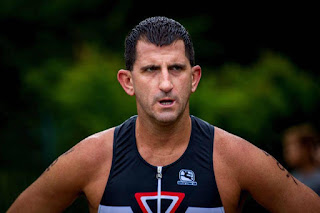 Same race prep as before as I put my towel and shoes in the same place so I could quickly get out, have the shoes on and then run up the rocky steep embankment.  Right before I hopped in the bathwater that would serve as our swim portion, my best friend Shannon showed up and surprised me with some support.  As I so often train alone, race alone, and don't have many cheering for me, this was a huge spirit uplift.  I had been dealing with a rough day professionally and it put a smile on my face.  Well, my inner face. No smiling allowed when you are being mean tough competitor guy.

I staked out a good position in the water and was happy I was not too crowded this time. I don't fear a start elbow or even worry about getting hurt. I just don't want people swimming into me. The water was the clearest it had been in all the swims I had done and that made me quite happy. Hopefully I would have a less erratic swim than I had recently. The horn went off and away we went.

I couldn't tell if I was swimming slow or fast but it felt comfortable. There is not much to say about this portion other than I was able to maintain my overall position virtually the whole way through with one guy slightly ahead of me and another to my side. For the entire 750 meters this is where we stayed. Without a doubt I swam much straighter  than I had before and that made me feel like I might have a quick time. I could tell I was roughly 12th or so out of the water which didn't help this feeling as I should have been faster. 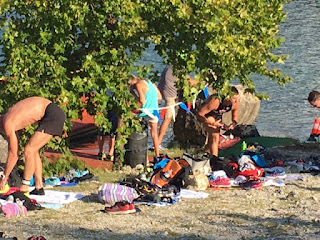 Getting out of the water I could see a slew of runners putting on their shoes.  I might have been not as fast as I hoped bu I rarely was this close to so many others as we started the run.  Perhaps it was faster than I thought.  tried to get my shoes on but as I did I noticed a rock was in my shoe.  A big one. It looked rather deliberate although I can't imagine why anyone would do that.  It only slowed me a second as I put on my visor, shoes, and ran up the hill. Shannon cheered for me and snapped a picture.

I got to the top of the hill and clicked my watch to see the swim and transition time: 12:27. I think that tied me for the fast swim time ever. That sounds good. It is not. I should have been a minute faster with all my training the past month. Bollocks. Not a good start.

After racing up the craggy hill to start the run, I had two guy in my immediate sights. However, already feeling a bit let down by the less-than-stellar swim I didn't know what I had in my legs to catch them.

I had heard in the announcements that they were going to have two aid stations on this .66 mile loop and figured I had heard wrong.  However, sure enough, under the shade of a tree were people handed out water and asking if you wanted to be splashed with water.  That's service. I declined both here.

While the two guys I was trying to catch did not seem to get any closer, I passed another man about halfway through the first loop.  I have passed this same guy on the run in other version of this race and it always surprises me. While obviously fit, he is a bit barrel-chested with no six-pack of abs (N.B. neither do I, so I am not judging) but somehow is able to absolutely crush the swim. It shows it takes all kinds of bodies to compete.

Finishing this first loop after the small but killer climb on the back half, my lungs were burning and my legs ached. I had to have crushed this run and traversed the loop in the fastest time ever, right?  Did I run 4:15 or even sneak under 4:10?  Nope. 4:41. 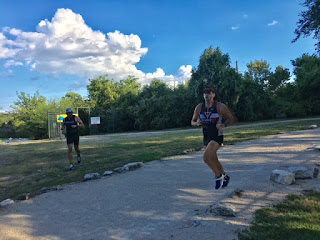 I cursed out loud. The race ended right there for me. I knew the remaining laps would be just me running out the string as this was not my day. I got passed on the next lop by one guy and ran a 4:46. The next loop I passed another guy and ran a 4:38 loop.  This would make the run my slowest of all four aquathlons by over a minute and the overall time the slowest of all four I have done as well. Don't get me wrong: I was putting everything I had into those loops. There was just nothing there.

Finishing in a time of 26:33 or close to two minutes slower than I thought I would left me with a lot of questions. Yes, I bettered my position from last month, taking 13th overall.  I also was fortunate enough to win the Masters division for the fourth straight time. But placement awards are all about who shows up. A luck of the draw, so to speak.  I do not mean to put them down but they are not nearly as indicative of your effort as the clock.

So, now it is back to the drawing board.  Was it a bad day? Was it the weather? Was it, well, what?! The good thing about races is that there is always another one to go run and see what happens.

Back to the experiment.