In the week following my 100 mile finish at Graveyard, I barely ran.  I did one short little 2-miler and then another softly trotted 5 miler with the club members of the Salt Lake City Track club. I then boarded a plane to Atlanta to take part in the festivities of the Georgia Marathon weekend for the third straight year. I had zero intention of taking part in any of the races for the weekend. At a reception after the first day of the expo for those involved with putting the race together, the idea was jokingly proposed that I "Beat the Bear" in the 5k the next morning.

What does that mean, you might ask? Well, Karhu, the shoe company which sponsored, the race has a mascot of a bear. In the 5K race, a local fast runner is given quite the unenviable task of running the 5k dressed in a sweat-inducing bear suit and gigantic bear head. If you are skilled enough to beat him, you win a pair of Karhu shoes. Hence, the joke that I should Beat the Bear. 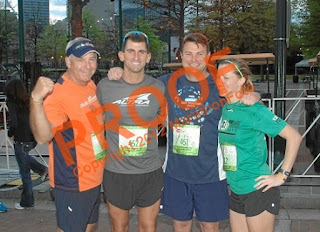 Well, then the joke became more of a reality, in spite of my persistence that I was in fact quite sore from running 100 miles in 21 hours five days previously. “But the guy wears a bear suit!” was the reply. Soon, like a teen at a party I succumbed to the peer pressure and found myself with a bib number for the Luckie’s 5K the next morning.

I stood on the starting line of the race, in relatively warm temperatures, happy as heck I was just running 3.1 miles.  Then I realized that barring a 5k at the end of a sprint triathlon last year, the last time I ran a 5k in a race alone was over three years ago. I don’t run 5ks for many reasons - two of those being they hurt like heck and I am not too good at them. What the heck was I doing running this one?

I literally had no idea what to expect out of my legs.  Was this going to take me 19 minutes or was it going to take me 25 minutes?  Could I even get my legs moving fast enough to be in contention for beating that damn bear? Or would this particularly hilly 5k course tear me to shreds? The next 3.1 miles would give me my answer. 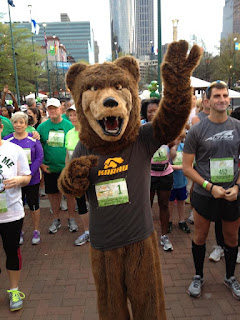 Right out of the block I had to remind myself this was a fast race.  Even when I hadn’t run an ultra a week prior, it was hard for me to remind my legs that it was OK to hurt this bad as the pain would be over shortly. After the first tiny uphill, we were presented with a nice sloping downhill and I felt pretty darn good. Surprisingly good. But when that  downhill ended, so did the good feeling. The second we started our first real climb my entire body made the sound the Millennium Falcon did when Chewbacca did not properly fix the hyper drive.

The Bear ran right passed me.

Fortunately, after falling downwind of the Bear, the course straightened just a touch with another downhill to boot. My legs resisted any attempt to go full force down the hill but at least I was able to pass the Bear again. Meanwhile, way up ahead, a tiny little boy of 15, Jaison was crushing the course.  Only on the longest of straightaways could I even see his skinny little frame, cruising down the street. But then another hill would get in the way and I would lose sight of him.  How can there be so many hills in three miles?!

With just one measly mile to go I was doing everything I could to hold on.  My pipe dream for this 5k was to break 19 minutes and after the first two miles I somehow, against any logic, had a chance. It all depended on how much I faded and on how bad the remaining hills were. Well, evidently I faded too much and the hills were too bad because my last mile went by way too slow. It did feel like the course might have run a little long and in a marathon that doesn’t mean all that much.  But in 5k when you are hanging on for dear life it makes all the difference in the world.

Even after one runner sprinted passed me I think mistakenly thinking the race was over where it wasn’t and then promptly fell behind me again, I continued on my pace. Crossing the finish line in a time of 19:27, good enough for 8th overall, only one thing mattered.

The Bear was behind me. 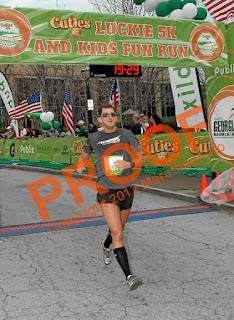 I can tell you for sure I do not wish to ever be that Bear.  I met the runner underneath, a 2:31 Marathoner, and when he took the suit off after just 3 miles of running, he looked like he was fresh from the ocean. Fantastic work, Bill! Also kudos to young Jaison who finished fourth overall.

While this concluded my racing activities for the weekend, it did not conclude the fun. I got to spend the remainder of the day at the Georgia expo, being inspired by runners and hopefully inspiring a few along the way. I had more than a handful of friends competing in the marathon and half-marathon. A particularly and uncharacteristically warm and sticky March day in Atlanta had many pushing their own boundaries.  Some more than surprised themselves with their efforts and left me in awe.  I would have melted in this type of weather and many of them stepped up their game.

During my speech, I had been asked if I thought my goal for the 100 miler the week before had been to high.  I said if I try to reach something I know I can reach it isn’t a goal but an inevitability. Goals are meant to be hard to attain, otherwise there is no point in having them.

I think many on this day felt the same way.
Posted by Dane at 10:54 AM