I have no complaints about this marathon, primarily because it delivered on its promises.  It said it would be a free race, with possibly 5 aid stations, open to all traffic and marked occasionally with flour. Very, very little frills. I have come to the conclusion over the past few years of running many similar races that I like frills. Not many of them, but like seven. Seven or eight frills.

The explosion of marathons in this country and the number of runners completing them has turned many to calling basically anything they can into a "marathon."  Pursuits of Guinness World Records and other stat-worthy accolades have created a backlash against races which actually perform, well, like a race. It is absolutely fantastic that we have as many people running as much as we can.  But many have lost the idea of what a "race" is.  A run is fantastic.  A race is something entirely different. 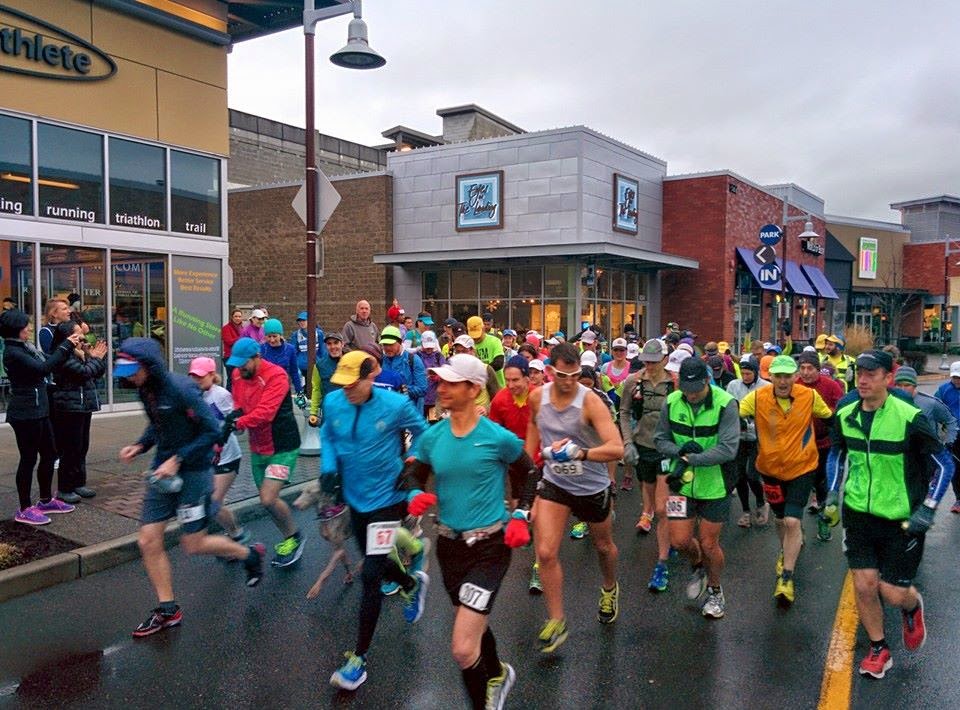 I wanted to close out one of my worst running years in many years with one last long-distance run.  I can, at times, lack desire to go on long training runs but I rarely tire of doing so in a race. When I spent the better portion of 20 miles of this race running virtually alone or actually alone, I came to the realization that I have spent a great deal of my races recently doing just that sort of running. I am alone, out in front or somewhere away from groups of runners.  I may occasionally see an aid station or a random spectator.  But for the most part, these "races" I have been running are in fact the long, solo training runs I think I run poorly.

The race was definitely hillier than I expected, especially for a race which is looping a lake, often on a bike path. Then I remembered how much I dislike racing on bike paths. Twisting and turning, constantly going up and over little hills, they always throw my rhythm off.  I spent the first six miles or so running by myself until a nice fella named Sean caught up to me.  We spent a few miles navigating the city streets and searching for flour.  Fortunately the lead cyclist caught us at one turn we probably would have missed without the assistance.

After a downhill allowed me to pull away from Sean (I told him he would catch me on the upcoming flat portions -which he did) we entered Seward Park.  With a 9 a.m. start time, by this time it was after 10:00 and the park was rather full of walkers. Dodging them, I tried to hop into a portapotty which was occupied. Natch.  I finally found a place to relieve myself and Sean and Matt, a runner who had joined us, pulled in front.  Over the next four miles we more or less ran as a little group, approaching four sets of steps (58 in total) which would take us across the I-90 bridge onto Mercer Island in Lake Washington. 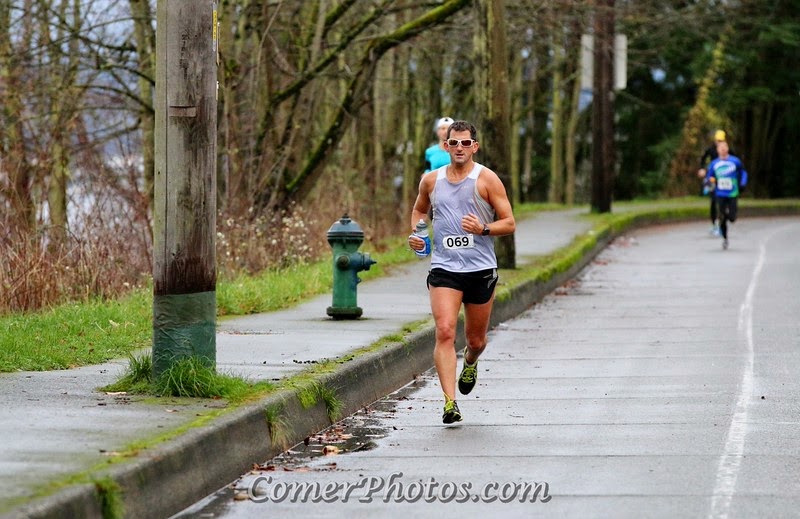 I have not run more than 13.1 miles in three months and as we approached the 14th mile, I was beginning to feel a little weary.  I packed off on these stairs and as we ran the next miles or so out in the wind on the lake, I stayed about 20 yards behind the two guys in front of me. Hitting Mercer Island and going up a long uphill I found I needed to go to the bathroom again.  I quickly did that and now found I could not see the runners in front of me.

Suffice it to say I got lost.  I did not see some of the markings telling me where to go and while I knew the general area in which to run (that is the only thing that allowed me to figure out I needed to backtrack), I did not know at first where to actually go.  By the time I was back on the trail a good five minutes had passed. I can say I spent the remainder of the race ever-vigilant and hopeful this would not happen again.

I would be remiss to not mention the wonderful aid stations staffed completely by people just kind enough to sit outside for us.  The weather called for constant rain throughout the race but nary a drop fell. Weather-wise it was darn-near perfect.  Honestly, I swear half of the myth of rainy Pacific Northwest is perpetuated by those wanting others not to move here.

When I turned south about mile 20 I knew I just had to keep following the bike path and I would be fine.  Of course, the bike path ends and then you have to continue on a series of actual roads and driveways and other things which are easy if you know where you are going. If you are tired and already made one energy-sapping wrong turn, they really needle you. Fortunately my sense of direction more or less kept me heading the right way. (I am fairly certain I took a long-cut through the wrong area at one point.) 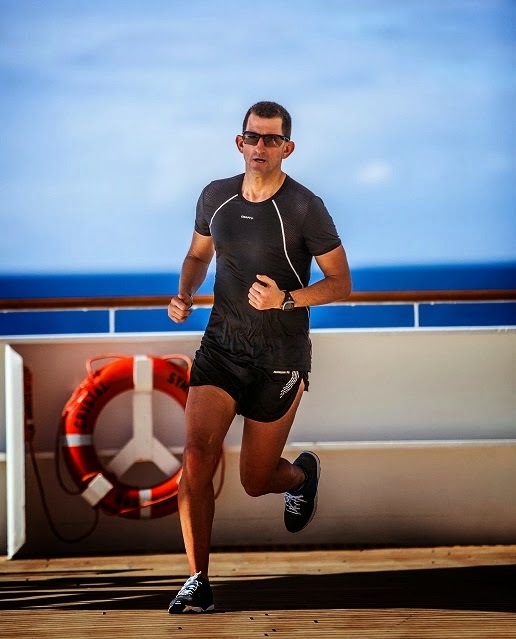 Near the finish, I knew I was not going to get anything close to what I had hoped for on the day but was happy to be done.  I ended up where we started at the Balanced Athlete store 3:19:47 after I started, taking 6th place overall. (Seventh if you count the dog which beat me, too.) My 152nd marathon was really no more a marathon than the one I do not count in which I ran around a cruise ship in January but with a course, aid stations and other runners completing it, I guess it meet the base criteria.  I have now completed 100 more marathons in my life than I did in just 2006.  Not too shabby for a guy who assumed one would be more than enough and waited two years betwixt first and second finishes.

With this year in the rear view mirror my goal for 2015 is very simple - to get much faster at every distance from the marathon on down. I will be putting in the effort necessary to do so and hope good luck and fortune shine on my efforts. No illnesses or freak injuries or accidents would be simply stellar.

But as we all know, racing, like life, rarely goes according to plan.  We just have to run it.

I've realized that I don't need frills in my races. I carry pretty much everything I need on me. BUT I really don't like going to a race and having it end up being a solo long run. I like getting faster but don't need to go to a race to run alone.