As a fella obsessed with numbers, the Cowtown Marathon presented a milestone for me.  As my 128th lifetime marathon, this race signified that I would have finally run as many marathons post-Fiddy2 as I had when I finished that excursion.  With 12 marathons prior to the 52 Marathons, I had 64 done by the end of 2006.  If I was able to stumble across the finish line at the Will Rogers Memorial Center, I would have done 64 more since then.
My average for those first 64 marathons? 3:22:08 (This includes a 5:17 marathon at Leadville.)
My average for the next 63? 3:14:10 (This too includes a Leadville marathon as well as a Pikes Peak Marathon and a stumbling-forward-with-food-poisoning-marathon in China in 2007.)
What does this all mean?  Doesn’t really matter, actually.  I just like numbers. Which is why I had my eye on this particular race for quite some time. Two years ago I had been at the Cowtown Marathon but had not run it as the next day I was taking part in my first USATF Championship race (a 50k which I had one of the better races of my life and took 10th overall.) I was so impressed with what I saw at Cowtown that I came back last year and actually ran it as one of my final tune-up races before my solo 202 miler.  This year, with a brand new course and lots of changes installed I was happy to be back again.  Given there is an ultra option always available chances are good I will be back again next year taking part in that.  But I had to get through this race first.
As is almost a 100% guarantee in the days prior to the race, I spoke to many runners who were either running their first race or nervous or both.  Many assume I no longer have butterflies in my stomach given the number of races under my shoes.  Nothing could be further from the truth. I may not get nervous about that which I do not know any more but there is plenty I know which gives me quite a fair amount of pause. One of the things I do know is how poorly my body adapts to humidity and unfortunately, race morning called for heaping amounts of that.
First 10K: 6:30, 6:47, 6:54, 6:43, 6:50, 6:51
At the start of the race, I ran into my friend John Anders, one heck of a runner, who celebrated his 46th birthday the day prior.  John routinely runs stellar marathon times seemingly only as training runners for the 17 lifetime Ironmans he has done. I had last seen John at the Mississippi Blues Marathon in January where he was running that race and then the First Light Marathon the next day (a double I had done for the first time just last year.)  Having been lucky enough to best him in the Blues Marathon, I pulled our head-to-head match-ups to 3-2 (in his favor). This race today could either tie it or have John begin to once again put distance in between us.
When the gun fired, I, as always, wondered how certain people got into the number corrals and why oh why oh why someone would want to get passed by enormous amounts of people by lining up in the incorrect corral.  John was curious about the same thing but we did not have time to discuss it as we were separated trying to weave our way through the masses.  I guess we could have elbowed our way to the front but I guess we both felt this was not an “A” race for us so there did not need to be any rush to be directly on the line.
As we headed down the first mile I felt a rock in my shoe. I tried to shake it out but to no avail. So before even the first mile was over I had to pull out and take the shoe off.  Even with this pause, my first mile was far too fast.  It was actually surprising since I felt so poorly. I had a thought in my mind prior to the race that perhaps I could knock out a 2:57. However a few miles in I could tell I simply did not have it in me on this day. I decided that perhaps a sub-3 would have to suffice. 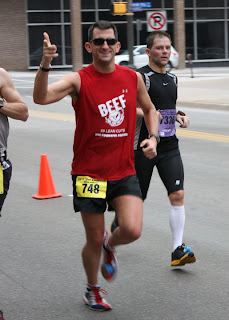 Around mile 3 as I settled into a groove John appeared by my side.  We began talking and running and trying to simply enjoy the day.  John mentioned how it was pretty ridiculously humid right as we passed a cemetery. I was about to make a quip about how I already did not feel so great until a spectator beat me to it.  “CEMETERY AHEAD. LOOK ALIVE!” the sign in their hand read. We both got a chuckle out of that.
At mile 4 I couldn’t believe I had to but the days humidity necessitated that I pull my singlet off my body, twist it up and wring out sweat like it was a dishtowel.  John was aghast.  I told him he was my witness if anyone ever doubted how much I sweat and how little shot I have of finishing a race when it gets hot and humid.  He told me how would have to get the next wring on the flipcam he was carrying. I told him we did not wish to gross out his viewers.
About a mile later I was struck with the desire to use the bathroom so ferociously that I had to pull over and duck behind a fence.  These bathroom breaks are always annoying but on a day when you know you are already going to struggle a bit to the finish they add a little more pain.  Still ahead of sub-3 hour pace, when I popped out of the bushes I almost ran smack dab into a horde of runners.  Some were obviously shooting for sub-3 in the marathon but most were part of a huge pack of sub-1:30 half marathoners. I quickly pulled away from them and tried, probably in too short of a distance, to catch up to John. I figured I ran the equivalent of a 6:20 mile just to make up the distance lost while stopped. At mile 6 we passed through the Fort Worth Stockyards, a historic section of Fort Worth which has been updated to contain eateries and shopping.  Lots of fans were here to cheer us on as we ran down the brick streets.  In front of us we could see that the course made a quick acute angle turn to the left before making another turn to the right. However, directly at the end of the road we were running on lay a staircase with about 30 steps.  I said that we should be allowed to decide if we wanted to cut 50 yards off of the course and instead tackle a stair workout in the middle of a race.  John smiled (I can honestly say I have never heard John, a very friendly and genial man, mutter a giggle much less a full laugh.  He is either always soft-spoken or I am simply not fun.  Or both.)
To the Half: 6:46, 6:46, 6:51, 7:11, 7:06, 7:06, 6:57
The next few miles flew by. Even though they were not particularly fast we both were surprised whenever the mile marker appeared.  I noticed my shoe was coming untied and had to pull over quickly to double-knot it again.  We knew the biggest hill of the course by far was at mile nine.  A long 1.5 mile straightaway sprawled in front of us with the Tarrant County Courthouse at the end.  An old stone building which just simply breathed Texas-style, the courthouse gave us something to focus on as we trudged up the hill. Finally getting to the top, I was a little bummed to have run out first mile over 7 minutes of the day but given the length of the hill and the fact that I had all but conceded a sub-3 hour finish was not going to happen, I wasn’t too displeased. 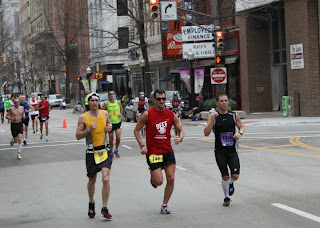 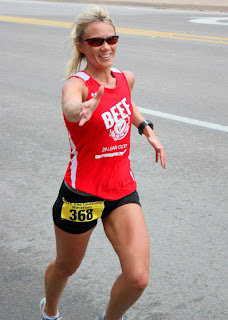 When I finished, I sat down and waited for my good friend, Shannon.  She was attempting her second double of the year.  After having to wisely pull out at mile 19 of the RnR AZ race when her body more or less shut down, she was understandably nervous about running a marathon in Myrtle Beach last weekend and then another here in fort worth.  Even more nervous? Me!  But I barely had time to walk through the extremely cordial line of volunteers who efficiently passed out a plethora of goodies (including ice cream which was just so darn wonderful) and head back to the finish area before lo and behold there she was!
Finishing 22nd overall for the women and running her fourth fastest marathon ever (just one week after her 6th) Shannon looked totally fresh as she motored by half-marathoners and marathoners alike. In fact, over the last 7.5 miles, while only one single solitary runner passed her, she passed 63 people!  I did not know if I was more shocked at how well she did or that she seemed to actually listen to my advice for once!
Still dealing with how to change her diet since a gluten intolerance has made her not process iron very well, Shannon was proud, as was I, to be part of the huge Texas Beef Running Team. At a dinner the night prior to the race we heard stories from runners of all shapes and sizes and speeds which were inspiring to say the least. This happens to be the case at almost every race I go to and it never gets old.  People who challenge themselves and refuse to let what may not be possible get in the way of what they wish to do anyway.
Kudos to everyone who ignores the impossible.
Posted by Dane at 1:52 AM

Great Run! I am glad you enjoyed our Texas Hospitality!

Great read, cowtown 2015 will be my first marathon. How bad is the mile 9 hill?