This is the 17th one of these races I have ran and written about in this particular race series. I am going to be upfront and say I am a touch disappointed that I haven't improved much more than I have to this point. When I ran the first of these I assumed soon I would be minutes faster and challenging for the overall win. However, there are a few caveats:
1. I don't swim nearly as much as I should in order to get as fast as I would like;
2. The vast majority of these have been in temperatures exceeding 90 degrees;
3. Overall win-wise probably won't ever happen as some of the top finishers here might just be kis but they have swim times even in my absolute prime I couldn't match.

As such, I can't be that bothered. Or I shouldn't be. But I still am. That's part of being a racer who wants to get faster. However, this is not a recap of complaints or excuses. This is one where I am more than pleased with my effort.

Swim:
I swam a few times in preparation for this race but not as much as I would like. A local pool that was supposed to be done in late May is STILL not completed. As soon as it is, I plan to be there a minimum of four times a week and really hope to take down my time on the weakest portion of this event for me. I know I can drop another 30 seconds in the run relatively easily, but this swim is where I could lose at least a minute, if not more, if I actually put the time in the water that it requires.

As I have described before the swim is a clockwise pentagonal shape around five major buoys that is usually rather pleasant. Today was warm as our summer is in full swing down here but as Austin hasn't had the repeated 105 degree days, it was at least mildly better than it could have been.  Sometimes it is just a pure soup of warm water. A nice breeze filtered in over the water as well which was unexpected and welcome.

After the horn sounded, I found myself right on the tail of a swimmer I didn't recognize. In fact, all the normal athletes who are around me weren't to be found. I didn't feel like I was doing too well but I also didn't think it was that bad. Open water swimming is difficult in my mind mostly because of the lack of ways in which to tell how hard you are working. Today was no different.

With the swimmer I was near, I found he wasn't doing that great of a job of swimming straight and as I was already on the outermost portion of the water I could be without going out of bounds, I was a bit boxed in.  I was trying to get around him but he was just fast enough to make this difficult.  However ,I knew in a little while I would have the inside as we made a hard right hand turn and from there I could make a move. I waited until we passed the third buoy and then picked up the pace. I soon had this swimmer behind me and was tracking down another. As we raced directly into the sun, making sighting pretty hard, I used the bubbles from his kicks to guide me. I felt relaxed and smooth but not like I was going too fast. I couldn't tell if today was going to be good or great. I knew it wasn't bad. Or at least I hoped so!

Heading for home, I got a nice straight line, must straighter than usual. I ran up the hill and towards the start of the three laps of running. I didn't have a watch on this time but I knew that wouldn't be a problem as they have a clock to read. Unfortunately, after putting on my shoes and heading for the run I could see the clock wasn't working. Now I had no idea how fast I had gone. Drats. Finding out later I had a swim and transition time of 12:06, my second fastest ever, was beyond surprising.

As I mentioned, none of the normal people I compete against were here and with no watch and no working clock, I had no clue as to how my time was going to be on each lap. So today was going to just be about position overall.

A bit ahead of me was a runner who had a touch of grey in his temples. I knew that chances were high he was a Masters runner and therefore in my division. I was not going to let him beat me if I could help it. Before half of a lap was over, I was in his back pocket. I passed him before the hill I hate and pushed hard on that small rise. I wanted to make sure to leave him behind and not give him a chance to use me to draft. Into the teeth of the hill and sun I accelerated, looking forward to respite given by the shade and ever so slight downhill which ends each lap. Getting there, I looked ahead and saw absolutely no one in front of me to chase down. I had nothing to help push me but fear of getting caught from behind. As I came to end the first loop, I saw the clock still wasn't working. Bollocks. It was clear I would have no indication of what my efforts were producing today. However, I ran a 4:23 which is actually faster than last month. Too bad I didn't know this.

The second lap now had me with more people on the course as a woman or two had entered the fray after their 3-minute delay in the water and some other guys were in front of me as well. The problem is, it is a little hard to tell if these are fast swimmers who can't run worth a damn or just decent swimmers who are decent runners. The best bet is to pass them all and worry about it at the end.

On the hill I fumbled with a glass of water which cost me a second. I didn't feel too hot which was a surprise. Just tired. And not knowing if the tired was because I was moving fast and could press more or tired and this was my limit was playing with my head. Damn watch and clock not working! I did run a 4:28 which was one second slower than last month. Again, that info would have been nice to know. 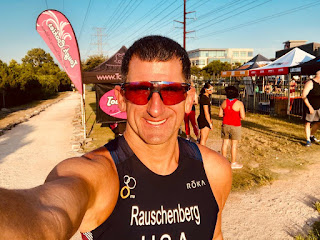 Onto the final lap I went and I didn't have much gas left. I was really just wanting to be done and with more athletes on the course (and others who are working out and really could wait just like 30 minutes for those us racing to have room on this narrow dirt and root path) it was hard to really get moving. But one man appeared in front of me and while I knew he was not in front of me in race position, I raced him like he was.

I had a sneaking feeling that maybe I had a great swim and that some of the swimmers I normally come out of the water with but then battle on the run might be sneaking up on me. But I looked behind me with about 90 seconds of running to go and saw no one of importance. Grabbed a quick glass of water and half-missed my mouth which wasn't bad thing.  Cold water on my body felt wonderful.

So if I get my butt in the pool, I might actually move up the ladder. And find an ab or two. There is no six pack there.