I'm going to be straightforward and say that these races are starting to get a little frustrating for me.

I ran this series in Austin last year five of the six times they had it. (I missed one after I was attacked by two homeless men who fractured my face and hand.) I ran a 26:02, 25:49, 26:13, 26:33, and 27:13. All of those races were hodgepodge of similar run and swim times, with one race having a slightly faster swim or a slightly faster run but barring the final race where I was coming back from the injury, more or less the same time. When I started the year this year with a 26:35 just two days after my longest run/race of the year  (a race I won) I wasn't pleased but I wasn't unhappy.

Going into this race I felt relatively rested and even though it was a warm day in Austin, just minutes before the race started, the skies clouded over. They clouded over so much that storms were seen in the distance and unfortunately for about a quarter of the women in the race which started three minutes after the men, they were pulled from the quarry for safety reasons.

I am frustrated because it seems no matter what I do or how I feel I am destined to be stuck a bit in this time frame. I will be the first to admit that I have not been swimming nearly enough to garner the times I know I am capable of doing. In addition, this race is a short distance which is just not what my body is built for.  But I should, nevertheless, be able to go faster than I have.

My swim felt strong. After the initial washing machine of arms and legs for 25 yards or so, I found myself in position from which I would not move for the entire of the swim. No one passed me and I passed no one. I had a solid straight-line swim, felt great throughout and while I did come out of the water and the transition with basically my fastest time of any of the events, it was a full minute slower than what it felt.

The run was equally disappointing as each lap felt easily 15 seconds faster than it was with times of 4:36, 4:37, and 4:33 being some of my slowest lap times ever. As far as I can tell, I got passed by two swimmers and passed one. So basically I finished the race in almost the exact same position that I started it. Not only literally in place but figuratively in frustration. 26:17 was my time.

Now as the heat of the Austin summer will be upon us soon, I need to make some decisions about what sort of racing I wish to do. If I am going to improve at these shorter distances I am going to have to commit to doing so. But the trade-off is knowing that even if I do work hard, I am just not a sprinter. Never have been, and no matter how hard I try, I am not going to find fast-twitch muscle fibers at two weeks from my 42nd birthday.

Look, I know no one has sympathy for the guy who finished in the top ten (or close to it. I think it was 12th this time.) But I was reading an article recently about memories and stories from endurance athletes like myself. Or "extreme athletes": a term I think I actually coined a decade ago when I realized "Ultraunner, triathlete, sometimes-obstacle course racer, but also dabbles in snowshoe racing, winter sports, and the occasional sprint races runner" was a bit too lengthy. The article talked about how these athletes spin their tales of wonder mixed with crushing lows and euphoric highs, painting pictures of pulling themselves from the depths. I get it. That sells books. But I abhor this type of embellishment.

I truly believe athletes of all skill levels can be just as impressed and inspired by true  and honest stories about "Man, this shit is just NOT going right for me and I don't know why." That type of story is far more relatable that the superhuman tales spun. Sure, it brings you down off your pedestal a bit and people won't romanticize how badass and amazing you are (just like holding opinions about things that matter and taking a stand against injustices are done by like .01% of people trying to catch a comet by the tail in order to garner sponsorships or paychecks) but this is how I am made. 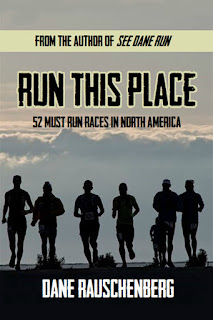 Sure it would be great if people were impressed with my feats. But what I want most is for them to read what I write, listen to my tales, and see themselves in me. Whether they are faster than me or not. So, with the that all said, the fact that my fourth book, Run This Place, is hitting bookshelves this week, I do hope if you enjoy reading what I write here for free, that you will help support forthright writing from an athlete who has done a thing or two. Get yourself an autographed copy simply by heading over here and throwing down a few quid.

And I promise to keep trying to get to the finish line faster.