After last week's run with Bill at the Brooksie Way Half-Marathon, I knew I was in for an inevitable letdown. Fortunately, being the Charity Chaser at Baltimore Marathon was the way to combat this and keep the high going. Having been fortunate enough to do the same thing at the Frederick Marathon in 2007, I knew what to expect. However, this time, with Baltimore being a larger race, I also knew I was going to be bobbing and weaving for miles and miles. I almost thought about wearing a GPS just to see how far I actually would run but decided against it.

First and foremost the Baltimore Marathon is doing everything right in becoming a great mid-sized marathon in a large town. Baltimore itself has a nice feel to it, and even though it is just 45 minutes or so from Washington DC, has a completely different vibe to it entirely. Even though I was so close to where I was staying for the weekend at my best friend's in DC, it felt like we were hours away.

Prior to the race, I had a chance to meet up with the United Way people, for whom the money I raised with my legs would be benefiting. they were very happy to have me running for them and I was more than pleased to be running for such a great cause. At the expo on the day before the race, I worked the Royal Bank of Canada (RBC) booth. I saw old friends and made new ones as we let everyone know why there would be a guy standing around near the start, not moving, when the starting gun was fired. Just in case you weren't aware, my task for the day was to be the absolute last runner to take off at the marathon. For each person that I ended up beating to the finish, RBC would make a $2 donation to the United Way. Pretty cool!

With that, knowing I would be running with purpose the next day, I hit the bed as early as I possibly could.

A beautiful day is what greeted runners and spectators on race morning. Unfortunately, as we all know, beautiful mornings often make for tough race conditions. While I knew it could be much worse, I was hoping the bright sun and the predicted high 60s temperatures would not be too detrimental.

The race gun was fired and thousands of people began to stream by. And by. And by. I stood and watched as I tried to think about the best plan of attack for passing everyone. I wanted to be as unobtrusive as possible as I passed the runners (because, it is their race too and they do not deserve to be impeded) but I assuredly did not want to run on the outside of every single turn and curve. Luckily my singlet stated "charity Chaser" and See Dane Run on the back of a very bright blue background.

As the crowd thinned, the announcer let the crowd know what I was doing and they cheered wildly. I acknowledged their enthusiasm and smiled inwardly. It is still rather difficult to realize that random people are cheering specifically for me! 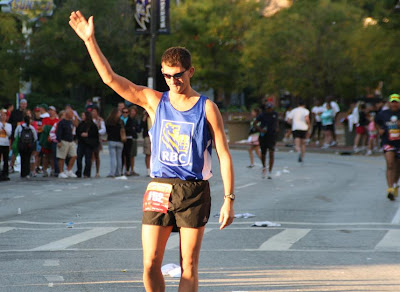 Finally a few stragglers made their way across the starting line. Soon thereafter, about 5 minutes or so after the gun went off to start the race, I took off myself.

When I had ran the Frederick Marathon Charity Chaser in 2007, the crowds had thinned by 3-4 miles. With many more runners here, I knew it was going to take longer to weave through the masses. I had been assigned a cyclist (Paul) who was radioing back information about my whereabouts to those at the finish. If I think I had it bad, this poor guy had to try and keep up with me as I jumped in and out of the sidewalk to the road and then back again. I knew my best chance to pass the biggest amount of people would be in the first 3 miles. With an uphill start, I would be able to use the elevation gain to my advantage and pass as many people as possible.

I kept missing mile markers as my eyes were on the road in front of me or runners around me (or the inadvertent elbow I took to the face from one gentlemen who then told me to watch where I was going. Both Paul and I laughed as I assured this man I most definitely had not intended to ram my face into his elbow). with an unstated goal of trying to run a sub-3 hour marathon I knew pacing was going to be crucial. However, with the extemporaneous stimulation of runners around me who I was passing with ease, it gave me the impression I was running far faster than I was. as such, missing mile markers became a problem. Soon however, I did settle into a groove but mile after mile still have hundreds of runners in front of me. I t was so neat to see the back of the packers and shout encouragement as I ran by. I looked for many friends who I knew were running the race but found it very difficult to pick people out from behind in the crowd. Luckily for me, I was easier to pick out and many of my friends shouted out to me, as did those who had simple seen the commercial on the local TV station telling all what I was doing for the United Way.

With the crowds thinning ever so slightly as I approached the 10k mark, I was happy to see I was on pace and feeling good. the sun was indeed out and it was getting warmer but much shade was providing by the buildings we ran through and the trees lining the streets. Baltimore is a pretty town!

To the Halfway Point

The city was really out to support the runners but what was even better than that were the thousands of relay runners waiting for their runner to pass the figurative baton. As runners would go through these areas, teeming bodies of nervous energy would cheer and shout for those they knew or the occasional loud-mouth guy saying "Let's Hear it! (i.e. Me).

After a trio around Ft. McHenry and the Northwest Harbor area of Baltimore, I finally caught the 3:10 pace group. Since I wanted to run 3:00 or under and had a five minute deficit, meeting this group around mile 10 or so was a good sign. Nearing the halfway point, I looked to be right on schedule and hit the half with a little to spare in the tank in a 1:28:20.

On to Lake Montebello (Mile 20)

I told Paul that after the halfway point, I begin to play tons of mind games with myself to stay focused. To me, mile 14 is huge. After the big emotions that come with passing the halfway point, I almost invariably have a slow mile 14. In order to average a 3:00 marathon, one must run an average of 6:52 per mile. When 14 was a 6:48, I was pleasantly surprised, especially when I had 80 seconds to spare. I knew the next three or four miles would really tell the tale as this is where the race began its uphill ascent once again. But a 6:59, 6:57, 6:58, 6:52, 7:00 had me feeling great. I knew that mile 20 and the loop around pleasant Lake Montebello was going to be a flat reprieve before the last up hills of the race. I figured that this flat section would be where I could bank a few seconds per mile, rest up and prepare for the final push. However, a 6:56 and then an almost unexplainable 7:04 followed as I traversed the circumference of the lake. Knowing that I had a solid hill left before a nice steady downhill had me worries a bit. I told Paul how quickly a nice little reserved can be lost as soon as you had one bad mile. I was determined to not have a bad mile but was unsure what would happened once I left the lake.

Almost immediately we began a climb through a mercifully tree-lined section. I happened to look down at my royal blue RBS singlet and notice it was completely caked it white salt. Crap. The sun had snuck up on me and was depleting me without me even knowing it. I pushed hard to the next aid station to take in some fluid asap. Two full glasses of water, one glass of Gatorade and a surprisingly fast (for an uphill) 7:04 mile had me feeling good. The slight downhill miles began and I was hoping I was ready for them. However, try as I might I could not get the legs to turnover. Even on a (mostly downhill grade) all I could muster was a 7:08 and 7:14 for the next two miles.

Paul radioed ahead and told them I was going to be pretty close to sub-3. I think this helped me pull a 7:02 mile out of what felt like a 7:30. With 2.2 miles left I was praying to hit one more downhill to roll into Camden Yards with a sub-3.

Unfortunately, I got an uphill (not much but one nonetheless) and I was sapped. I knew, if this were, say my first attempt at sub-3 and I did not mind collapsing at the finish, that I could have given everything I had and made that push. But it wasn't my first, there were no runners that were within passable distance in my sights and the sacrifice was just not worth it. I could only hurt myself (with a half marathon, a 12 hour race and a full marathon in the next 21 days) and gain nothing more for the United Way. So I settled into what the hill was going to give me, prayed my watch would surprise me but gritted my teeth when I saw a 7:45.

The last mile had me trying to do calculations in my head to see how much I was going to miss sub-3 by. One of my goals is to not repeat same minutes. I have run a 3:01 (in the first of my two Bostons marathons on the same day earlier this year) but never a 3:00. In fact, I never want to run a 3:00. It is too close to 2:59! But as I hit the last .2 with Camden yards to my right, I could not do the math quick enough in my head to realize where I would finish. And, as I drew closer I could see the camera and microphone waiting to interview me at the end. All I could picture was a sprint to the finish to break some arbitrary goal of mine and then an "Agony of Defeat"-like crash at the end. I decided to simply cruise in and accept whatever time I had.

Regardless, I finished 77th overall out of 3114 pure marathon starters. I am unsure how many marathon relay people I passed but I know about 5 teams passed me in the last mile or so. Nothing kills the ole ego faster than some fresh-legged runner sprinting past you in the final mile of a marathon. Nevertheless, by my estimate I will have passed a total of 6,000 people. As such, the United Way will get roughly $12,000 from RBC.

That should make for a nice Columbus Day present! 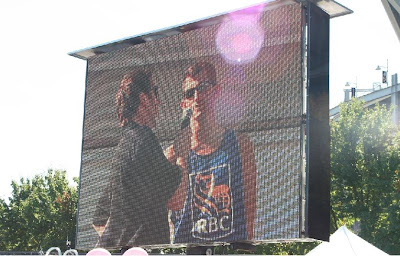 Awesome job, Dane!! I wonder if RBC was prepared to have you pass so many people! ;) Congratulations on a great race, and on raising so much money for charity. Rest up. :)

Congrats, Dane on an incredible accomplishment. I, too, wonder if RBC knew just how much $$$ you would raise - that is fantastic. Recover well for the next weekend.

I do believe you've found the only way to surge past senior citizens without being subject to scorn. Excellent!