Very few people race the Peachtree Road Race. Tens of thousands experience it.  Count me as one of the later.
In one of the most evenly egalitarian races out there, 28, 478 men finished the race and 28,693 women crossed the finish line.  Over 57,000 people and only 107.5 people in one direction kept this from being split right down the middle. 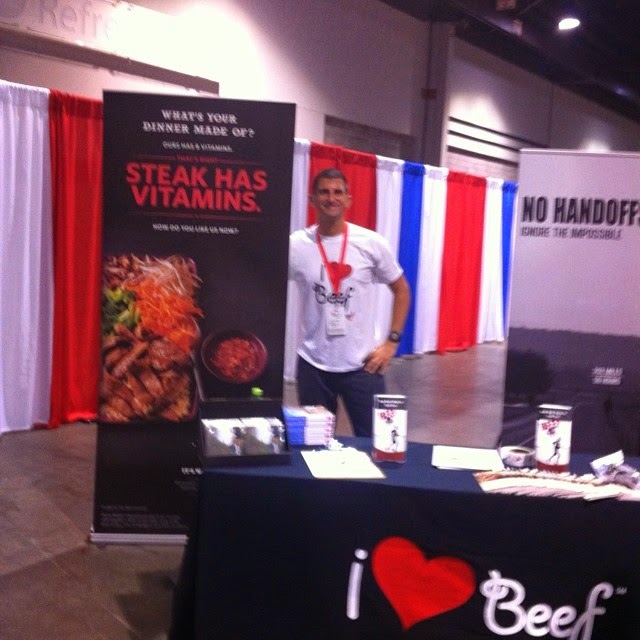 While I made my name mostly by running 52 Marathons in 52 weekends in 2006, I have always been a fan of races of all disciplines and distances. I may not be any good at all at the shorter distances races, but I do appreciate them.  I also appreciate races that do so much to incorporate the everyman runner.  Granted many races do that these days as so many “adult onset athletes” are lacing up shoes for the first time, but few races have been reaching out to the running community as a whole for as long as the Peachtree.

When the Georgia Beef Board asked me if I wished to help the promote eating lean beef and helping educate people about how healthful beef is as a protein source for all people, let alone athletes, I jumped at the chance.  As I have been working with cattle producers and those involved with the promotion of beef for four years now, it is always my pleasure to help disperse incorrect information about beef.  Most galling to me is those who love beef and almost begrudgingly admit it as those who are so vocal eating meat are so loud in spite of the small numbers they have and the facts that show most of their lamentations are without merit.

When people here that there are 29 cuts of beef that are leaner than skinless chicken thigh, the shock in their eyes is almost comical. Furthermore, learning that beef has been on my training table and also in my fueling during long distance races leaves them in a state that tells me my work is far from done. But many are not surprised and they joined me and 60,000 of our closest friends at Lenox Square on the 4th of July.

In what has to be either a record or one of the top five coolest Independence Days in Atlanta’s history, we were met with a partially cloudy 64 degree, relatively humidity-free day. Hard to ask for better weather than that in the Deep South.

One wonders what the original 110 finishers of the first Peachtree would think about this race 40 years later.  Fortunately, many of them are still around and still running and you can just ask them. Personally, with there being only so many weekends in one’s life I have never seen the allure of running one particular race numerous times, but if you find something you like, stick with it. 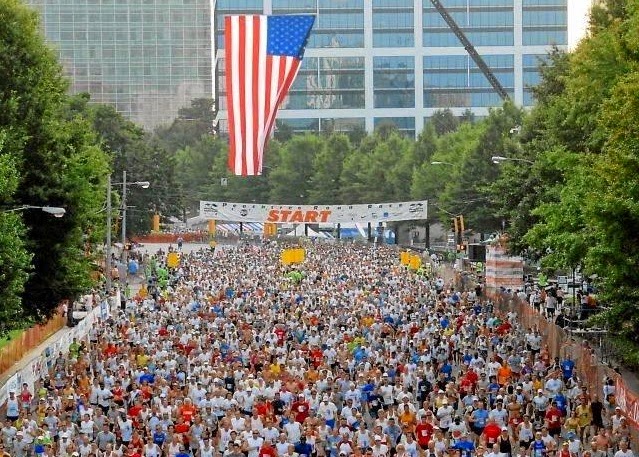 No one runs the race necessary to run a fast time. Nor is it particularly scenic course.  The crowds are nice but the participants probably out number them 10 to one in most places. What makes the race so iconic and one someone must experience? That’s a hard question.  What is it about certain races out there like the Boilermaker 15k in Utica, NY or the Bix 7 miler inDavenport, IA that take root in a seemingly odd place or time and grow exponentially.  It is usually not one factor but a combination of many which makes someone just know that they “have” to run them.  Fortunately, in the 40th running of the Peachtree I am now on the tens of thousands who have done so.

My time was pedestrian. Hitting 42:32 put me squarely in the top 1000 of the race. Saying I took it easy would be a miscategorization as I took it about as hard as I could without having to work very hard, if that makes any sense. It was my slowest 10k ever, including the few I have done at the end of Olympic Distance Triathlons. But I wasn’t here to run fast, whatever that means for me. (Heck, even my PR for this distance would barely crack the top 100 and that was run on a far more forgiving course.) I was here to take in the event, see what it was about and grasp why all these people deal with the potentially logistical nightmare of running a point-to-point race on a national holiday.

What I found was continuity. People enjoyed running this race so many times because it is the same. They know that they will run through Atlanta on the fourth of July and then go about their day.  They don’t care if it is hot (usually), humid (mostly), or hilly (always).  They want to know that as many things change in this world, this race will stay the same. Well, maybe it will get a little bigger and they a little slower.