My original plan for this marathon was to get a low-key run in near home. I figured I could possibly eke out a victory in this race, get my summer started well in that category, and then move right along with life. But then the summer of oh-so-hot-days in Portland rolled in. The month of June broke the record for the most days above 80 degrees and the most days above 90.  A week or so before the race, the forecast called for race day to be 106 degrees. What in the sam hell?

Then I went to Brazil and not once, but twice, summitted Corcovado to catch a glimpse of  Jesus. The latter of those two was on Monday. This race was on a Friday. Combine air travel and tired legs with ridiculous predicted heat and I decided this race would be a 13.1 mile effort and not a 26.2 mile death march.

The race was put on by Steve Walters, a very amiable chap who is a fixture in the Marathon Maniac circuit. It is one of many he puts on a year which follow the same basic no-frills approach. I think he does a very good job with them but, in all sincerity, I like some frills. I can run virtually by myself, carrying my own water bottle any day of the week. When I race, I want someone else to carry some of the weight. Again, this is no knock on the race and many runners enjoy them (for a variety of reasons) as they deliver mostly what they promise. They just don't promise a great deal.

Because my expectation, like the distance I was planning on running, were lowered, it barely felt like a race day. No nerves, no butterflies, just knowing I needed to Body Glide the heck out of myself in order to somehow stave off chafing as my superhuman sweat glands rid me of approximately 10 pounds of water in 13.1 miles.

The marathon and the half marathon lined up together with ~65 total runners crammed onto a tiny narrow bicycle trail. The course would be three loops for the halfers and six for the full. It was a twisty-turny, undulating course that looks neither difficult nor impressive when seen over the long run. But each loop consisted of two dead-end out and backs, oodles of turns, and super quick rises on the path. Again, I am not saying the race didn't warn me. I just need to know why I do these sort of things to myself.

When the metaphorical gun fired I shot out to the front. I figured at most a handful of people would challenge me for the win and the last thing I wanted to do was give them any head start. I was joined before long by a young redheaded lass and the timer himself, who was running the 5K. I made an educated guess the redhead was running the 5K as well. Regardless, if she wasn't, the way she took off in front of me meant I wasn't catching her either way.

Less than a half of a mile in, another runner passed me and he looked more like a half marathoner. He pulled away a bit as well and I figured I might not have much of a chance to stay up. But after two miles, and me reeling him in a bit, I passed him. Alexjandro was his name and as I caught him he remarked how he shouldn't have tried to chase down people running four times shorter of a distance. I concurred.

When we turned on the out and back portion to head home, a third runner had caught us and fell right in line. I was leading the pack with Alexjandro behind me and our newcomer, a young Kiwi named Benedict ("Beenie" I would learn later) right there as well. We finished the loop like this, in-step, all in the same time of 31:22 for 1/3 of the way done.

I was beginning to wonder if the race was going to be like this, where I led the charge and they simply followed, hoping to out kick me at the end. As I weaved from side to side on the path, cutting every possible tangent, I heard footsteps right behind me. Yep, they were going to ride my ass. 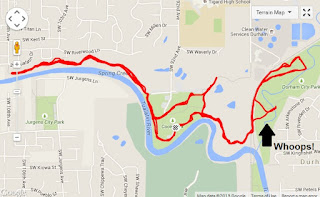 Right before the 5th mile, my eyes in blinders, I took us down a wrong path. This is absolutely no fault of the races as we later would see a comically large "NO!" drawn on the sidewalk.  But I was so concentrated on the race and they were so concentrated on following me that we all ran the wrong way. As we crossed a footbridge, I came to a sudden stop. I did my best Gandalf impression.

"I have no memory of this place."

They agreed and we turned around. It seems quite clear we added at least a quarter of a mile to our day. Bonus miles!

As we began to make up time, this little extra bit seemed to take the air out of Alexjandro's sails a bit. As Beenie and I began the final out and back before beginning the third loop, we had a full 1:20 lead on Alex.  Now the only question was how much did Beenie have in the tank.

I tested him with little spurts in some place and little areas where I would slow down. Every time he stayed right in my hip pocket. Bollocks. He might just be toying with me today. As we came into the area for the beginning of the third and final loop, I could not hold out any longer. I needed a drink. (The race was cupless in its aid stations other than this one right here so I had run 8-ish miles with nary a drink. I had sweat off enough to offset Oregon's drought. Not good.)

I grabbed the drink and slowed to let Beenie go by. I was hoping to let him do the work for this loop, at least for a little bit. However, he soon showed he, at least here, had way more in the tank than I. As we wound our way through the path, he pulled away. I tried to respond but had nothing to do so with.

The twisting nature of this path allowed for someone with a ten yard lead to seem like they were forever in front of you. Because of this I didn't realize, as we neared the halfway point of this final loop, that I had closed the gap somewhat. On the first out and back I slapped palms with him and told him good luck. After doing the out and back myself, I entered an area where I could see further ahead.I had closed the gap even more. Did I have a shot?

The hardest portion of the course was this final out and back. It was punctuated by two steep but short hills. I knew on the first lap these might be trouble for me later on. Sure enough, as I came close to this last out and back, I could see Beenie had pulled away. With no one close to pushing me from behind I lost my will to even try to hunt him down.

I finished the last mile or so and even though it felt rather slow it wasn't nearly as bad as it felt. I do know, however, there was no way that I could have run the marathon on this day. Well, I could have but it would have been an awful sight. In this final portion I also saw my bestie Shannon who had thought about running the full as well but wisely decided against it and dropped to the half like me. She shouted words of encouragement to me about looking good or something but considering I felt like death, I laughed a little inside. In fact, after the race, in speaking to Beenie, he told me he was absolutely shocked at seeing a person sweat this much. Yep, that's how I roll. 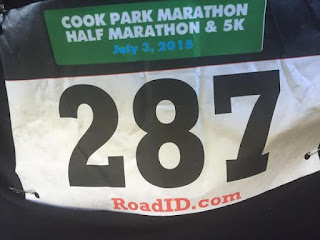 All told, the time was less than stellar but the effort was solid. I took second place behind Beenie in a time of 1:38:07. Admittingly a bit sour after giving up my first victory in a half marathon in 5 years, I decided that I would sign up for another of Steve's races on Sunday. It will be hotter, have one more loop, and looks just as twisty and turny with hills and three out and backs. I am already declaring I am an idiot.