In what can only be described as my most odd year of racing, less than two months ago I had no idea when I would actually be putting on a bib number again.

I was attacked by two men late at night in what can only be described as an odd motor vehicle/pedestrian related incident. (More here.) Thumb broken in multiple spots, requiring surgery and pins and a face fractured in three places made me wonder when I would race again.  (N.B., The police have STILL not charged either man who attacked me as of today and have made it less than easy to even move forward with this process, even though they had both men in their hands mere minutes after the attack. But I digress.)

Because of my injuries, I had already cancelled several races, including my own that I was hosting, costing me thousands of dollars in lost income. While I was able to return to running sooner than expected by many, it was a slow return and one filled with trepidation. I flew in from a personal trip at midnight on Tuesday morning and realized the final Splash and Dash series was 6 pm that night.  If I was going to have any shot whatsoever of qualifying for the World Aquathlon Championship (the qualifying race would be held October 1st here in Austin) I knew I had to get back to racing and get in the water. So to the familiar aquathlon proving grounds I went.

My racing had taken me here on four prior occasions. I missed August's race for obvious reasons but as I drove to the start of this race, with 94 degree temperatures and typical Austin humidity, I was happy that it was at least cloudy. Getting to the race starting line I saw that the normally rocky exit ramp from the water had been paved over, in anticipation of the National Championship race in 12 days. That was nice.

Sliding into the 83 degree water, I was also pleased this was a little cooler than the bathwater I had swam in back in July. I didn't expect to have a particularly good race but at least I had a few small factors better than they could be.

The gun went off and I did my best to hang to the far right in an attempt to keep anyone from hitting my hand. For the most part, I forgot all about it as I sliced through the water. All it took was a few strokes and I was more concerned about my positioning than my thumb. My swim at no point felt particularly fast but it also did not feel like I was trying too hard. Unfortunately, my sighting was a bit off for this race and some foggy goggles did not help much.  Regardless, after the initial rush of swimmers, I only had one person pass me, which I was fine with. Again, I was just happy nothing hurt.

Getting out of the water, transitioning from swim to run, went rather smoothly, even if I did doddle a bit putting on my shoes. I saw one swimmer was about to run up the hill at the same time and I simply had a feeling I would pass them on the run anyway.  So I let them go in order to give chase.

Cresting the hill,  I noticed my time was 12:35. That was just 8 seconds slower than my fastest swim/transition time of the previous four swims. What the heck?  I hadn't swam in 2 months (63 days, actually) and in the month between my third and fourth aquathlons I had really hammered some swim workouts. So here I was, getting back from a trip to the mountains, staying with a friend who had a cat (I am allergic), feeling overall out of shape (I still am about 10 pounds over what I raced at two months ago) and for all intents and purposes, I swam my fastest time of the year?  *shaking head gif*

I can tell you that during the race I didn't know this. I thought I had been in the 11 minute range previously. I can't say that it changed my overall strategy much but I do wonder if I knew what I had done if it would have spurred me forward some.  Regardless, I had three loops to run. 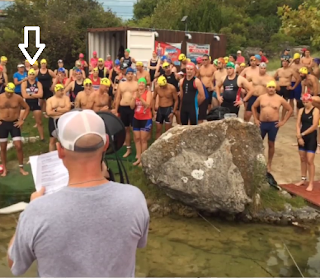 Within yards of the start I saw one young fella ahead of me who I mentioned previously.  I knew he wasn't going to stay in front of me for long. Right before the first half of the first loop was done, I passed him and gave him a "good job."  Young guy. Good swimmer. Will be interesting to see how he fares. Yet while I passed him something was amiss. I was simply exhausted. Crossing the mat for the first loop only confirmed what I already knew:  I was basically jogging.  My first loop was completed in 4:49 or three seconds slower than my previous worst loop on a day when I mailed it in. I fully expected a deluge of runners to be passing me on the second loop.

However, as I ran on, sucking wind, paying extra care to the footing on this loop (which is really rather treacherous for a race and I have no idea how they are going to have a mass start for the championship, if they do in fact start like that) I just was going through the motions. With about a minute to go on the end of this second loop, first and second place overall lapped me. That was a bit demoralizing but not surprising.  Only a surge kept me under 5 minutes for the loop (by my watch a 4:59; by the timers: 5:00.)

This final loop was me passing runners and feeling a little good about lapping people myself while also being mindful of someone else lapping me. I had virtually no energy to fight off anyone but I did see one runner up ahead. In spite of being drained, I am happy to say I could still find a competitive edge somewhere in the murky darkness of exhaustion. I stalked him until the final turn and with just .1 of a mile to go I passed him. I saw I wasn't going to break 27 minutes which bothered me greatly but I was going to hold off this guy if it was the last thing I did. Crossing the mat in 27:13, I was 11th male overall.

Now, I don't know if this guy I just chased was on my same loop (I finished, veered to the right and collapsed on the grass - 100% spent), but I do know that someone finished just five seconds behind me.  I had not seen nor heard anyone else but it easily could have been. (Later I found out it was not the guy I was chasing but a rather slow swimmer and a super fast runner who had almost racked me down.) Regardless, I valiantly tried to hold onto the Master's OA win which I had won every time I had raced previously.  Alas, some other grey-haired speedster nabbed that award from me this time and even if I had run much better than expected I could not have beaten him. (He finished 5th overall.)

So in my five aquathlons this year I had finished in 26:02; 25:49; 26:13; 26:33; 27:13. None of those are the times I thought I would run.  I truly thought I would be in the 23 range by the end of this year of racing.  With the championships in just 11 days, I can say I do not have much confidence in my repeating my 2009 world championship qualifying feat. Sure it could happen and the forecast "only" calls for a high of 87 that day. A 8:30 AM start might help a bit, too. But the main thing is I have gotten back in the water and faced my fears of what would happen with my hand.

Be in the arena, first and foremost.  You can do nothing if you don't show up.
Posted by Dane at 11:31 AM