When I decided to visit my mom for a post-Thanksgiving, pre-Christmas trip, I looked around the area to see if there was any races nearby. I found one or two within an hour's drive.  I settled on one smaller race at Slippery Rock University based solely on the fact that I had never been to its campus. As much of the United States that I have seen, I have seen so little of the surrounding area near my hometown.  Growing up I rarely traveled with any of my family.  I didn't get my first car until I was in my final year of law school. So, Slippery Rock it was.

The fact that the race started at 10:30 a.m. definitely helped my decision. 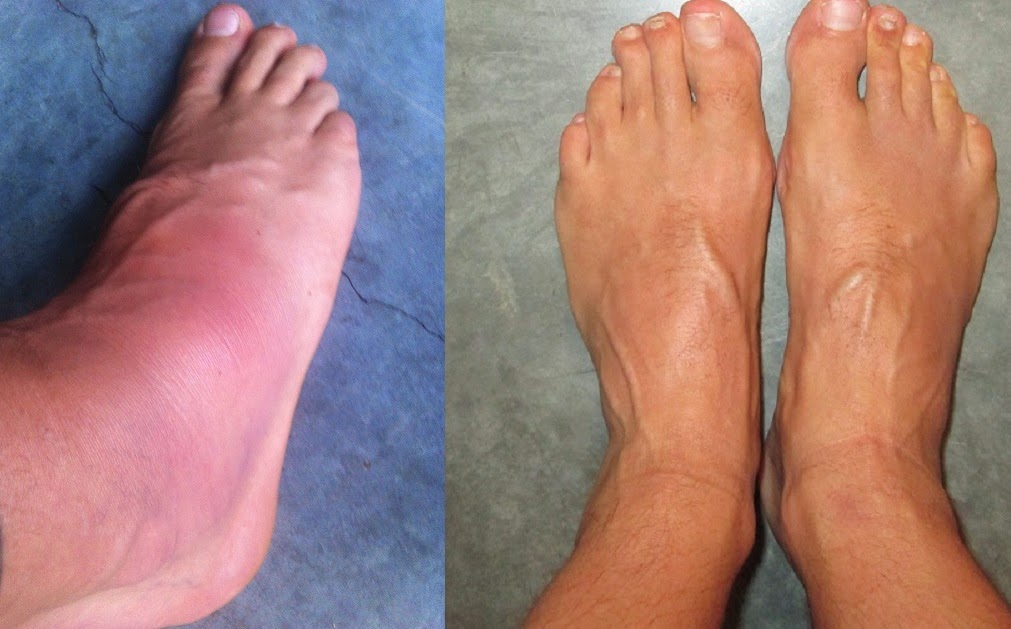 Then on Thanksgiving I got a third degree sprain of my ankle running a hilly 5k in Portland. I doubted I would be running at all, let alone racing. Fortunately, my wolverine-esque healing powers kicked in and 48 hours later I went from balloon foot to normal ugly foot. However, given the whole "I might not even run this thing" I didn't look at the course or elevation profile. Well, that would end up hurting a bit.

What was most special about this race was that it was the first time in many years anyone in my family had even seen me start a race. Always supportive but usually thousands of miles away, now they got to see me run. I was stoked. 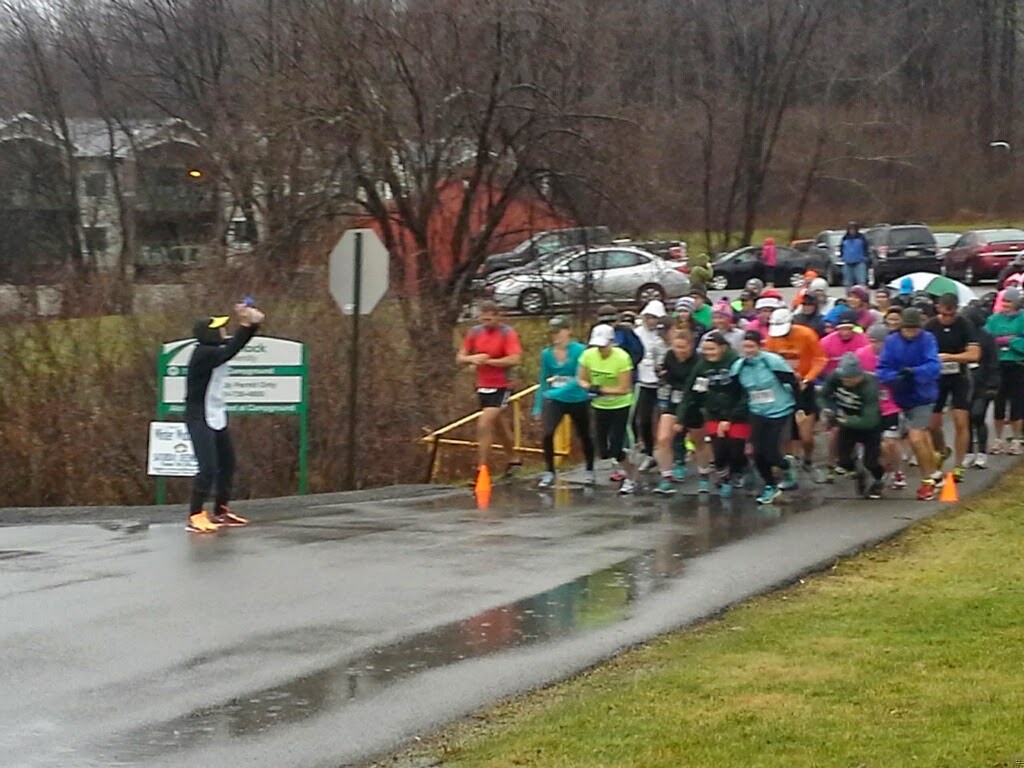 After a completely respectable wake-up, a quick trip to pick up my aunt, my other and I were on our way to Slippery Rock. The forecast called for cold temps and rain which were not exactly to my liking but what can you do.  The start of the race was near Ski Lodge on the campus and while we waited out the cold and rain, we were treated to a nice warming fire inside.  Runners gathered inside until just a few minutes before the start.  We then meandered out onto the course as chilly raindrops fell.

A penguin with a starting horn lined us up, a prayer was said and away we went.

After 20 yards of running on wet road we immediately went up a wet gravelly hill.  I was somewhere in the initial top ten of runners but wasn't too worried. My time was irrelevant as was my place. I was simply trying to make sure I didn't harm the ankle.  One young fella shot out and was chased by only one other guy.  About six of us hung together as the rain begin to come down harder.  It was chilly.

After the initial hill we flattened for a tough before a couple of sharp right hand turns. I didn't feel too uncomfortable at this pace but I wanted to push it more. We crested a small rise and I saw a nice downhill in front of us.  Use what you are good at, is what I always say.  I'm good at downhills so I sidestepped puddles, the lone female runner in front of me and a trio of guys undoubtedly half my age.  (That's just weird by the way. 19 year olds shouldn't be me divided by 2.)

I passed everyone but the two rockets who shot out of the gate and sidestepped a runner with a dog, who I couldn't tell whether he was in the race or not.  He had started out a little bit before us and ran the same course but obviously wasn't racing. Seemed odd to be out here if he wasn't.

Having drive in this way I knew we were in for a doozy of a hill.  I was not exactly looking forward to it. I wasn't happy about letting 3rd place go ahead of me either but I had to keep reminded me that a podium finish in a 5k meant absolutely nothing to my overall goals right now. So in fourth place I sat.

I could hear one of the younger fellas behind me but was more intent on trying to figure out exactly where we needed to turn and when. I was also very anxious to see the top of the damn hill.  As we finally approached it and made another 90 degree angle, I looked at my watch.  This was going much better than I could have hoped.

The man with the dog appeared to cheer the young buck behind me on as we re-entered the campus.  Tell him "it is flat or downhill the rest of the way!" was more helpful to me than it was to the other kid.  Knowing, if he wasn't lying, I had no more uphill to contend with, I began to let loose a little bit.

Some dicey turns down some ramps and around a big rock (I am guessing some sort of unofficial mascot for SRU - I will have the check) meant just a half mile or so until we could get out of this rain.  We passed through some parking lots of residential housing for the campus and up ahead was the finishing clock. 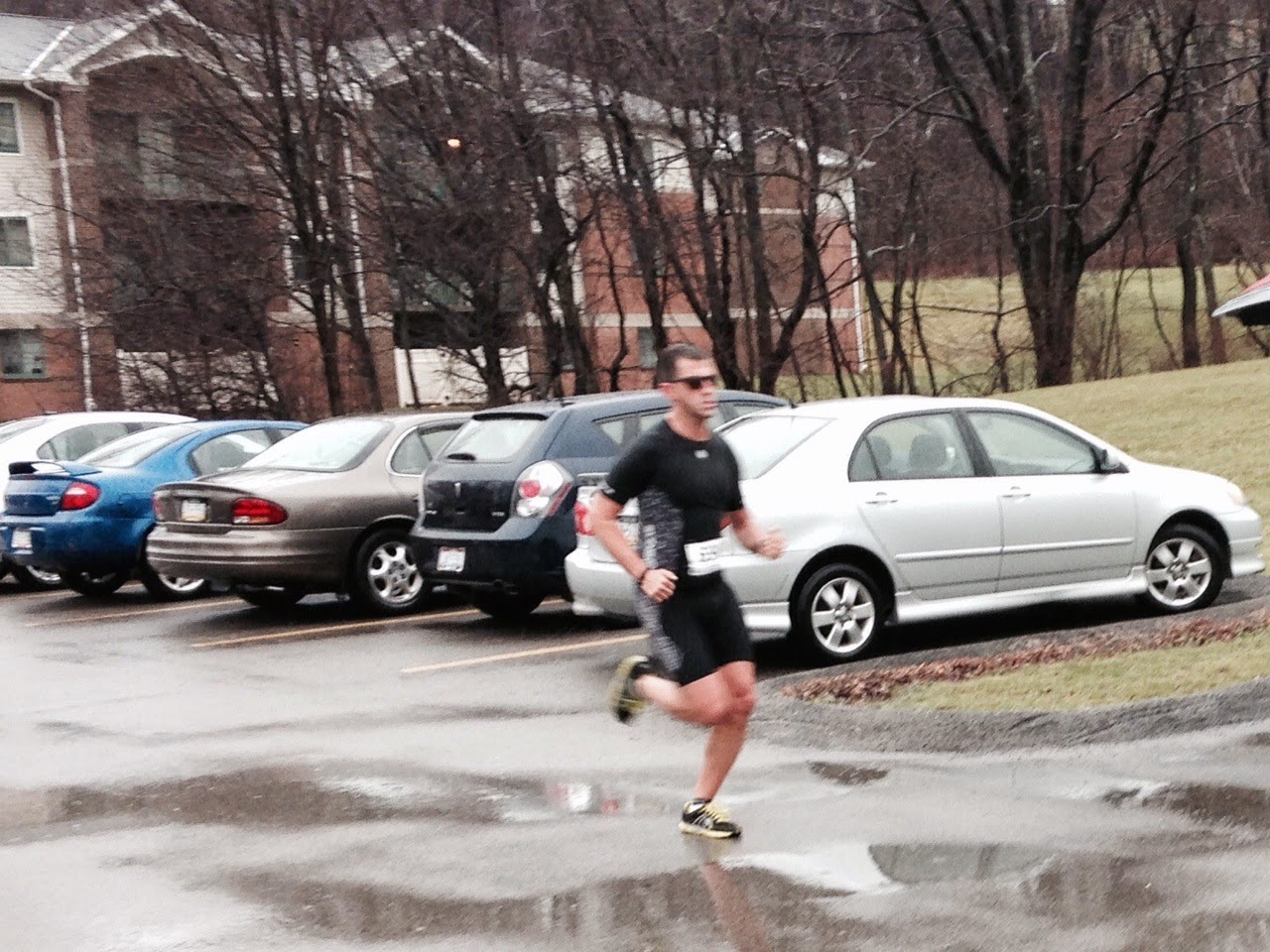 I could see my mom and my aunt as well as my half-sister who had made an hour long drive to watch me as well. It was her first time seeing me doing anything remotely athletic (outside of maybe a swim meet in high school) so it was greatly appreciated.

Seeing I could not catch 3rd place, I made absolutely sure I would not get caught by behind. One final push built me a decent cushion of time and I passed over the finish in a respectable 19:36. Given the rain, hills and newly semi-healed ankle, I was pretty pleased.

We all reconvened in the warm ski lodge and shared smores, chili and good company. I gave a brief talk and thanks to the assembled as well as signed a couple of books.  My aunt pointing out someone who looked like the younger sibling of a high school friend but my brain couldn't wrap around the fact that this large man could possibly be that young kid I knew.

As I was talking to a few students he came up and said he too was from Titusville and I might know his older brother. I was indeed shocked that the kid I probably last saw when he was 8 could possibly be a full-fledged man.  when you come back home, you expect everything to stay the same.  It rarely does and that is good. 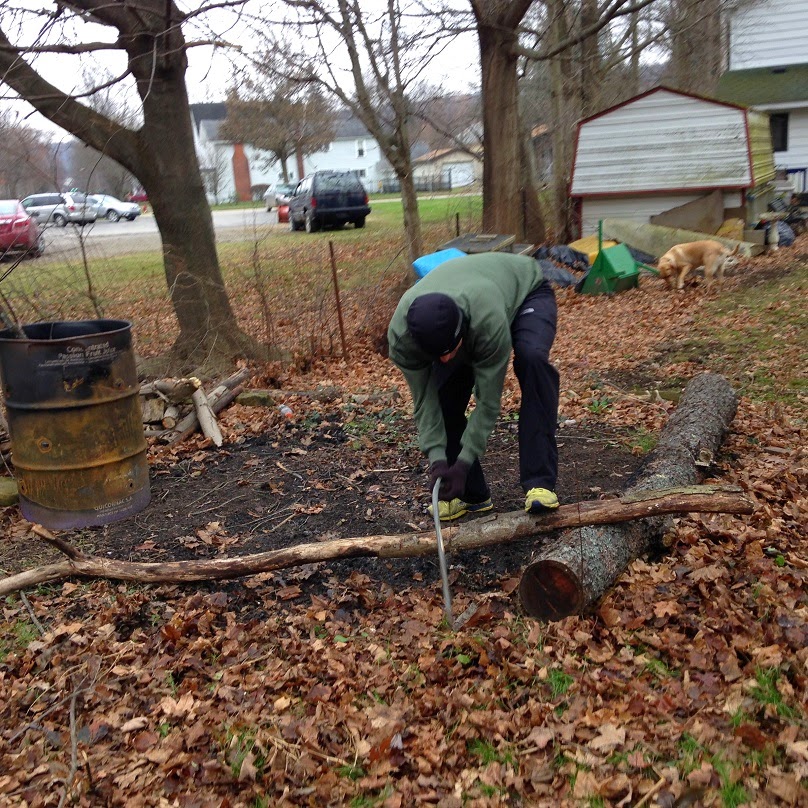 Receiving a small penguin as an age group award winner was a little consolation for getting pushed off the podium. When my mom won a door prize that dwarfed my award we could only laugh. I got to share some lunch with my family soon thereafter which consisted of some yummy steak at a local eatery.  A race, some steak and family time.  Hard to beat that.

But then it was back home to do some work around the house for my mom. I am still a son first after all. The rain stopped a bit which made things easier. And I couldn't be happier to help her out. Thanks, Mom!