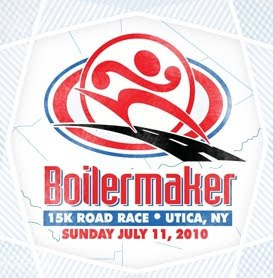 When you are just one mile into a race and you know for certain that your performance is going to be far below the level you were hoping, the best thing that can happen to you is that the rest of your weekend was enjoyable.  I was unfortunate to have the sub-par race performance but far more fortunate to experience the latter this past weekend at the Boilermaker 15k.


I continue to try and get my legs back underneath me for shorter distance races the best way that I know how which just happens to be by racing myself back into shape. One of the biggest drawbacks to trying to regain speed this way is that I have been dealing with an achy Achilles tendon for about two years now. When things are clicking right (as they were last summer when I set a new marathon PR during my 6th marathon in 5 weeks), it is super sweet.  When they aren’t, (as has been the case after I finished my 202 miler 3 months ago and have been in a mini-slump since), they are sour.  More than most runners, I simply cannot afford an injury.  So, heeding the advice I give as the best way to continue to race and make sure you do not get injured, I have to pull back when the potential for an injury rears its monstrous head.

When the Boilermaker 15k started Sunday morning, the weather was far better than it had been earlier in the week.  Not quite the “perfect day for running” the obviously ignorant-of-what-“ideal weather”-for-a-race-is-weather person mentioned on the news later in the day called it, but better.  As such when the first mile was over, I was already covered in a fine layer of sweat.  Nevertheless, I felt like I was right on pace to give it a go for my goal of the day until I looked down at my watch and was shocked to see how slow I was moving.  A few more miles of uphill running, followed by finally getting down to my goal time around the fourth mile (but only with the help of a nice strong downhill) set the stage for the pullback.  Seeing that it was going to take a herculean effort to get my goal time, and neither thinking I had such a herculean effort in me nor wanting to push the limits of the cranky aforementioned Achilles, I went into my thoughts to reflect on the weekend itself and the race I was running in.


Sure, I wanted to run faster.  My goal had been to run a 55:00 15k.  I ended up running 6 minutes slower in 1:01. Disappointment and surprise accompany that time.  Disappointment because I obviously do not like missing goals. Surprise because when you give up running “hard” halfway through a race, you most assuredly do not expect to be so relatively close to the goal.  I was fully expecting myself to take 1:03 or 1:04 to cover the fabled Boilermaker course and given the whirlwind weekend, such a time actually would not have been much of a surprise. So there is still room for hope that my speed will return, especially when I am not so involved with the pre-race activities.

Of course, these were the types of pre-race activities I would not wish to miss.  First of all, as the guest of the New York Beef Industry Council, I was able to not only sign book and meet people in their spacious tent on the expo grounds, but was able to educate many about the common misconceptions of beef and the benefits of such a protein-rich diet.  I was shocked at how many people did not realize there are nearly 30 different cuts of beef which are just as lean as chicken – the meat which so many people who are trying to eat healthy think is the most healthy source of meat out there.

It is very hard to combat ingrained notions that have taken hold in the public imagination.  It is also just as surprising when those who know much more about the exact scientific studies of beef than myself are not taken at face value. Fortunately, I am given a pulpit in many different ways to not only show the benefits of a certain diet that I partake in but also have people also listen to me as well.  Studies may be true but when you run 52 Marathons in 52 weekends people tend to want your advice on how to stay healthy.  It also didn’t hurt that after three strenuous days of a variety of activities that at a health screening tent my vitals showed I possessed a 120/64 blood pressure, a resting heart rate of 40 and a sugar level of exactly 100. Science and sport together. Even the biggest jackass can’t argue with that.  (Well, yes they can but that is what makes them a jackass in the first place.)

On a running front, seeing both Miki Gorman, a Japanese-American woman who is the only woman ever to win both the Boston and New York Marathons twice and the legendary Dick Beardsley inducted into National Distance Running Hall of Fame was an exquisite feeling.  I got to spend a good amount of time with Kathrine Switzer and her husband Roger Robinson as well, who were on-hand to commentate on the race.  For the first time, I also got to meet Nina Kuscsik, who because of the efforts of many (including Switzer), became the first official female winner of the Boston Marathon in 1972.  Last but certainly not least, I spent some time with my friend Bill Rodgers who I had to, for the first time, decline to go for a run with because I had a radio interview to do.  Bill, like myself, is hardly a fan of working out in the morning, and because of my busy schedule I had to miss our normal run together. 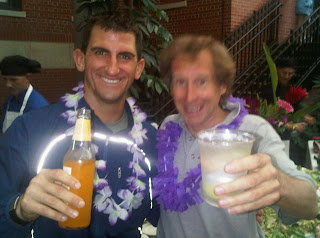 However, every bit of promotion and lost sleep was worth it this weekend at the Boilermaker 15k.  Even before I was much of a runner, living in my hometown nestled in the corner of NW Pennsylvania, I had heard of this large race up in, of all places, Utica, NY.  Growing exponentially by leaps and bounds it has surpassed 13,000 runners for the 15k this year (as well as close to 4,000 for the 5k.)  I would not be surprised if the race must either set some sort of cap on participants or do some sort of lottery system in the future as the race has become so popular.

And why does a 15k, on a challenging course in a semi-remote place, get such large attention?  I noted in a previous post that having a legend like Bill Rodgers in his prime visit your race surely doesn’t hurt.  But I can see that the reason the mystique and allure continues to this day is because of the hard work and spirit of the people of the city of Utica itself.  A race ending at a brewery with an all-you-can-drink theme is obviously going to attract a few people to the starting line. But for those who really don’t give a darn about beer, it is the attention to detail, the clockwork-like precision and the spectators who care which make this event a must-do.

After snaking through a few throngs of people after the starting cannon is fired, the course slips by a golf course for probably the hardest hill of the entire course.  As the crowds thinned here, I thought perhaps the fabled masses of humanity I had heard about were a little overstated.  However, no sooner had we crested the hill at the top of the golf course did the people return in force (my guess is that the golf course may frown upon screaming people on its outskirts and may have said something about this in the past. This is, I reiterate, a pure guess on my part.) From there on out, hardly an inch is covered where there are not hundreds of people cheering you on. Hula dancers, bagpipes, and a newly added drum corps are mixed in with the crowd signs and homemade aid stations (which while nice, are completely unnecessary given the 20, yes 20, official aid stations along the course) to create a carnival atmosphere for the runners.

After a final push uphill around mile 6, runners then get about 2.5 miles of downhill and a slight uphill before finishing on a quick downward slope to the permanent finishline erected outside the brewery. From there, the already packed festival continues.  My intended goal of running in 55 minutes (a modest time considering not one, but three, male runners broke the course record and ran in a time in the 42 minute range) was out the window but my intention to return year after year is now solid.

Make a note for the second weekend in July in 2011 and I hope to see you in Utica as the clock downtown, which has already reset and is counting down until the next Boilermaker, hits zero. If you miss it, you will regret it.
Posted by Dane at 10:50 AM

Dane, I enjoyed spending the weekend with you. Thanks for not breaking 1:00. That made my 1:15:53 seem not quite as slow!