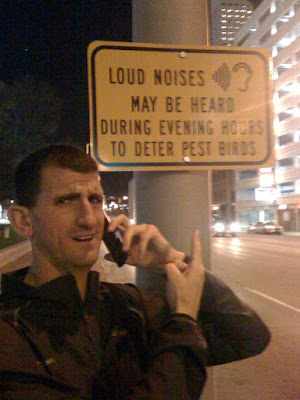 I had no idea what to expect at the Indianapolis Monumental Marathon. Not from the race or the course or the elevation, all which were clearly marked and described on the website, but from myself. I knew I was "recovered" from the Manchester Marathon just a few days before but I also knew that race took a great deal out of me. A short week between races (Sunday to Saturday) plus travel and the expo book signing did not leave much room for recovery either. And when you see street signs like this, you can be even more confused about how much you have recovered and how much you are imagining.


As I seem to respond pretty well to short rest, I was hoping to once again potentially go for a sub-3 in Indiana for the first time. However, as I said to many during the expo, one never knows until they are on the race course what the marathon has in store for them that day.

As we lined up for the beginning of the race, I was also lined up for an interview for WISH TV. Sometimes reporters do not seem to know that even if you are a little relaxed, you would rather not be on camera about 90 seconds before a marathon begins! Alas.

Hoping into the corral mere seconds before the start allowed me the opportunity to see my friend Holly Koester, a wheelchair athlete I have written about many times. It had been too long since I had seen her and the quick hug got me pumped up for my race.

Gun fired and away number 104 went.

As we approached the first mile, I was running with a bevy of half-marathoners. The usual tough task of sticking to your desired pace amongst those running faster than you was made more difficult by the speedsters only doing half of your distance. 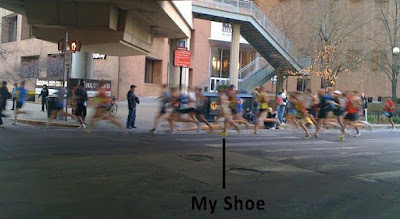 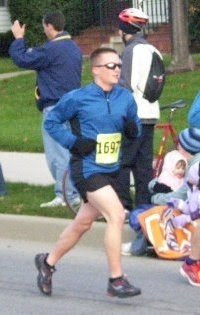 I was really hoping the first mile would be faster than a 6:52 (or 3-hour marathon pace) as I was really feeling it. Luckily, it was but not nearly as fast as it felt. The next two miles brought the pace back down to a more manageable pace but I was quite surprised to see mile 4 being over 7 minutes. Well, I would like to say "quite" surprised but I have to admit I was not feeling good at all. Right after mile 5, I saw my good friend and host for the weekend Allison cheering me on, I pulled close by and told her that I would be surprised if I broke 3:10 for the day and to not expect much.

About a mile later I came upon a familiar face. Anthony, who I had first run with back at the Illinois Marathon and who, as an 18 year old, had put on a gallant effort to run a 3:10 before fading, was chugging along. Just three weeks after obtaining that sub-3:10 here he was again pushing the pace.


As I sidled up next to him he was with a few other runners in a tight-knit group. He introduced them to me and we passed through the 10K mark right on pace for a 3:02. I was surprised that the 6th mile had felt that good but that is what camaraderie will do!

Right after the 7th mile, where I hit my watch prematurely on an apparently old 7th mile marker we saw the halfers turn away. We all joked about how the temptation to turn right, rather than stay straight ahead was almost too much. But a strong of sub 7 minute miles in the next few made us feel much better. I was running with Mike and Ryan and after Anthony had pulled a head for a mile or so, he emerged from a porta-potty and joined us. Not long after that, Ryan's girlfriend Mason (sp?) hopped in to help do some pacing with Ryan as well.

We ran together through some really nice areas of town. Beautiful home after beautiful home along tree-lined streets greeted us. After the first mile or two through some industrial type areas to start the race, I was curious what the course would have in store for us. But plenty of spectators, gorgeous fall colors and nice views along the way were very pleasantly surprising. I must not have been the only one impressed as the marathon numbers alone for this year nearly doubled from the previous year. On top of that, there were plenty of runners here to push a very fast pace. We knew we were way back from the winners as well as a pretty large pack. How large we did not know. 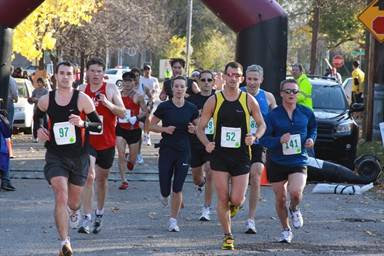 Around mile 9, a slight built woman joined our group. She asked what pace we were shooting for. "2:30," I joking said. "But we are waaay off." Not too long after this. the woman, who appeared to be in the lead for females, pulled a little further ahead. Most of us in the group mentioned this was a mistake as while the weather was pretty cool, it was also pretty sunny and very windy. Sticking in the pack to have us break the win, and maybe even shade her a little bit would have been the smarter move. Even when she put a sizable gap between us, we all thought we would reel her back in. Running as a group has benefits far outweighing the positives of pushing ahead sometimes.

Passing the halfway point, we were looking ahead to the last real hills of the course. Not looking ahead favorably but in such a way that we knew we would either be downhill or flat from there on in.


The wind would blow here and there and at times was quite gusty but it was also cooling as well. I told both Ryan and Mike that this deceptively cool weather should not make us drink any less fluids and we were all starting to get a little salty. How we fared the remainder of the course would depend on our drinking.

Passing the Governor's Mansion and then into the Museum of Art meant we were now done with the hills. Here Anthony said he was going to have to drop back a little bit in order to finish, as the pace was a little more than he was hoping for. As we neared mile 20, Ryan told me that he was on pace for about a 30 minute personal best. I was beside myself with glee and told him he had to do everything possible to make sure he did just that. And the very first thing he needed to do was stop and walk through the aid station at mile 20. His short was dry as a bone  and I could see salt accumulations on his cheeks. The last thing I wanted was him losing this great moment because he feared losing a few seconds by walking.

When we hit mile 20, he did indeed walk and I joined him. I took a full glass of water and calmly drank it. Then a energy drink followed it and I was ready to go. Mike had barely slowed and already was 50 yards ahead. Knowing Ryan was in good hands with his girlfriend and wanting to just be done for the day, I took off.

As predicted earlier to my little gang of runners, we were reeling in runner after runner who had gone out too fast and were now paying the price of both the distance as well as the wind and sun. Ryan put a sizable lead on me over the next mile or so and I was just pushing along happy to be feeling this good so late when earlier I had felt so bad. Around mile 21.5 I realize I had an off chance to run a 3:02, but it would take some work. I began to pick up the pace and caught Mike around mile 23. I told him we could get a 3:02 but it might hurt. He said his knee was bothering him and he wasn't sure what he had in him. I mentioned he was going to be tired and the knee was going to hurt either way, so he might as well push it! As I tried to drag him along to mile 24, he finally said he simply had to hold back. I let him go and pushed through. 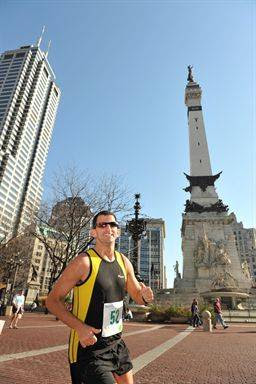 I noticed by trying to pull him along, I had more or less lost any chance to hit a 3:02. I would have had to run 6:45 per mile for the last two miles and I did not know if I had that in me. I did not want to risk it with a PR attempt just 2 weeks away. With about a mile to go I decided I might as well slow it down and get that elusive 3:04 I had never ran. I began to wave to the crowd and high-five all the wonderful spectators who had come out to support the race. The Soldiers' and Sailors' Monument rose up ahead and signified the end was finally near.


Nearing the finish line I encountered a runner who was slowing. I felt no need whatsoever to pass him in the final steps of the race so I pulled along side him and said, "Let's finish this together!" His paced picked up and we turned the final corner heading for home, where my friend Kim, who had finished the half already, saw me and cheered me on. About 10 feet from the finish I took one step back and let him finish in front of me. 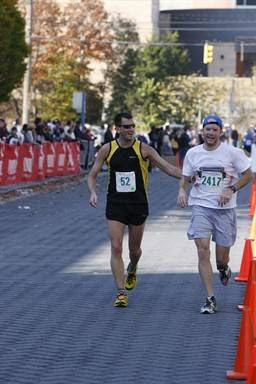 A few second later, Ryan came in with his huge PR. Another hug was exchange and the first words out of Ryan's mouth were: "We have to cheer on Mike!" We turned around and just a minute or so later, in came Mike in a 3:06! Ryan had his new PR and we asked Mike if this was a PR for him. "Sorta," he said. "It is my first marathon." Holy crap!

All in all it was a pretty darn good day for racing. Lots of good stories unfolded during the rest of the day and Indianapolis has itself a fine marathon tradition well underway. I can definitely see myself returning.

Now it is time to rest as much as possible over the next 2 weeks and get that new personal best myself in Mesquite Nevada!
Posted by Dane at 2:32 PM