White Out at Crazy Horse / Run With Bill Rodgers

This past weekend I was supposed to participate in the Crazy Horse Half Marathon. A few hours before I was supposed to leave I got a notice from Delta about my connecting flight from Minneapolis to Rapid City.  It had been moved from that evening to the next morning. Well, that isn't good. As you now know, South Dakota and surrounding regions were absolutely crushed by record snowfall.  I had to make the executive decision based on experience from oodles of traveling to cancel my trip altogether. 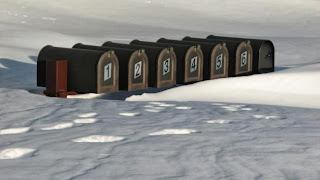 It ends up I probably could have never even gotten to Rapid City by any other means than sled dog. The race was eventually canceled but not due to a lack of trying by the race organizers. Many of those organizers still do not have power today. Rough day all around.

When I went to show support on the race's Facebook page the vast majority of the comments were supportive. Some, however, irked me tremendously.  I do know that one bad comment doesn't undo 10 good ones but I often wonder if people think before they type. Well, actually, I know they don't and the problem with an off the cuff comment in the written form is that it stays there forever, always and perpetually making the same dumb/rude/ignorant statement.

Which leads me to a plea I have made often to runners. Sure, we cannot know all the inner workings of a race and where the money goes and how volunteers are used, etc. I am not expecting runners to know what it takes years of working in and around the industry to grasp.  However, most runners should at least volunteer at a few races. Behind the scenes they will see how it is virtually impossible to honor some of their request for refunds, course changes and any other last minute issues. They will become much more sympathetic to the problems of being a race director and realize there are few people who want the race to go off without a hitch more than those involved with putting it on. 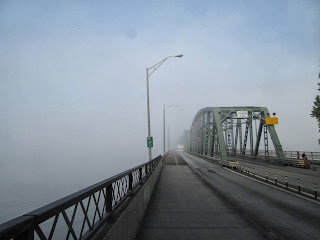 So, staying home, I decided to go for a run and enjoy some of the most beautiful weather Portland has seen in weeks.  The remnants of the typhoon had passed and the fall weather was beautiful.  Lo and behold, I ran into my friend and one of the greatest marathoners ever, Bill Rodgers.

As I had not expect to be in Portland this weekend, I had completely forgotten he would be in town to promote the local marathon.  He asked me if I was going to be in town the next day and if I wanted to go for a run.  My answer centered around something about a bear and what it does in the woods.


The next morning I ran down to the hotel where Bill was staying and lamented greatly I wasn't running the marathon. The weather was darn close to ideal.  Fifty-something degrees, slight breeze and the morning fog of Portland hung over the Willamette River preventing the sun from warming things too much. I was a little late getting to Bill's hotel as the marathon course had barricades up on the streets that I was planning on running on.  I had to make a detour and it was cool to see so many runners out and enjoying the day. I wanted to stand and cheer (and I did for about 30 seconds) but I didn't want to keep my friend waiting.

Of course, Bill being Bill, he wasn't ready because he hadn't left the hotel lobby yet after returning from his emceeing duties at the start of the race. Why?  Because he is so friendly and egregious he will talk to anyone for minutes upon end, usually remembering people he met three decades ago.  I found him here deep in conversation with a local woman who had met Bill at a race probably 25 years ago and apparently he remembered her very clearly.  Bill saw me and realized he was late and excused himself to go change but not before talking to at least 3 other people on the way to the elevator.

I know Bill knew the west side of Portland very well having raced here not only for the famous Cascade Run Off of 1981 but many other events as well. So I wanted to take him to a different side of Portland to a place he might not have seen.  I chose the Springwater Corridor Trail, part of the Hood to Coast route, as the conduit to the Oaks Bottom Wildlife Refuge. I know that with probably 200,000 miles on his legs, Bill definitely enjoys some softer surfaces to run on.  But honestly, I could have chosen the back of an industrial sewage treatment plant and I would have enjoyed the run nearly as much.

My friendship with Bill began five years ago at the Brooksie Way Half Marathon. Since that time, while we have seen each other sporadically, he has given me incalculable amounts of advice. Obviously I love hearing his stories about the great races and places he has been all told from one of the greatest road racers who has ever lived.  But it is the other side of things, the business side behind the curtain which I alluded to above that intrigued me more. 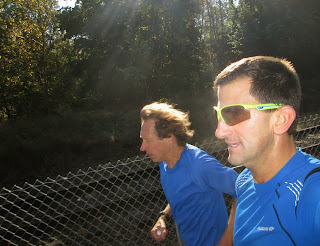 Bill has stayed relevant in the running community not only because his feats captured the running world's attention but because he has made such an tremendous effort to remain in the sport.  From owning his own running shop (which, tragically, in my opinion, closed down recently) to appearances all over the country, many times a year. He may come across as slightly wide-eyed and perhaps a little naive but he is astute and sharp as a tack.

Even in our brief 80 minutes of running together this day I gleaned even more knowledge about the business side of running. Obviously this means a great deal to me as I am very much entrenched in it. There were times I actually forgot I was running with BILL RODGERS OH MY GOD I AM SO LUCKY and felt like I was out with my bud Billy.

Arriving back at the hotel, only after weaving through finished runners, many who did not know that running royalty had just passed them (and many who did and even in spite of being exhausted from their race still found the energy to chat with Bill) we chatted for a few more minutes. Without a doubt I would have gladly sat there in the lobby and chatted for hours more. We both had things to do, however, and had to part ways.

As with every time I part with my friend, I feel a touch of sorrow.  Our get-togethers are far too far apart and usually completely serendipitous. I won't say that makes me cherish them more as I don't think it is possibly to appreciate each one of these moments as much as I already do.  I have tried to impart upon what the feeling is like to those who are not as ensconced in the running world as being a basketball player and not only going to shoot some hoops with Michael Jordan but then to sit down and hear about what he feels about the business side of basketball as well. 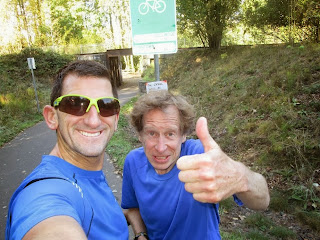 Bill left me with some ideas that I need to follow up with him on. Some potential partnerships and mutually beneficial thoughts on how we could work together.  The business side of me sees this as a windfall.  Mostly, I just want to see my friend more often.

Thanks for the jog, Bill.

I had the pleasure of meeting and chatting with Bill at his book signing at Newington High School where he was on the track team. He is a gentleman and a "regular" guy. It's like chatting with any other runner until it sinks in that he was one of the best in the world. Glad I had the chance to meet him.

Excellent description Dane. I loved the "I just want to see my friend". Reminded me of the end of Shawshank Redemption where Morgan Freeman goes on a long ramble about going to Mexico then ends with "Mostly I just miss my friend". That's really what it's all about.