The final of these seven races for the year came looming just two days after I DNFd the Texas 10 Mile race in Cypress, Texas. As I said in my recap of that race, a small percentage of why I even stopped in the first place was because I knew this aquathlon was on the horizon 48 hours later. The temperatures were going to be to my liking for the first time in two years and twelve different runnings of this series and I had to take advantage of that fortune.

While the greater Austin area was dealing with a series of flash floods that were horrendous for many people, the ensuing weather made it nearly perfect for me to race in. As I got my body paint numbers on I could see that the number of participants was going to be far fewer than usual. However, as I have always said, you can never apologize for who shows up and can only race who is there.

Walking to the beginning of the race set up, my age group nemesis Chad appeared. So I knew that no matter how few people were here, I was going to have my work cut out for me if I wanted to win my age group. 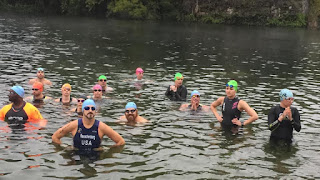 We chatted a bit about what we had been doing race wise and he seemed quite surprised by my workload in the past nine days. I could not stop raving about how happy I was for it to be so cold out. As we climbed into the water we were told that the water temperature was only 75° which was hardly chilly at all and felt quite warm when compared to the 50° air temperature. Lining up to start the swim my goal was to do my absolute best to break my fastest time for this race. Even though I had raced quite frequently in the past week (a marathon, a half-marathon, and then the aborted ten miler) and was far from rested, I was quite sure my theory of how much more temperature affects racing more than the course, preparation or anything else else would prove itself today.

We began the swim and immediately two brothers who are quite the speedsters shot out to the front. Within about 100 yards a third swimmer passed me and I simply tried to keep the rest of them in sight. The gloomy cloudy day made it a little bit more difficult to see where we were going but it provided some absolutely splendid fog lifting off of the water.

After the first turn at the buoy I remained in the exact same position I would for the rest of the swim: fourth overall. I could not tell exactly how fast I was going but hoped it would provide me with my fastest swim yet. As we began the final stretch towards leaving the water I took a long look back and saw that Chad was unfortunately closer than I would have liked him to have been. I felt my swim was stronger than normal and knew I was going to need all the help I could get in order to best him.

Leaving the water I had one of my quickest transitions ever and was soon running on the path around the quarry. Looking at the clock as I started the lap, I was a little disappointed. I had hoped for an overall time a little bit faster than what showed which meant that I was definitely going to have to push harder in order to break my personal best. My time for swim and transition was 12:29 and the other six this year have been, in order: 12:50; 12:30; 12:18; 12:27; 12:30; 12:31. So even though I had blazed through transition, my swim had only been so-so. Obviously, the amount of races I have done recently slowed me but I also have not swam once since the last aquathlon last month. Furthermore, before that I had only had one swim workout. As I had been trying to get ready for upcoming marathons, my swim workouts were neglected.  It is difficult to prepare for all types of races at once and if you are going to do them, you have to be OK with the fact that some disciplines will suffer. Now, I say you will have to be OK with it, but, of course, I never am.  Just because it makes sense doesn't mean I am going to do it!
All, that said, my time wasn't bad but it left me with the unenviable realization that if I was going to PR, I was going to have to run my fastest run of the year.  I knew that the only way that I was going to break my personal best for this race would be to take advantage of the weather and run much faster than usual. 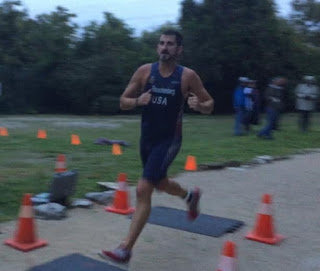 Beginning my run I hoped my advantage over Chad would keep him from passing me sooner than usual. However, I can see from the results I only had a seven second head start on him when we commenced our trot. I felt like I was flying but found I was only able to hold him off until the hill on the backside of the loop. Every time we have raced he has put a great deal of real estate between us on this backside and then I normally make up some of it on the front side which is more downhill. I wanted to stay in his backpocket as long as possible to take advantage of the competition. I hoped he would be able to pull me along like he had pushed me for 2.5 laps once a few races ago. Unfortunately, I just didn't have the leg speed today. When I hit the first loop in a time of 4:28 I realized that was my fastest first lap of the entire year. Still not what I was hoping for but it gave me a shot at that personal best.

Over the next lap, Chad increased his lead with a blistering time and I dodged the first of one or two runners that had come out of the water behind me. I tried to dig deep realizing I only had about five more minutes of pain to deal with but I could definitely feel the races in my legs from the past week. That said, I ran an identical 4:28 lap which surprised me as it felt a bit slower. It also meant that if I ran the same lap I would break 26 minutes for the race but I would not break my PR for the course. I had to run faster.

The path was a bit more crowded now and I had to dodge one or two runners who took a little bit wide on their turns or became a little bit flustered and did not know which way they should go as I tried to pass them. It only threw me off for a second or so but it was a little bit frustrating considering how little time I had to play with. I could see that I had narrowed the gap a little bit on Chad but there was no way I would catch him. It was all about getting that PR. 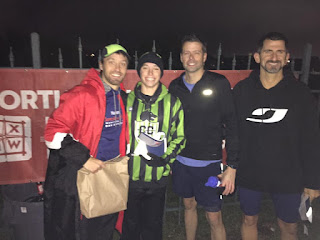 Branches obscured the clock from my vision until I was merely 20 or 30 yards away. I could see if I strained I had a chance to break that PR. A few seconds later I cross the line and 25:46 for a PR of three seconds. I ended up one spot off of the podium in fourth place overall. Damn you, Chad. Suffice it to say this was an absolutely excellent way to end this series of seven races here at the quarry.

When I started these last year I figured it would just take me a few months until I was back in my high school swimming shape. Then life intervened. I had a great deal of financial troubles last year stemming from a variety of things. First, as I took a more vocal political stance in 2017, I lost tons of engagements from companies which simply wanted more vanilla partners who didn't rock the boat whatsoever. I expected that but didn't expect the people for whom I was fighting to be so silent. Then I was attacked by two muggers in Austin and fractured my face and hand. A subsequent setback from that was the cancellation of a series of races I was putting on which was another hit to my pocket. Let's just say I wasn't too much of a fan of 2017.

This year was marred by just an ungodly heaping of ridiculously warm weather. Going into tonight the race temperature for the previous six races had been: 86, 89, 77, 100, 104, 91. It is not surprising that even though I was swimming very hard in the summer I couldn't produce good times. The weather, at least for me, forbade it.

This is the happiest I have been with a race in, man, I don't know how long.  I hope to use this to springboard into the fall and with a continued forecast of cooler weather, October might actually be some good training for me.