Having run the Heart Breaker Half last year, I knew what was in store for me this year.  Basically, if you don't want to click on that link, let me simplify: I knew I was going to be running my fair share of hills. Fortunately, my body was in much better shape this year.

Note I don't think I am in much better running shape this year. Rather, this time last year I was developing a problem with my calf that would leave me hobbled for half of March and occasionally for other portions of the year. In 2015, however, I knew I wasn't dealing with that problem and my goal was significantly different.  Instead of just surviving, I wanted to give the course a solid go. With the Phoenix Marathon in two weeks, this would be a barometer run.  Not an all out effort, mind you, but rather one where I see where I am on this exact day and how that points toward the future. But I did want to take myself under 1:30 - something I hadn't done since my PR of 1:20 a little over a year ago.

One of the things I love about not traveling to races is sleeping in my own bed. Even if I have to get up and drive a few miles or more, my own bed with my own clothes in my own drawers is just a marvelous thing. This race was no exception as from the minute I left my door until I parked in the school parking lot which served as the start and finish of this race, was 20 minutes exactly.  Couple that with a nice warm gymnasium/lunch room to sit in with plenty of bathrooms and this is the ideal setting for a race. Five minutes before the race started, I walked out the door, hustled across the track we would be ending on in just a bit and lined up for the start. That is perfection.  Just like gum. Gum would be perfection. (Google that if you don't get it, you damn millenials.  Or here.)

Since I do not even warm up in any race until 6 miles in (which makes 10Ks a bad race option for me), and I don't exactly like starting a run by going uphills, this race presented a little bit of a problem. The undulating hills were bad enough but the namesake of the race (which was actually a combo of three hills separated by two different right angle turns) awaited from miles 3-4. The race has a special timing mat to show who gets to be the King/Queen of the Hill, as you were. I knew the crowned royalty wouldn't remotely be me and last thing I wanted to do was kill myself 23% through a race. Even more so, I wanted to get up the hill without dying before I even got to it. So I took off at the start in what I felt was a conservative pace.

Normally, I say that I felt conservative, look at my watch after one mile and see I have ripped off something 30 seconds too fast. This time, however, it was right what I thought it would be:,which of course, worried me to no end. If it felt good and it wasn't fast, does that mean the rest of the day was going to be too slow? Fortunately, the next two miles played right into my plan. Now time to tackle the beast.

Surprisingly, the beast felt much easier this year than last.  Knowledge is power and knowing it was there, and wasn't going to require a Sherpa and an oxygen mask, made it much easier. In fact, I think I hit the mile in a little over 7:10.  Not too shabby.  And only one person had passed me during its ascent.  Not too Shabby 2: Electric Boogaloo. 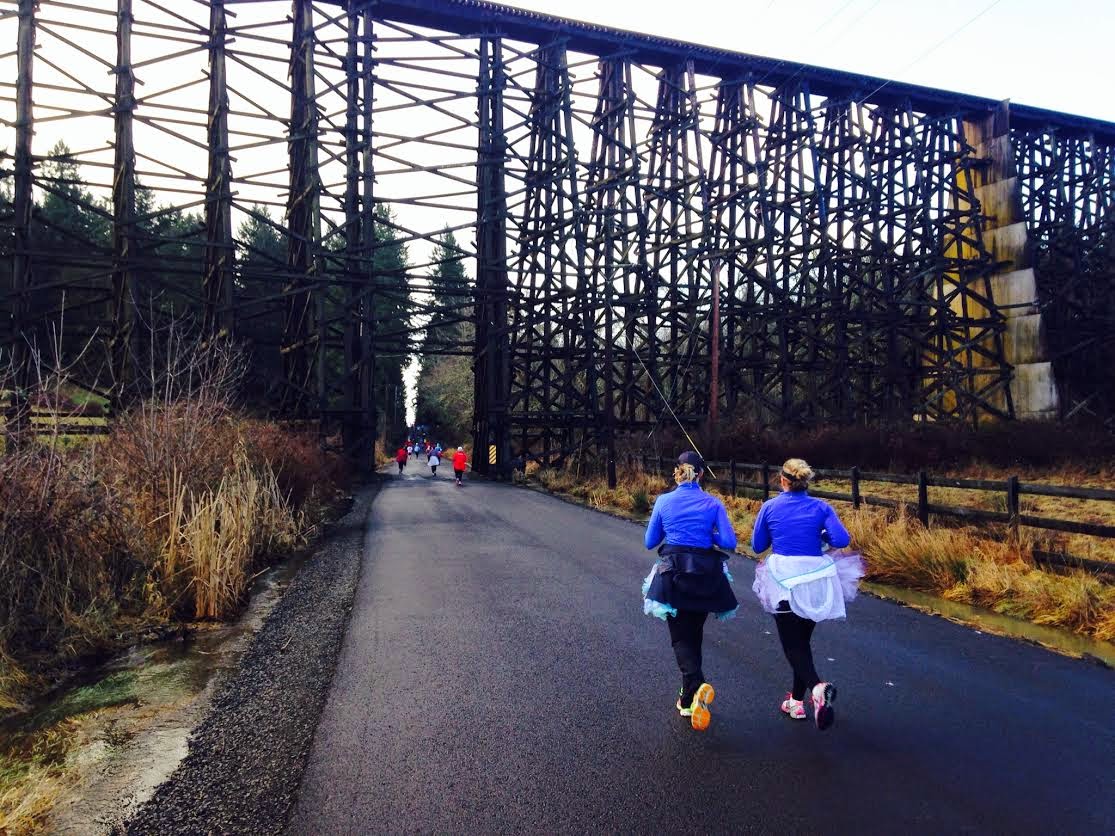 My favorite part of this race is cresting the big hill, coming down a nice steep downhill and running under this ridiculously high railroad trestle. It really comes out of nowhere and seems completely out of place. It always picks up my spirits.

After that is a quick up and down and then you join the 10k runners on what will be your first of two loops of a 4.5 mile section.  This part I do not particularly care for (either loop) because of how you have to bob and weave through the masses.  One of the reason I want to continue to run as fast as I can is so I don't have to run with the crowds. I don't like people around me when I am racing. I want oodles of elbow room. Not sure why that is but I think the contact sport portion of my brain doesn't want people that close. Don't get me wrong. This section is hardly NYC-subway crowded but it is more than ideal for me.  The long slow gradual climb followed by another quick downhill takes you to a good mile flat straightaway with just an elbow of a curve. Here you have a chance t open your legs a bit and get into a groove.  Up head you can see the turn you have to make and the runners in front of you.

Up this quarter mile gradual climb, you then punctuate this loop with a steep down and back up.  That is your 4.5 mile loop.  If you are running the 10k you turn to go home.  If you are running the half, you get to do the second and third miles of the course again and then the remainder of the loop you just did.  I like knowing what is coming. I just wish what was coming was less hilly.

Starting the second loop I had not really done any math with regards to my splits. I had run a 1:33:14 and change here last year and l knew I was much faster than that here. How much faster I couldn't tell for sure.  When I hit the 9th mile, I got a better picture. It was going to take some slacking for me to not go under 90 minutes. Also, if I picked up the pace I was looking at something in 1:28. Hardly smoking fast but better than I had done in quite some time. The first 7:00 minute mile of the day other than the hill didn't make me feel good but I had eased off the throttle a bit getting ready for the last four miles.

I had been running in a bit of a vacuum for most  as the last person who passed me had done so at mile 5 and I only passed one person at mile 8.  Even with all the other runners I was passing who were a lap behind or in the 10k, it gave me no idea of my actual speed. I saw the women's leader up ahead but as she dodged  runners with headphones in who were not really paying attention, I could not mentally lasso her to use her to pull me in.  I was basically stuck not moving too slow but not moving fast enough. I was pleased that more than a few people did have just one headphone in or the volume low enough to hear approaching footprints. Unfortunate, in the midst of a race you forget those nice people an concentrate on those lost in la-la land an walking four abreast. Slowly.  If looks could kill.

When I hit the 11th mile, I knew I could run two 6:51s and that would get me under 1:29. Running a 6:52 for the 12th mile didn't dampen my spirits because of the huge hill in that mile. Accordingly, I knew I had the time in the bag. I just had to execute. It is when I know what I need to do I can reflect, even when I am in the middle of a race.  I thought back to relatively excellent race organization.  I don't know why the one aid station on the downhill around mile 2 (and 9) was on the far outside of a turn, and on a steep downhill but it was. Other than that, the volunteers were friendly and helpful. (When going back onto the course to cheer on my friend Shannon, I was able to garner a few extra seconds less in Runner Purgatory by stopping two runners from running off course less than a quarter of a mile from the finish and then moving a sign to make it more prominent to other runners as well.)

While I was doing the thinking, I realized this last mile felt good. Not thrilling but nice.  I stretched my legs out. I felt the road beneath my Karhu Flow Light shoes. The beautiful sunny sky beat down on my face and as always I was happy to be wearing my Julbo sunglasses. Even though it was only 45 degrees the I/O Merino wool shirt I was testing out kept me amply warm. In fact, I was more than covered in sweat. I don't remember being this sweaty as an athlete growing up by by golly I sweat a lot now.  How I ran with just two sips of water on the course is a testament to how I camel-train myself on a daily basis.

There was a much tougher field this year than last. I could hear a runner catching up to me in the final stretch but I had too much left in the tank and they did not have enough real estate to make a surge. As I crossed the finish in 1:28:51 in 18th place, I know this would have netted me a top ten last year. This bothers me none as place finishes are far more a by-product of who happens to show up. Instead, the time pleased me greatly as it showed I was much further along at this point this year than last. (As a side note: the runner right behind was a 16 year old girl.  She basically ran the same time as me. That's an impressive run, young lady.)

Times are basically irrelevant.  No one really cares whether I run another sub-3 in Phoenix in two weeks but me. Those who like me will support me if I don't. Those who don't like me will find excuses if I do.  The only person that matters is me. We have to look at ourselves for most of our pleasure and satisfaction. I know that each run is a crapshoot.  Did you not feel sick that day? Were you able to keep your ankles twist-free?  How did last night's dinner sit in your stomach?  These are questions we can only find the answers to when we put our shoes on and hit the road.

Today's answer to the many questions was I was quite pleased with how everything went.  Time to get ready for the next race. Thanks to the AA Sports people for always putting on such great events. Looking forward as always to running more.