In Miami to participate for the 5th time in some capacity for the ING Miami Marathon, I didn’t have much of a goal. The weather promised to be actually a little cool for the beginning of the race about a week beforehand. That promise was broken as the projected temperatures climbed each day. Moreover the dreaded humidity that simply saps me followed suit. By the time of the morning of the expo, I knew I was definitely not in town to race. So I decided to have some fun.

First, the expo was a wonderful experience as it always is when I come to Miami.  I have such a wide and diverse group of friends in the area that seeing them all is rather difficult.  Combine that with the fact that every time I come to South Florida I make new friends and my cup runneth over. 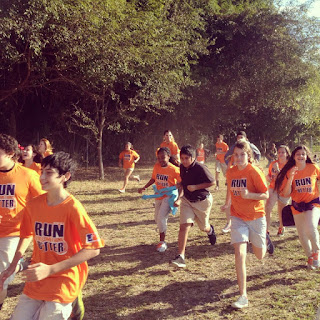 Prior to the race I once again had the privilege of being inspired by the ING Run For Something Better Program.  Through this free school-based running fitness programs, RFSB “challenges children to get active, set goals and start a lifetime habit of physical activity.”  Having been involved with it on three different occasions I can say that they are doing it right down here in Miami. I was presented with a chance to talk some kids right before the expo on Friday and then do a lap with them around their playground.  In the background, during a physical education class, one of the instructors was teaching the kids how to mamba, or samba or some other latin-infused dance.  Talk about awesome.  As I see more and more schools make P.E. non-mandatory, I thought about how fun of a way this was to get kids to be active.

I also spent time with Justin Loa, a child confined to a wheelchair. With the help of an iPad and a guiding hand of one of his instructors, he could type out messages to me and have the program “speak”.  When after learning he was 11, I told him that in a few years he could be driving.  He hilariously responded “Bad idea.”  I don’t know, Justin –in five years this super intelligent kid might invent a way to make that possible. 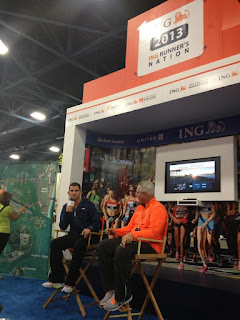 At the expo itself, I spent two days talking and learning and visiting.  With Dave Scott, the race director of the event, and my good friend G.P. Pearlberg, we spent two separate hours talking to those who wanted to learn how to run this race. Following an intimate course description (I have run it 5 times, Dave Scott has designed it, and G.P. has been on the lead car for all 11 years of the race’s existence) a question and answer session followed. It was fantastic to let what I have learned hopefully help someone the next day. As I say, knowledge not shared is wasted.

Somewhere during the expo, while people were walking around with giant orange inflatable “fist bumps” it was presented to me that a way to make this race harder would be for me to run the entire race wearing the contraptions. I will probably rue the day I agreed to that but alas. The die was cast.

As I stood in the corrals, already feeling the sweat running down my back, I happened to bump into my friend Sergio, an ultra-athlete whose feats are just remarkable.  Next to him was a friend, Matt, I had spoken to on Facebook but never had the opportunity to meet.  Quite a small world racing is.  Here in a crowd of 25,000 I just happened to hop right into an area where I knew two people.  As I stood there waiting for the chance to begin running, someone commented on the gigantic hands I had on.  “How are you going to grab a drink?”  I looked down disdainfully at the gloves and replied ‘I obviously haven’t thought this through.” When the fireworks went off, the confetti showered down and we began our run from Miami toward South Beach, I figured this might be a tough day.

Within half a mile as we encountered the only hill of note of the day on the MacArthur Causeway, I found myself running next to two guys.  They asked what time I was hoping to hit with these monstrosities on my hands.  I said I had no idea what to expect. They mentioned they were both hoping to hit a 1:35 and would I care for some company. Obviously the more running friends the better so I welcomed them.  I told them I would be happy to help them get a 1:35 and we began running together. 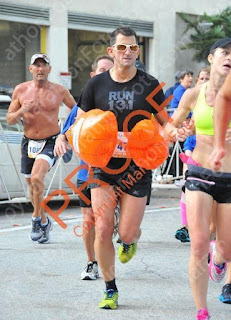 Over the past few days of speaking at the expo and other functions, I had developed a slight case of laryngitis.  As such, I wasn't able to say much to the guys but simply kept nodding and looking as interested as one can when it is rather dark and you have pool floaties on your hands.  As we approached the first few miles, I could feel sweat pooling inside the gloves. I raised my hand toward the sky and the sweat came pouring out.  “That was a bad idea, wasn’t it?” one of the guys said.  He was very correct.

Hitting South Beach around mile 4 it appeared my comrades may have overshot their goal for the day.  They were already fading a bit and even though I slowed a bit in hopes of trying to keep them on pace, by the fifth mile they had fallen off the back of the truck.  I was hardly feeling too stellar myself but soldiered on.  A man appeared next to me and told me my hands appeared to be swelling.  As I laughed I looked and noticed he was a guy I had met probably three years ago at a book signing in Fort Lauderdale.  “Brian, right?” I asked. “Wow.  That is one memory,” was his reply. I told him my brain had to be used for something since it obviously wasn’t good at decision making. I held my orange blimps aloft and emptied the buckets of sweat down my arms.

As the next few miles unfolded, I kept looking for someone I knew up ahead or maybe someone closing in from behind to run with. I have no shame in saying I was struggling. I was astounded how hard it was to run with these stupid gloves on but I would be damned if I was taking them off. I made it 9 miles with them on, I would keep them on the whole way. Cracking wise with volunteers and fist bumping as many spectators as I could, I was having as much fun as any runner can who hates heat and humidity yet is mired in it. 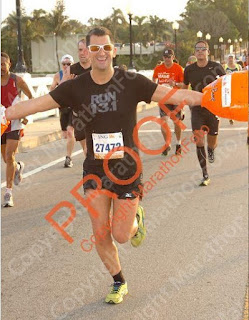 Crossing the Venetian Causeway, one of my most favorite miles in any race in America, I looked at all the house nestled right up against the water. I often think what people’s lives are like in different areas of the world, how they got to be there and what is going on in their minds when an event like this traipsing by their door.  Chances are half the people in these homes are completely ignorant of the fact that tens of thousands of runners, from all over the world, are pushing themselves to their limits mere steps away. I find that humbling.  It is easy to get wrapped up in an event and think that the world revolves around you because everyone you know is wrapped up in the event as well.  All it takes is one person, located very close in proximity to where you are, to have no idea what you are talking about, to bring you back to Earth. It is never a bad thing to refocus yourself like that and see a grander picture.  Times like this, when I am hurting and would have gladly taken a shuttle back to the finish if offered, allow you to disassociate with the discomfort and take a deep breath.  Then it is back to embracing the suck.

After passing through the huge cheer tunnel at the 11th mile, it is time to get back on track and be happy that there is only 2 more miles to go. All the way up until about mile 13, the marathon and the half marathon share the same course. There is an abundance of runners, sweating, pushing and breathing together. One giant mass of humanity pulsating through the arteries of Miami. But when you are having a rough day like I was, where I hadn’t looked at my watch all day (it was covered by these infernal oven mitts) you could not be happier to see the turn marked for half marathoners to go home to the finish. Waving goodbye, metaphorically or literally to those doubling your distance, it is time to take in your own personal moment.

As I crossed the line in my slowest half-marathon ever where I wasn't either pacing someone or in an Ironman 70.3, I realized that if nothing else, I had just done some nice heat acclimation training for my upcoming Panama Canal Run.  That put a smile on my face. 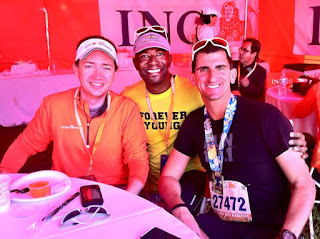 Later, when I was running with Justin and his father, pushing him for the last 1.2 miles of the RFSB 26.2 mile challenge, we traversed the exact same course I had run a few hours earlier. I rarely need to be reminded how lucky I am to be able to do what I do but refresher courses are never bad.  As Justin smiled, his younger brother Julian, ran alongside him.  Soaking in the well-deserved attention of the crowd, I can only hope it is programs like these which will continue to push children to be active. Exercise is paramount to the success of not only Americans but the human race. When we let our bodies grow lethargic it is only a matter of time until the mind follows suit.

As I am about to launch my own non-profit organization bent on inspiring others to chase their dreams and push their physical limitations, it was nice to get a reminder as to why I have made this my life’s work the past few years. Spending a few days meeting and speaking with others, all attempting to do the same is not bad either.

Love to hear about the nonprofit you are about to launch. The pains I have gone through with Bridges could be helpful. Nice work in Miami!