A Runner's Ramblings: Volume 4; 13th Edition
322.4 miles raced in 2009
Race: Rock N Roll Marathon
Place: San Diego, CA
Miles from home: 751 miles
Weather: 60s; cloudy, humid
My original goal for my birthday run was to do 7 miles after the marathon. That didn't work (or more accurately, I was told last minute, for no real reason other than incompetence that it wouldn't work), so I switched to running 7 miles before the marathon.With this change, I knew I was going to be a tired puppy for the "actual" race. You see, the run before the actual race contained a nice little hill which I hadn't originally had in my plans.  But hey, at least someone got their way, after they removed their panties from the bunch they were in.

In order to make sure I had enough time to get to the start of the race and get into my starting corral for the 6:30 AM start, I had to leave my mile 7 starting point about an hour before that. That means I had to be up at 4:30ish. Yuck. Fortunately, by complete luck in booking a hotel, the mile 7 marker was less than two blocks from where my hotel was. Yay!

Prior to the race I had one of the most physical and mentally exhausting weeks in recent memory. My idea of running a sub-3 hour marathon after the 7 mile warm up was rather ambitious for someone ho is only a 2:49 PR guy to begin with but the additional events that transpired made it even more difficult. When I saw the race day temperature would barely get into the mid 60s by the time I should be finished I rejoiced. However, upon waking up, dressing and heading out to the door to 91% humidity, I knew I was going to have to re-evaluate my plans.

A rather uneventful jog backwards through the first 25% of the course is what transpired, if you do not count me making one wrong turn and having to backtrack. Also the looks of all the volunteers as a runner with such a low number (the Rock N Roll Marathon people were kind enough to give me number 33 for my 33rd birthday) was running in the complete wrong directions, miles from the start, not too long before the race would begin was quite funny.

As I neared the start, I made note of how much I was already perspiring and how little of it was evaporating. Yep, I was not going to be running a sub-3 today.

In the VIP area just minutes before the race, I had the distinct pleasure of meeting Ryan Hall for the first time. Ryan and fellow US marathoner Josh Cox (who I have actually had a few email conversations with and appears to be a very nice guy) were pacing the son of the London Marathon Race Director in hopes of running a 2:25. Full details of how and why can be found here. Ryan turned out to be the same humble, self-effacing and polite man who also happens to be the fastest US-born American marathoner ever. It was quite a pleasure to meet him.

Before long the Running Elvi were assembled, the Team in Training masses were readied, the skinny elite runners were prepped, and the gun sounded the beginning of my 98th lifetime marathon.
First 10k: 6:40, 6:59, 6:56, 6:33, 6:52, 7:11
Just a few hundred meters into the race I heard a familiar voice and my friend Sam appeared next to me. Sam has the enviable distinction of having one of the most painful personal best marathon times out there: 3:00:04 (or something akin to that). Agonizingly close to breaking 3 hours and doing so at a solid 190lbs give or take. This after once weighing in excess of 260 lbs. I asked him if he as going to shoot for sub-3 and he said he would see what the day would give him. I told him I would be happy to run with him as long as possible and try to help him out.

The next few miles had us feeling out the course and having just ran it about 45 minutes earlier I was able to tell him exactly where aid stations and everything else would be set up. I had a plethora of people wishing me Happy Birthday,apparently noticing the "See Dane Run" on the back of my singlet and having heard my story in the days prior. I was flattered and touched.

Right after the 10k mark I could tell Sam was struggling to keep up the required 6:52 pace. He told me that I should just go ahead without him and shoot for the sub-3. When I said I was happy to run anything under 3:10 I could sense he had no problem with me pulling ahead. Before I knew it, I was doing that exact thing and this is the last I would see of Sam on this day.
To the halfway: 7:12, 6:57, 7:30, 7:04, 6:18, 7:11, 7:00
Elapsed time: 1:31:17
Around mile 8 as we began the climb through the biggest and one of the only hills on the course, the need to use the restroom overcame me. Well, actually it overcame me a while back but the necessity of a portapotty is what held me from remedying the urge I had.

Taking my sweet time in the bathroom, partially as I was drenched in sweat and was hoping to cool off a bit and partially because the toilet paper had not been removed from its protective wrapping, I was in the bathroom for much longer than one would normally do so in a race. When I came out I expected to see Sam and thought I would encourage him to get moving. Unfortunately he was no where to be found.

At the top of the hill around mile 10, I was feeling pretty good, especially since this was essentially mile 17 for me and typically where I start to play mind games to keep myself mentally sharp. Right here my good friend Kate appeared and ran with me for about 100 yards. Cheering on her friend Sonia she said she had been looking for me as well and hoped I held together for the rest of the way. I told her to wish her friend good luck and tell her husband Jimmy he is a chump. (Just kidding, Jimmy. Good luck at Western States in a month!)

Somewhere in the next few miles there as a line of teenage cheerleaders. With the effects of humidity and the miles weighing on many, their cheering efforts were not being acknowledged by many of the runners. I ran over and high-fived them all, grabbing pom-poms and doing a "We Love Runners yes we do! We love you runners!" cheer.

A little further down the road I saw a black lab who looked just like my parents puppy at home so I stopped to pet him and let him lick the oodles of salty sweat off my arm. I think I was his most favoritest runner of the day.

Around mile 18, I knew my friends Todd and Lisa would be waiting so when I saw them on the side of the road I pulled up and sauntered over nonchalantly. Todd said that when he saw me stop he thought: "uh-oh!" But we chatted for a bit, I told them that I had essentially run a marathon already and was a big idiot for taking on 7 more miles at the end. After a few more seconds of talking I told them I needed to skedaddle.

Barely 100 yards down the road my friends Cindy and Christy who own Running Skirts.com gave me a holler. I waved and one of them began running with me. Looking at her Garmin she said" I want to see how fast you are running!" I replied: "Well, let's see how fast I can go!!" and turned on the burners. She laughed and fell back before snapping a picture of me passing by. 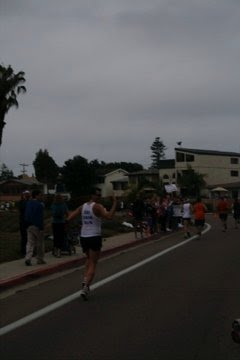 I had barely gone another quarter of a mile when a voice shouted out: "Dane Rauschenberg!" There on a bike was a law school classmate of mine who I hadn't seen in 7 years! This was the busiest stretch of road I have ever had in a marathon!

I suddenly had new found energy and even with my breaks to tussle little kids hair, grab popsicles from spectators and have a merry old time, I was still running some great miles.

To the finish:7:13, 7:53, 7:00, 7:29, 7:48, 7:48, 1:43
As I crossed the bridge at mile 20 and headed past Sea World, I saw the last major exchange for the relay race ahead. Tons of people were crammed onto the sides of the road and a very familiar voice came over the Loud speaker. It was my buddy Rudy Novotny! When he saw me he immediately began to say so many nice things about me to the crowd. I think he was a little shocked when I came up to him and stopped to say hello. Rudy told the crowd I was doing 33 miles on my 33rd birthday and there was a huge cheer! After talking for a few more seconds, I said: " OK, Rudy. I guess I better go finish these last few miles!" and away I went.

A few miles later, one of the many rock bands on the course was playing a little AC/DC or some other hard rock stuff and I began to headbang as I went by. The band loved it and when I threw my hands up in the air he gave me a wave to "come on over." What the hell? I ran over to the stage, up a few steps and started head banging on the stage! "It's my birthday!" I yelled before jumping down and getting ready for the final 5k.

As the final miles ticked away, a girl I had run past and then fallen behind numerous times by stopping and talking to people, came up to me on my right. With less than a half of a mile to go, she was going to get a huge PR and a sub 3:10. She said, "Come on, Dane! Let's go!" I told her "No way! You earned this 3:10, you need to run in all alone, Erin!" She smiled brightly and said: "Well, I couldn't have done it without your encouragement and fun-loving spirit out here on the course." It was my turn to smile big and I playfully pushed her forward and said "Go get it!"

In the final 100 meters I began to wave to the assembled masses and thanked them for being out there. 33.2 miles after I started running that morning, with the final 26.2 timed, I crossed the finish line in 3:09:47.

Very cool race report - fun to read, and I am sure much more fun to run!

I think that was my favorite of your race reports - and I'm pretty sure I've read them all.

I love to read about your pace groups and your attempts at time goals but it's nice to see that you just decided to have fun and still ran a great race anyway.

Happy Birthday! If we would have known we would have thrown a cupcake to you! You blazed by so fast we barely got the photo! Glad you enjoyed SD. Nice race!

Happy (belated) birthday, Dane. Glad you had such a fun run to mark the occasion.