Napa to Sonoma Half Marathon Recap 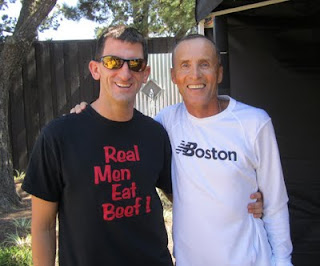 I had been intending to run the Napa to Sonoma Half Marathon with Dick Beardsley, who is gearing up for the 30th Anniversary of his epic Duel in the Sun with Alberto Salazar. However, about a week prior to the race, Dick suffered a setback with an injury to his quad tendon and would not be able to race. First and foremost, continued good vibes are sent to Dick, the one man who probably deserves nothing but good in this world but keeps getting handed a solid ration of poop.  Somehow he always comes out smiling on the other end.

Nevertheless, this left me with a sudden change in plans myself as I was unsure what exactly what I was going to do on the race course. continual aches in my left foot have troubled me a bit so I knew that in spite of the fact that the weather looked as if it may be absolutely perfect for racing, I was well aware I should not "race".

When a friend, Anthony, mentioned he was hoping to set a new PR, I asked him if he would like some help in doing so.  when he said yes, I now had my plan for race day.

Both days of the expo were a treat as I got to meet lots of people whose paths I had crossed from previous races and also many new friends.  Working with the California Beef Council it was a treat to be in this area of the country which is, how do you say it, not exactly "beef-friendly".  this allowed me to keep sharp in discussing not only the healthy benefits of eating lean beef but also squash long-held, and incorrect, negative thoughts on production, shipping and the care of the animals which provide the food we eat. On one particular occasion, while someone was rather rudely espousing a (false) opinion on the subject, I patiently waiting until they were done talking to give my response. However, before I could, someone who had been standing by silently spoke up. 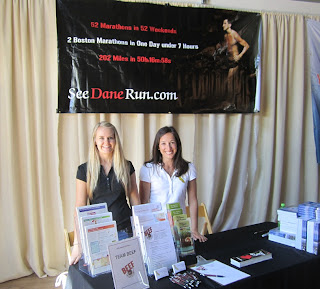 I looked at the person with an eyebrow raised as if to say "Please continue."  The speaker then identified herself as a cattle producer and shot down virtually every point the previous person had said, and did so from someone who could give an inside view.  They also did it in a calm demeanor as if this was not the first time they had to correct someone's incorrect view on how the entire industry is portrayed.  When they were done, the original party looked at me where I simply smiled and replied "What she just said."

The rest of the expo was spent meeting more than a few people from all over the country, who were more than happy to be supporters of beef.  In fact, Anthony, who I would be pacing the next day said he was so much stronger and healthier now that he was once again eating beef, haven given it up for some time a few years back. I told him he would need it if we were going to break his PR! 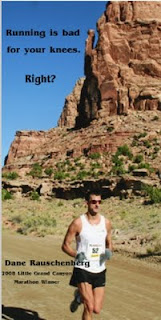 A rather uneventful morning unfolded as I silently slipped onto the bus taking runners to the start of the race from the finish.  There was a great deal of giddiness on the bus while I simply tried to sleep. I apologized to my seatmate for being boring but they said they enjoyed the peace and quiet. i was able to give some last minute pointers to some first-timers who asked and I can see from their results that they probably followed them, as well as their own solid training and hard work.

I knew it would not be hard to find Anthony in the crowd given he is 6'5'' and change.  Having just started running last year he had made enormous strides (ha!) in lowering his times all while somehow also removing knee pain at the same time.  Sure does go against the adage all the non-runners say, right?

We were psyched to go and get the race underway.  I told Anthony I would be taping the whole thing on Flipcam so that he could have a memento of his awesome new PR. I was flattered that he left both is heart rate monitor and his watch at home, completely buying into me getting him to the finish line faster than he ever had before. The airhorn shrieked and we began.

With a nice downhill to start, followed by the biggest uphill of the whole course, all in the first mile, we had a chance to just shake out the sillies. The weather remind perfect for running as we got into our groove. I was trying to keep up right at a 7:38 pace, one that is a little odd for me to run. As I do not have a heart rate monitor or GPS I simply go by feel which has always worked for me in the past (e.g., three years in a row I was the Carlsbad Marathon 3:10 pace group leader with a time of 3:09:52, 3:09:52 and 3:09:54)  However, I knew we were cruising along very well and Anthony looked solid.

On  a couple of occasions a runner or two would pass us and draw us into their slipstream.  After a few hundred yards, I would say we needed to back off just a bit.  Anthony would tell me that my timing was perfect here and right when he felt we were pressing, I would tell him to slow. When you are trying to help someone, knowing you are actually doing so makes you feel pretty darn good.


I always think miles 6 and 7 are the hardest of the half-marathon.  The first exciting few miles are done and it is not the final push for the finish.  You are stuck smack dab in the middle of 13 miles of running.  As the course would undulate here and there, never going all that high or low in its hills, it allowed us to really test out how to run these hills.  Anthony would later tell me that mile 5 was the hardest of the race for him and he had really slowed.  With a large hill here I can completely see why.  But we crested that and slid into mile 6 on a nice downhill to even things out. We were virtually right on the nose for Anthony's pie-in-the-sky goal of a 1:39:59. I knew we would have to really make it hurt over the last half to grab it but either way we were going to destroy his previous PR.  I told him this flat out too and did not pull any punches.We may not get the "A" goal but everything else was still on the table.

I had begun to employ running tricks to keep Anthony's pace going where we wanted it.  for example, I would say we needed to run faster to certain objects in front of us with the promise of slowing down once we hit the objects, hoping that each time we slowed, the actual "slowing" would be less and less. This worked fairly well until we hit what was the last hill on the course right around mile 9.  I remembered this hill myself from the previous year and how it had brought my pace down as well. (My time for miles 8 and 9 last year? 6:20 and then 7:01. See, Anthony?)

I knew we were not getting a sub 1:40. But I felt if we could just do 7:45s for the rest of the way we would have a chance for a 1:41:xx.  As Anthony is just as big a chocolate milk drinker as I am post-race we began to talk about this.  I told him that even if there was none available in the post-race spread, if I could get a 7:45 or less out of him in the last three miles, I would find him a frosty chocolate milk to gulp down.


With all the hills done and nothing but a flat stretch to the finish, I was doing everything I could to keep Anthony on 7:45 pace. I could see from the strain in his face that he was giving everything he had. With the final turn onto the main drag leading to the Sonoma City Hall in the distance, Anthony was digging as deep as he could. When he finally passed under the finish arch, he did not get the sub 1:40 goal he had been hoping for but still lopped off over 2 minutes from his previous personal best, snaring a new PR time of 1:42:32!  I finished one second behind him to capture this shot here. 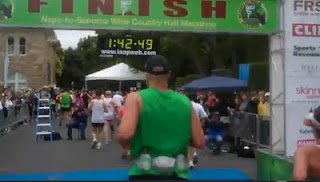 It was quite a splendid day in Napa for this race. Destination Races really put on some great events. At one of the earlier aid stations it was apparent that some volunteers had missed their assignment and weren't there to fill the cups or hand them out to runners.  So what happened?  The Race Director, Matt Dockstader, who had been patrolling the course on a moped making sure everything was OK, was feverishly filling and placing the cups onto the table, all with his moped helmet still on his head! I am sure he did that until helped arrived and then quickly sped off to fix anything else which may not have been up to snuff. This is the kind of dedication one who had put on their own races as I have really appreciates from the staff of a race. You cannot go wrong with any of the Destination Races so I suggest you meet me in Portland on Labor Day weekend for the Oregon Wine Country Half Marathon!

in the interim, in a rare week at home, I am going to rest this sore foot and do nothing bu bike and swim.  Not exactly what I think the norm is the week before a huge 10k PR attempt but I haven't really done anything by the book before.  No reason to start now!

Thanks for the video recap of Anthony's and your effort it was fun to watch. That is a fantastic area to run in. I have done some races there as well, and it is always a beautiful spot. Good luck on your PR attempt this week along with mending your foot.

Dean, as Anthony's best friend I must say thank you. He talked about you all Sunday and made it quite clear that he wouldn't have made it without you!

You were out there pacing a few of us along with big Anthony. I really appreciated your relentlessly positive attitude. I have only now come to find out how accomplished you are, but the spirit you employed on behalf of Anthony (and the rest of us) is as impressive as what you performed in 2006.

I hope to see you July 31 in San Francisco>

Dane,
I had the pleasure of meeting you at the Expo for this beautiful race! I bought your book and finished it on the plane going back to KY. I talked to anyone that would listen to me on the plane about what an awesome book this is and your incredible journey. Lucky for me I was sitting next to a man that had been running marathons for 30years! He said he is getting your book when he returns home and more importantly donating to L'Arche. I just wanted to let you know that when you mentioned in your book that you hope to "inspire"...mission accomplished.