I learned long ago that milestones like this are rather arbitrary. It all depends on how you decide to count things. First of all, I ran the Green Bay Marathon in 2012 when they black flagged it in heat. I finished it, walking the last 5k as we were told it was canceled. Upon completion, I received a text message with my time. After some thought, I realized it shouldn't count as a marathon. In January, I ran the fastest marathon distance around a cruise ship ever recorded. But that didn't really count either. Yet both of those count or don't count because of a set of rules I decided upon. Then again, everything only counts based on a set of rules we decide upon, if you think about it. 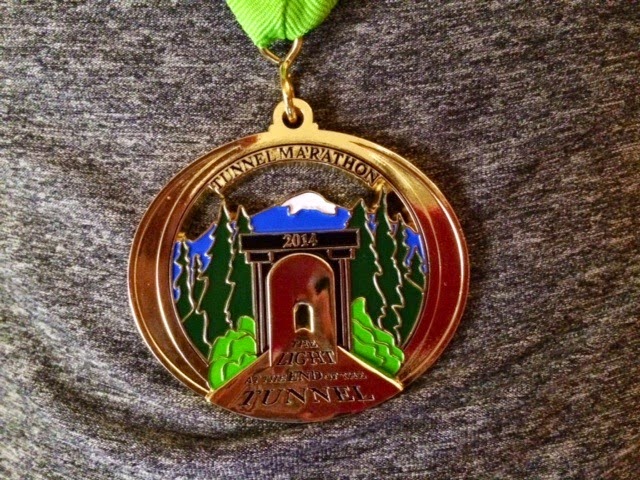 The Tunnel Lite Marathon was, however, not even going to be what I considered my 150th marathon.  That was going to be in two weeks in Huntsville, Utah. Then I partially tore my Achilles tendon about five weeks ago. The reason I chose the Huntsville Marathon was because I knew it would suit my strengths (downhill running) and was run partially on the same course I have set a personal best on twice previously. Go with what you are best at, right? But as I was planning on using Huntsville to set a new PR, which the torn Achilles threw out the window, I decided I needed at least a warm up race.  The Tunnel Lite Marathon popped into my head.

First and foremost, I love how the name of the race is "The" Tunnel Lite Marathon. Like how the band called "Eagles" does not have "The" in front of it but "The Edge" of the band U2 does. I can honestly tell you that kept my mind preoccupied for at least a mile yesterday as I ran this race.

Honestly, this won't be much of a recap of the event itself.  If you want to know more about this race, you can look at my Light at the End of the Tunnel Marathon recap here (notice there is no "The" at the start of its name.)  It is the exact same course just run at a different time of year.  The main difference between the two is that, historically, this race is cooler. It wasn't that much cooler for us this year but I am sure I will touch on that.

My goals for this race were to simply run as hard as I can and make sure the Achilles didn't injure more. Note well, if I had thought I would injure myself running this race, I never would have started. I can guarantee that virtually every one reading this does not have any race so important that they must injure themselves to start and/or finish it. I have zero problem not running or finishing a race if it will be detrimental to my health.  But I had a feeling I was good to go in this race. 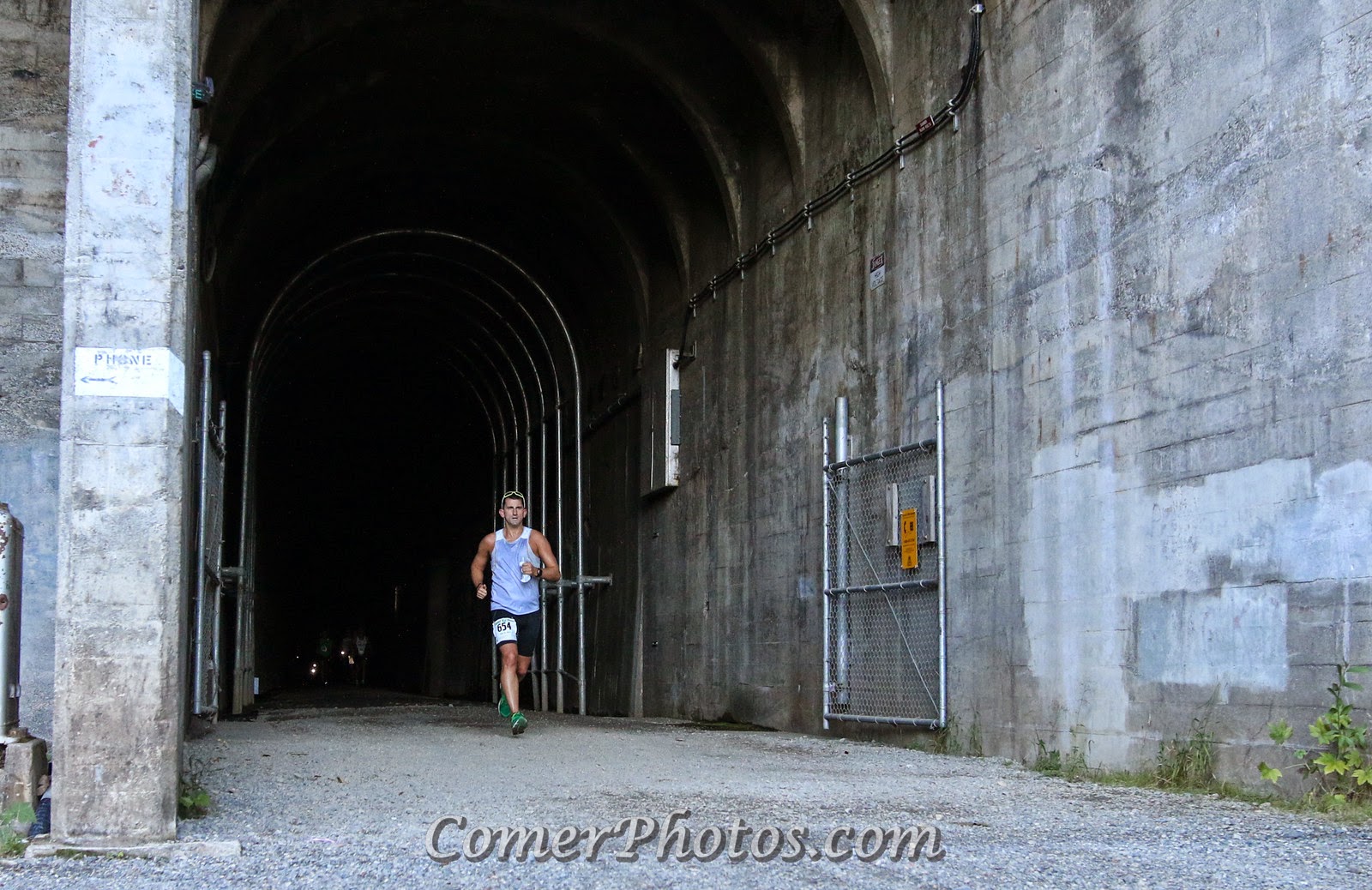 I hoped to get a Boston qualifier as my minimum time goal with an outside chance of going sub-3. Given I toed the line at the heaviest I have ever run a marathon (I don't know the exact weight but for it was much higher than ideal for a fast marathon attempt), I knew that might be tough. The cool 45 degree starting temperature before the tunnel was helpful. I had recently looked back at my race history and realized it had been about two straight years of racing for me where the temperature for the race was either at or higher than expected for that day of the year. I hate racing in the heat.

In addition, I have had a tough time with running in general lately.  I finished my 350 mile run up the Oregon Coast about two years ago.  My running after that was fine but slowish, as expected while I recovered. Then I crashed my bike in a training ride for the Boise 70.3.  Since then, my running has taken a nosedive. A litany of injuries, all seemingly stemming from that bike crash stymied progress. Only a new personal best in the Mt. Nebo half marathon (on a day when I could have easily chopped 3 more minutes if I was in actual good running shape) has been a shining moment in my running.  Since that crash I have only run 11 marathons and only 3 of those were Boston Qualifying times. Two of them were on this course. (Spoiler alert.) 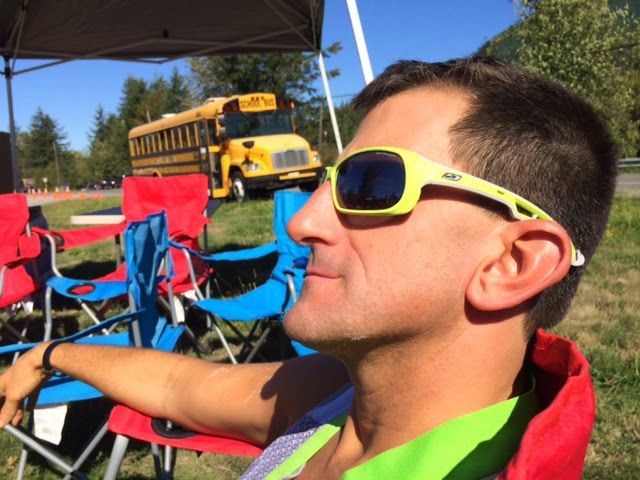 When I crossed the line in 7th place overall in a time of 3:06:58, I was quite happy. I achieved a Boston Qualifying time for the tenth straight year. The time was 17 minutes slower than my personal best but I had no major complaints. I hadn't run anything close to a long training run in three months. The weather, while cool at the start, came from a cloudless sky.  The course was mostly shaded but when it wasn't the sun beat down. In the last 6 or 7 miles, it was baking. I was covered in salt by the time I finished (thanks for the picture, sign and support, Shannon!)

This recap also won't be too much of a look back at the 150 marathons I have run, either. I did that for my first 100 in my second book and I am not quite ready for another retrospective. I also see this as the springboard to getting healthy, strong and fast (for me) again anyway. So I am looking forward, not back.  But I will look at some stats, as I do love them so.

First, 150 marathons is fine.  There are a fair number of  people have "completed" more marathons than that.  However, what I am most proud of is few people have run faster for 150 marathons or give as much effort into each and every one of them, especially at my size (6'1'' 180ish pounds.)
* For the 150 marathons I have run, I have averaged a 3:17:52.  That number includes two Leadville Marathons (5:17:41 and 4:45:30) as well as one Pikes Peak Marathon (6:41:53).  Those three marathons alone sway the entire average by two minutes and forty-eight seconds!
* Seventy-one of the 150 marathons have been Boston Qualifiers and that includes the first 38 in 2006 when I ran 52 in one year, which were not BQs.
* 132 of the 150 marathons have been under 3:30.  Most of the ones which have not were caused by ridiculous courses, illness or something completely out of my control.
* From 2007 to 2009, 31 of the 33 Marathons I ran were Boston Qualifiers. (Ended, not surprisingly, by another bike crash.)

All in all, the times are just fine to look at and I would happily bore you with details of every single race. But no one really cares in the grand scheme of things. I barely care. I like looking at numbers and playing with them. I like pushing my body and seeing what is possible. It has not been fun to run marathons the past few years because I haven't been close to the shape I know I can run them in. I totally understand why elite runners basically give up racing once they lose their top end speed.  If you could run a 2:10 marathon, running a 2:55 must feel simply awful. That is why I have so much respect for those pouring their heart into their 4, 5 and 6 hour marathon finishes. It is also why I absolutely don't get those who don't pour their heart into their finishes and jog along snapping pictures during a race. They are abusing or neglecting the gift they have which many wish they could. 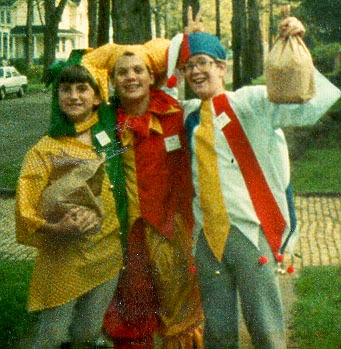 As I sit on the cusp of my next marathon, I have no idea if I will run 200 total let alone another 150. Ten years ago I was one month away from my third, and what I thought would be my last, marathon. Who knows what the future holds. All I know is that it will hold me giving all I have every day to be a better runner, person, and juggler.

I know I can juggle 6 balls if I put my mind to it.