This report begins with a heavy heart.  On the eve of the race, I found out a friend from high school, who I had unfortunately not seen in many years, passed away from cancer. Lisa MacDonald (Lee) was a track and cross country runner a year behind me in high school.  Always quick with a laugh and vibrant until the end, Lisa will be sorely missed by more people than I could even begin to count.  I decided to dedicate my run to Lisa - a small and basically worthless token but when faced with events out of your control you do what you can. 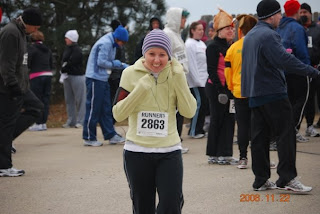 Lisa in a Turkey Trot back in 2008, with her ever-present smile.
Race Day:
After a rather sleepless night, bothered obviously by the lost of a friend, I woke with my alarm at 5 AM for my 6 AM race. I then promptly fell back asleep. I then woke up again at 5:55 AM. Oh my.  If I had not made the decision to run this race for Lisa I would have just stayed in bed.  However, that was not an option so as fast as probably humanly possible, I dressed and left my hotel room and subsequently the entire hotel by 6:01 AM.  I knew I had about a mile to run to the start of the race so I began hoofing it.  Praying the race would not begin on time I sped towards the timing mast at the Renaissance outdoor mall.  Upon getting to the area I could see I was too late.  Or was I?
Up ahead, runners gathered toward the finishline.  I saw the race Director, Mark Simpson and we made eye contact.  I shrugged and he quickly yelled into the walkie-talkie: "Hold on.  We have one more half marathoner!"  It turns out the people gathering were those running the 5k. Ugh.  With the 80 plus degree weather and 100% humidity, I was already completely soaked.  I jumped a bush, ran around the timing mat, turned around, crossed the mat and began my actual timed race.
First 5k: 6:55, 7:25, 6:42
I spent the first 3 miles of this race catching up to, weaving through and then passing as many people as I could.  Before reaching the third mile I could see the leaders coming back at us.  Well, I should say "leader" as the young guy leading the race was running all alone.
As the second mile marker was was off, I was hoping that further such markers would be more close to proper placement.  However, all I could really think about was how exhausted and sweaty I already was.

To the halfway: 7:13, 9:36, 5:12
As the course doubled back on itself and went up and down some winding hills, I expected some slight fluctuations in my time.  However, mile 5 was extremely far and mile 6 was very short.  A slight inconvenience for sure but one that plays on the mind of a weary runner.  The hundreds of runners I had passed was now become a runner here and there as the crowd thinned more and more.
To mile 10: 7:22, 7:37, 7:35
It is extremely difficult to rate a course like this on a day like this with all going on in my mind.  It was simply a brutally warm and humid day where all goals were thrown out the window.  I was beginning to feel a little bit better and have my pace even out but now the energy ebbed even more.  I thought of Lisa and felt a major twinge of sadness.  The morning sun was beating down from above and baking my skin.  I had forgotten to grab my sunglasses and was squinting in the blinding light.  "Hi Lisa." I thought.
To the finish: 8:05, 22:57
As the race reached its end, the miles seemed to get longer.  And as a quick rerouting of the course shows, they were.  I was a little disappointed to see that the race was much closer to 13.3 miles than the actual 13.1 distance.  to non-runners, .2 of a mile doesn't seem like a great deal.  but depending on your speed, you are looking at anywhere from 1.5 to 5 minutes of extra running.  I have a feeling this will be remedied in the future.
Getting into the last quarter-mile, I quickly thought back on the race.  As i have said, the weather was atrocious.  Some of the mile markers were off and the course was long.  However, the volunteers for this race were top-notch, the course direction allowed not a single person to take a wrong step and somehow all of the energy drinks were kept close to ice-cold in spite of the searing heat and humidity. In addition, there was a random drawing where five individual each won $1,000. What a great way to end the day for 5 different people!
I personally finished 12th overall with a time of 1:36:38  I hesitate enormously to use phrases like " I know Lisa was there helping me through a race" mostly because if there is an afterlife, I have a feeling she had much better things to do with people she was much closer with. However, as things got tough, my memory of Lisa spurred me on and really, that is all that matters.
Live your life the best you can.  As I have always said, there will come a day when you cannot do this.  Today is not that day.
Posted by Dane at 10:01 PM

I am sure that Lisa was smiling down on you today, Dane. She was probably right there, running with you!!

Thanks for sharing Dane! Thank you for also reminding me that I need to run or do whatever I would like to accomplish now because the day will come when I will not have the opportunity to do it.

I know how you hate humidity, Dane. Good job on the race, and pushing when it didn't feel good. I'm sorry about Lisa.

I'm so sorry about your friend, Dane. It's so very sad to lose someone so young...or anyone for that matter...to that dreadful disease. I had heard you had a late start, but you must have whooshed by me so fast, I never saw you. (BTW, my Garmin had the course at exactly 13.11 miles, and I promise I didn't take any shortcuts.)

Thank you all. It was a hard day for sure. but one hopefully done in a way to honor a friend.

Karen, I could be wrong about the race distance but I would never leave it up to current GPS products to prove me either right or wrong. If you ran 13.11 you must have cut the most perfect tangential route possible which even the leader of a race would find hard to do.

Dane, I ran the race as well, and I cannot remember another race where the weather conditions were so brutal. I was hoping to run 1:21ish and ended up running 1:26. As you said, on a day like that all time goals are out the window. I'm sorry for the loss of your friend...its times like those that make running seem small. Oh, and just for the record my Garmin had 13.24, I don't trust those things either.

Exactly my point. GPS data is rather suspect. On the other hand, I am pretty good at knowing my own pace, and I think I was right on for the distance and conditions. Just one person's POV.

Obviously this is one person's POV but if that is exactly your point, why cite a GPS as evidence for the course's accuracy in your original post?