Time and time again when I am asked for advice from newbie runners, after pointing them to the 400-page book sitting in front of me that I wrote so they could refer to said advice whenever they want, I tell them to realize how often running does not go the way you want it.  You do what you can to put yourself in the best position to have a good day on race day and hope that 10% chance of having a good day happens when you are racing.

My goal for this race was to run a solid 1:25ish for the half marathon. When the morning approached, I felt perhaps I could take advantage of the "optimum" conditions and run a solid 1:22 or so.  Then I ran the first lap.

But before I get to my race, let me set the stage for this indoor marathon. Three lanes of hard surface track surrounded the longest speed skating rink in the country. Longer, by two feet, than the rink I had run a four hour timed event to close out my 2011, it was indeed an interesting venue. Time and again I heard people tell me they would get bored or this would drive them out of their mind, even though they had never done anything similar to this. Sure, at first blush, perhaps some would equivocate running 47.5 laps as boring. To which I say, run harder and you will be more concerned with your lungs than your boredom.

The ice rink itself was kept a very nice 45 degrees or so, pretty perfect for racing. Or one would think. The surface was flat which again lends one to think it is perfect, but I would beg to differ on that. Fortunately, there was an additional lane added to the race as in previous years there were only two lanes for running.  Without a doubt, even three is not enough. That said, people during the race were relatively good with keeping lane one open only for passing, lane two for faster runners, and lane three for slower runners. But like closet space, you can never have too many lanes.

There were two bathrooms right on the west end of the track just a foot or so away from where we were running. This was an extremely nice touch. I never used them, however. There were also a plethora of volunteers there to hand you your water bottle on tables positioned right before the end of each lap. I also never drank a sip of water.

Laps were on display on a big screen TV right when you passed each lap and if you paid attention you could see what lap you were on and what the lap time was, even if a slew of runners passed over the mat at the same time. (See the picture on the right with me giving some mean side eye to the TV right off screen.) At the end of the straightaway of the first portion of each loop was a huge overhead display of constantly revolving list of runners.  Listed in order of place and also with the number of laps completed, I could count on seeing an update of myself about every two laps at my pace (I would learn later.)

All told, the event was very smoothly run. There was music played for the entirety of the race and an announcer with updates for some of the lead runners as well as when each runner hit five laps to go. Organization-wise I can't really think of anything that could have been done better. Kudos indeed to the race committee, volunteers and all involved.

This leads me to my race.

I positioned myself about three rows back of the three abreast (or so) runners figuring the top ten would be where I would finish.  Given the previous results this would have been relatively correct. However, on this day, there were going to be a slew of fast runners taking part.

There were two half marathons being run with those hoping to run faster times running the 7 a.m. race. I can say unequivocally that I was more than pleased that all 200 of us were not on the same track at the same time.

The clock counted down and away we went.

As lap after lap unfolded I simply could not catch my breath. There were a few chaps in front of me that I was staying right behind so if I was slowing, so were they. But that didn't help me with my breathing.

As I began the third mile I ran a slew of 1:52s and thought perhaps it was just me needing to get the feel for the track and how people would react to being passed. My biggest concern for the race was plowing into someone who inadvertently stepped out into the passing lane (my hand is still broken, by the way.) My second biggest concern was getting plowed into because, as I mentioned, some dudes were flying! (Top 5 guys all ran under 1:20 and the 6th guy missed by one second.)

Fortunately, almost every single person was staying where they needed to be. But I can definitely say the concern for getting run into adds a second or two per lap. Especially when you have a broken hand and every person you pass is on the side of the broken hand!

That string of faster loops did not, however, begat a sudden burst of speed. While by the fourth and fifth miles I was finally seeming to catch my breath, I was not picking up the pace at all. I more or less resigned to running a less than stellar time. Without a doubt, one of the worst things about long distance racing is realizing early on that the day is not yours and still needing to go through the motions for another hour (or two or seven.)

Instead, I decided to simply watch the other runners around me, including those passing me and those I passed. I was still giving all I had; just all I had wasn't very much. Suddenly, I ran off a stream of faster paced loops again. Also, with 6 miles to go, the leading runners had like three to go.That was beyond impressive. 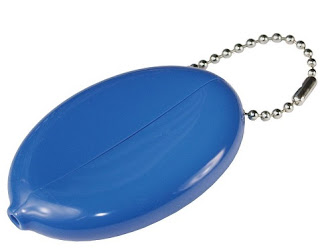 But just as quickly and without explanation that the fast loops happened, they went away. I felt as if I was pushing hard but there was no correlation to my time. Undoubtedly, there was some slowing from constantly bobbing and weaving around runners. But that alone couldn't account for the times I was running.

I almost had the disaster I dreaded around the 9th mile as a woman dropped something and decided to stop, turn around and pick it up, all without really looking behind her. Only my Baryshnikov-esque skills kept us from becoming a tangled mess.

What did she drop? A water bottle or gu packet?  Nope. An old-fashioned coin purse. You know, the plastic kind that were last made in 1897. Was she expecting to make a purchase in the middle of the race that required 37 cents? What would that purchase be? A postcard stamp?

After breathing easy for not decapitating a little lady, I actually laughed out loud. Yeah, that's going in the recap, I thought. 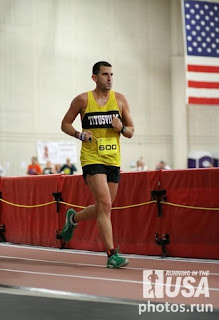 Throughout the race the lead woman was one lap behind me. Well, she was less than one lap but I never could tell how far.  Whenever I would pass under the big board of runners it would tell me she was always "Me Minus One." But I had a feeling that was probably just a few yards as most. As there was no one else that was that close I kept using that pursuer as my whip to keep me going when I wanted to stop.

A kick to my ego was when I inexplicably ran my first two minute lap.  his lap felt no slower than the 1:55 before it or 1:54 after it.  It really goes to say how much weaving in and out of people can slow one down each lap. Realize that 5 seconds per lap was almost 20 seconds per mile. If one were out on an outside course that amount of change would be easy to discern. Indoors, however, it is different. This was one thing I was quite cognizant of having done a few of these indoor races and wanted to make sure that I would not fall prey to it here. However, it happened and it fired me up.

Another fire under my shoes was when I hit five laps to go and was announced as such. Shortly there after, the announcer said the lead woman was on her final five as well. Throw in the fact that, if my math was correct, I was dangerously close to running over 1:30 and that was all the motivation I needed to pick up the pace.

My lifetime average for 87 half marathons is 1:30:14.  Those 14 seconds bug the heck out of me.  My friend Jay, a fellow lover of numbers, had figured out what I needed to run 1:28:28 in my next 13 halfs to get that average down below 90 minutes. I was not going to do that today but I was going to be damned if I added to it! (Plus, I wanted to pass my buddy David Andrews for a fifth time but just missed doing so. See, now you are in the recap!)

In the final five laps, what also helped was I knew that no one else would be passing me. Being able to, more or less, run unimpeded in lane one meant that I didn't have to juke and jive. As suspected, this made everything so much easier. I figured, even with the breathing problems and everything else being the same, if I had just ran this race solo I would have run the 1:26 I thought might be possible without much trouble. As I mentioned above, for some reason, in spite of sweating profusely, I didn't take a single drink of water. Part of that comes from the fact I couldn't breathe at first. Part was because I didn't want to have to grab a bottle full-stride among other runners. But, mostly, I wasn't thirsty.  It was an odd experience but it wasn't even until this final three miles that it hit me I hadn't imbibed.

When I it the final lap, I saw I had to run roughly a 1:50 to finish under 90 minutes. Not wanting to leave it to chance, I picked it up and ran my fastest lap of the day. Too bad I couldn't have done that for the previous 48. 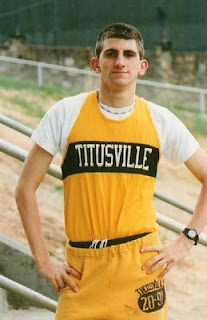 I finished in 1:29:57 which was good enough for 14th place overall. I stepped off the track and offered congrats to those who had finished and the lead woman who came in about half a minute after me. Then I bolted quickly for my hotel for a quick shower and change to come back and do another book signing. I was sad that I couldn't hang around but my singlet was drenched and beginning to freeze me. The singlet, by the way, was my high school track singlet. I am not sure what made me pull it out of the closet a few days before but I thought it would be fun.

Let's just say this polyester did not breathe very well at all. But I don't look that much worse in it today as I did 22 years ago. I dare say I look a touch better with no beaded necklace and white undershirt.