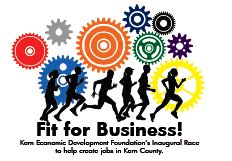 I was looking forward to being in Bakersfield for this Fit For Business 5k/10k race for quite some time, even if only to be in the town who played the villains in the fantastic 1980s movie Best of Times. Little did I know how much more than just Hollywood movie settings I would see in my short visit there.
The Fit for Business 5k/10k was the brainchild of the KernEconomic Development Foundation as part of two-day event to raise money for job-creating research and education in Kern County. This was the inaugural event for this race but fortunately, the KEDF had chosen a wonderful venue for the race –t he newly created The Park at River Walk. A 32-acre parcel of land adjacent to the Kern River, this park was rescued from urban development some years ago and, what was once an inaccessible piece of land located adjacent to the highway, it is now the city's greatest recreational feature.
Reclamation projects such as this, which open up land for runners and cyclists and other outdoor enthusiasts to enjoy what was once useless to them warm my heart.  To see one such as this which run right next to a river, makes me even happier.  Prior to the expo, I had a few hours to kill so I decided to go on a quick exploration trip.  Following the Kern River inland I saw it spilled out of the man-made reservoir called Isabella Lake. I love checking out big bodies of water so off on I went. Little did I know that on my way to the lake, the pleasant and calm Kern River would turn into a whitewater rafters' delight!  When I got to the lake itself, I was even more pleased to see people out boating, skiing and enjoying a beautiful day. I can see why this is such a tourist attraction.
Quickly heading back into town, I got ready for the packet pickup and to do a meet and great with those who were picking up their packets.  These smaller events always allow me to spend more individual time with each person and hearing their stories always inspires me. Listening to children tell me what they hope to achieve (running-related and non) with such wide eyes and optimism even removes the cynicism of the most grumpy part of me.
After the packet pickup I enjoyed the most delicious Top Sirloin steak dinner with members of the KEDF at the unique KC’s Steakhouse in downtown Bakersfield. Conversation went swiftly by as we discussed the historic nature of Bakersfield and how it has ties, in some respects, to my hometown in Titusville, PA (Hint: Oil.) Soon it was time to part and ready for bed.


Race Morning:
I arrived at The Park at River Walk with the sun just breaking through some early morning haze to see a bustling arena of runners, volunteers and workers tying up loose ends and handing out packets to late-comers. I was asked to give a few words of encouragement to the runners by the emcee host, Peter Wonderly (an awesome name if I have ever heard one.) It wasn’t hard to do given how many cool things I had seen in the town already in just 24 hours and soon we were lining up for the start.


First 1.5 miles:
The race start was divided into both the 5k and 10k with the 5k runners simply turning around half way less on the bike path we were running than the 10kers. While the vast majority of the people participating in the race were there either to do their first race ever, or just trying to regain some lost fitness, there were undoubtedly athletes in both races that can haul.  More on that later. The race did not have any mile markers but with a turnaround at 1.5 miles and then again at 3.1, one didn’t really need them. Prior to the gun roaring, too slight youthful chaps appeared out of thin air and positioned themselves in front of the pack.  I asked what race they were running and made a silent prayer it was the 5k.  Both said the race I did not want them to say and I more or less conceded defeat right there.  And to be honest, my concession wouldn’t have mattered anyway.
With the race underway, the two blonde haired high-schoolers soon left me as a distance memory.  In between them and me was another slightly built runner. With an Ironman tattoo on his calf I had a feeling this runner (Diego) was out in front for a reason. I watched the high-schoolers quickly (and I mean quickly) disappear but tried to hang onto Diego as much as I could.  My body simply does not like how a 10k feels and running that fast is almost a revolt against all my sense.  But I passed through the first 1.55 miles in 8:53, just a little behind Diego.
To the turnaround:
With a 5k I know it is going to hurt. I can simply go into oxygen debt and have the pain be over in like 17 minutes.  With this 10k, I had no idea how to run. It was already hurting and I was only nearing the halfway point. To make matters worse, I had lost immediate “touch” with Diego and he was pulling away. Nevertheless, I was thoroughly enjoying myself, checking out the Kern River to my right and watching some of the other non-racing pedestrians out enjoying the day as well.  I always wonder if people who run at or on a race course on the day of a race feel a little like they are intruding. Moreover, do they feel envious that they too do not have a bib number on and are getting some “credit” for their exercise?
I slapped hands with the lead runner both to congratulate him on his stellar speed as he passed me on his way back and hoping on the odd chance my 180 lb frame might somehow slow down his 120lb frame.  No such luck.  I hit the halfway turn at 18:25.  That was a shocking surprise in a good way for me..


To mile 4.5
Unfortunately, turning around meant turning into the teeth of the wind this morning.  Some of it was a cross breeze but undoubtedly we now had the vast majority of the breeze to contend with n the way back. I was really hoping to equal my time out on my time back and surprisingly run a minute-plus personal best on a day I had not even been thinking about running a personal best. Diego had really been able to put distance between him and me so now I was running against nothing but the clock.
Approaching the 4.5 mile mark I had already been able to say good morning and great job to all the other 10k participants and now it was time to catch the tail end of the 5kers as well to urge them along. I missed my exact split but I could tell I was slowing.  This last 1.55 was going to have to hurt to get a new personal best.
To the finish:
For followers of my blog, my making a Liberty Park reference is nothing new. For those new here, Liberty Park is the park across the street from my home where I have logged literally hundreds upon hundreds of miles around a 1.5 mile loop.  It is safe, convenient and gorgeous.  It has also provided me with an easy yardstick when I get tired in races.  Here, with only 1.55 miles to go, I only had to do the equivalent of one loop of Liberty Park.  I can make that hurt for just one LPL (Liberty Park Loop), right?
Pushing with all I had, the wind began pushing back. I soon had the finish in sight and saw that rude clock counting far too fast for my comfort.  With one final burst I was able to cross the finish in fourth place overall in the time of 37:45 – a new personal best by 11 seconds. This could not have come as more of a surprise.  I am simply not in the shape to best my 10k, especially on a windy day.  But that is why we show up.  As I have always said, you don’t know what will happen at the finish line unless you get to the starting line.
The winner of this race, high school junior Cameron Miller, absolutely torched the course, winning in a time of 31:53. Not all that far behind him was sophomore Connor Fisher in 33:49. Wow.  Diego would take third in 36:07.  What a stellar top three for a first year race on a lazy May morning in Bakersfield.
Fantastic raffles were then held as were wonderful prizes for top age group winners.  I got to meet even more people than the night before and spend a plethora of time with people who were very proud of Bakersfield, a city that sometimes can feel a little neglected in the state of Los Angeles, San Francisco and all points in between. But as I told everyone there that morning, this race and this city has as much potential as any other out there.
I look forward to watching them both grow!
Posted by Dane at 10:34 AM

GREAT JOB! Congrats on the PR!