I finished the St. Jude Half Marathon a few weeks ago and figured my racing for 2012 was over.  It has been a rough year and I was ready to take December in stride. Then I went to Los Angeles to run the course for the 13.1 Marathon there and stupidly ran into a fire hydrant.  This sounds comical if it wasn't so freaking painful.  Then again, it is still comical as nothing serious happened to me.  At the time I felt like I had been shot and I did leave a sizable contusion.  In fact, I did get one of the largest bruises I have ever had in my life.  Three days after that I got the flu and there was just no way i was going to do much else in 2012. 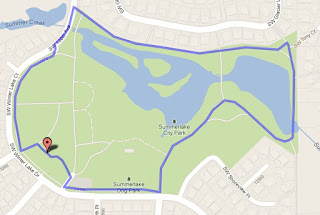 Of course, I remembered I had signed up for the Operation Jack Northwest Run to be held here in the greater Portland area on December 22nd.  Done mainly to help my friend Sam Felsenfeld with his cause of fighting autism, I thought I might go run a fast half marathon or so and call it a day.  The race format is one of a 6 hour run around a .95 mile loop.  You can run as far as you want in the time frame.  This is not the first time I have done something like this and these sort of races actually favor me. (I still hold the record of the furthest distance ever run at the Presque Isle Endurance Classic - a 12 hour event where I covered 84 miles.)  but this was not the day to run for six hour or to try and run fast for 13.1.  Instead I figured I would run a nice tempo run for 20 miles and call it a day. 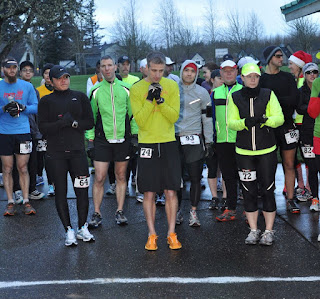 I have been aching for a little wintery weather lately, as I do enjoy a run in some soft white stuff.  However, I have been bringing sunshine with me everywhere I go lately.  Even a trip home to visit my mother in NW PA brought upper 40 degree weather and not one hint of snow - very odd for this time of year. I was hoping for something like that on this run but the weather forecast for the race called for mixed drizzle. If you know the topography and weather patterns of Portland you know it could easily be raining in Portland proper but cross over the hills that separate it to the west and just a few miles away it is very different.

Arriving at Summerlake City Park just few minutes before the start, me and my good friend Shannon found a parking right where the race started, grabbed our bib numbers, got in line for a last minute potty break and got ready to go.  It was a little chilly but no signs of rain made us quite happy. We lined up while the director, Steve, gave us last minute instructions and ready for a fun day of running camaraderie.

Then we were off. 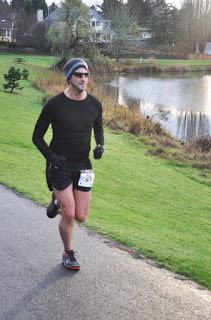 Before even a half of a lap was completed, a few runners separated themselves from the pack. With a race of this nature, you sometimes have no idea what person is doing what sort of distance.  So you really need to settle into your own pace and ignore everyone else. I saw one guy take off in a mustard color shirt (you can see him in the picture above) and I figured he was either here to crush the course record or was running a fast half. He was bother to me.  I wasn't going to do either of those. All I wanted to do was run nice even 7:30 miles or so, knock out 20 miles under 2.5 hours and go relax for the rest of the day.  I had to go watch the Nutcracker later that evening - I couldn't be too tired.

The course was open to the general public and more than a few people were out exercising or walking their dogs.  In fact, most did their absolute best to stay out of the way which was appreciated. After about 5 loops or so, I had passed the vast majority of runners but hadn't seen the mustard color-ed shirt guy yet. I assumed he would be passing me soon at the pace he was running.  Right after the 8th lap, sure enough, he came flying by.  We talked for a second but he was soon gone.  He looked vaguely familiar so I figured I would find out who he was later. 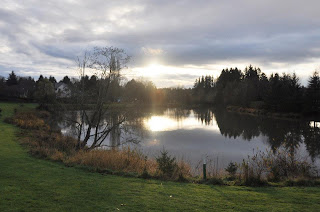 With a course of this nature, aid available every mile or so, you can actually forget to drink.  Since I had already had to stop on the 7th lap to use the bathroom I felt I was more than hydrated. However, around the 12th lap I realized I hadn't drank an ounce of fluid and decided to stop and guzzle a cup. I was already looking forward to doing the next 9 loops and calling it a day. Around here the decent weather became even better and the sun started to peak out and warm up the runners. This was a surprise indeed.

I was really beginning to get to know some runners' strides and even if they weren't wearing tell-tale colors would have been able to pick them out of a crowd.  I found it perplexing that a group of runners felt the need to run three abreast around the loop even though the paved section wasn't much wider than 6 feet. Seemingly seasoned runners, one would think they would know basic running etiquette. That's what one gets for assuming!

With just a few laps to go I saw I was catching mustard-colored shirt guy.  I felt for sure he would have passed me by now but he appeared to be slowing.  With just a little over a lap to go until my day was done, I drew up beside him. As we talked I realized who he was.  His name is Zach Gingerich and he is simply one of the best ultrarunners in the nation.  Having already won Badwater in 2010, he has a slew of other jaw-dropping performances. When I did the 50 mile race at Umstead in 2010, he blistered a 13:23 on the 100 mile course. Ridiculous. He had just moved to Oregon recently and apparently lived just down the road. He would go on to break the course record for this race later on but right now we were just two runners enjoying a brisk pace. We said we would get together for a run someday but I hope he wants to keep it under 40 miles.

Wrapping up my day I slid in under 3.5 hours with a tidy 2:29:04 and not a moment too soon.  Almost immediately after I was done, the sky clouded over and the mist and drizzle began anew. Shannon mentioned she wanted to get in a few more laps before she too called it a day. Once she had, we packed it up and were on our way.  It was great to see so many people out not only exercising but raising money for Operation Jack. I heard a few people ran their first ever marathon and a few others were tackling their first distance run of any sort.  This is the type of news that warms the heart of someone who is trying their best to get as many people active as possible. 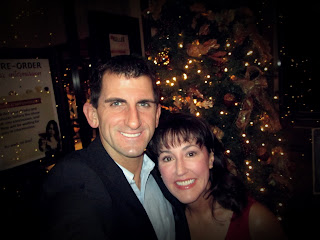 A short trip home, a warm shower and a nap and soon I was ready to see Tchaikovsky's masterpiece.  It was nice to put on some clothes that don't wick for a change.