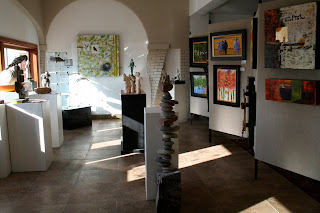 I vacillated in my decision on which race to run this weekend in Grand Valley and ultimately made the right choice. However, even as I was signing books at the packet pickup (held at an exquisitely charming art studio called the Twisted Brick Studio) I could not tell if I made the right decision.

It is funny how peer pressure and even joking "Come on! Do the full!" can make one almost waver in their choice. However, I knew I was no where near ready to run a marathon (at least at a good pace) yet. The question remained whether I could even run a fast half-marathon. In spite of those who said a half would be simple now compared to a 202 miler (I mean, it would be if I was running a relaxed pace) when you run shorter distances you have to run faster. Or you should, anyway. That was I why curious what I could do after months and months of prepping my body for loooooong, slow distance.

The marathon started half an hour before the half.  I arrived just as they fired the starting gun and saw my friend Sam Felsenfeld who I hadn't seen since Pasadena. Sam, as I have mentioned, is attempting to run 60 marathons this year for his Operation Jack cause. I sprinted ahead and caught up to him and wished him good luck. I told him I was running the half and he asked me if it started as the same time as the full. After I told him I had another half an hour he told me he knew he would see me here. I asked why and he said: "It is my 52nd lifetime marathon. You had to be here." (I am telling you - the number 52 is everywhere and Sam knows it. Case in point, my receipt for my Taco Bell the day before the race had me as order # 252.)

A few more steps later and a nice swat on the ass for Sam and I stopped running. Enough of that.  Time to go get back in the car and warm up. The wind was atrocious! I did not get a chance to snap a picture of the "Gusty Winds Possible" sign heading into Palisade but I have a feeling they are ever-present. Oh well. Everyone has to race the same weather!


I had pegged a few runners as potential top three placers and when we first started, the one who I had most felt would be upfront was indeed there leading the way. I tucked in behind him and followed the police car heading out of town. The wind was fierce and not actually too cold but rather just standing you straight up. I could not hear a single person behind me because of the din so I knew the leader couldn't hear me. No matter as we hit the second mile and he had already opened up a 30 second lead. I was working far too hard for the mile splits I was getting so I figured that my hopes of delivering a Mother's Day win for my mom were going down the drain. As we turned away from the direction we had been running to do miles 3 and 4, the wind was either at our backs or blocked by the mesa (and this mesa could do that as it is the biggest mesa in the world!)


I had closed the gap between me and the leader and thought perhaps I could make a late race surge.  Just stay in contact, I told myself, and give it all you have later. 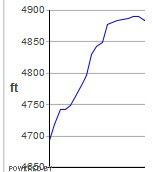 
I actually took a five second walk break about halfway up. I was crawling and sucking wind. Tough stuff.  Luckily, I could see everyone else was doing the same thing.

Cresting at 4,900 feet above sea level I most assuredly was not enjoying running up this beast. However, my mile split wasn't too bad and then the next mile felt even better. Perhaps I was in my usual "Don't even wake up until mile 6" routine.

As the leader reached the turn-around and headed back towards me I had again gained ground. With vineyards to our left and the town of Palisade down in the valley, I was enjoying a beautiful view. My mile split was a little askew here because it went from mile markers to "miles left" - a thing the Mammoth Marathon people do to get rid of that pesky .1 or .2 at the end of the race.  However, what was more surprising when I turned was that there were none of the runners who had been behind me previously. But another runner had closed the gap considerably and was nipping at my heels.


After hitting the turnaround I could not only see how close he was but I was also running full tilt into the teeth of the wind. It just began to sap me. When the previous third place runner passed me around mile 7.5, I felt deflated. I hoped to just keep him in sight and use the downhill as best as I could to see if I could reel him in later.

Getting to see the runners I had met the day before who were on their way out on the out and back course was a nice distraction from how tired I was feeling. Possessing a good memory, I am always able to surprise people when I remember their name. Sometimes when they are wearing sunglasses, a hat and are head to toe in runner gear I find them harder to place but I am usually pretty good with that stuff. I have always said that, as a whole, runners are just some of the best people I have ever been around. This continues to hold true to this day.

When I did get the downhill, I was able to narrow the distance between myself and second place runner but could see first place was nearly untouchable. He was way too good for me today and I was way too tired. I had to allow myself to be tired having just run 202 miles. Allowing ourselves to rest and recover from races is something we don't do as much in this world of constantly showing each other our race medals for bragging rights.

After leaving the hill, the next two miles were once again into the nasty wind. Any ground I gained on second place was lost and now I was just content to run out the clock. Without a doubt, I was not only conditioning myself for this 202 for quite sometime but I was also, in spite of how good I felt relatively speaking, was feeling the rigors of my ultra just two weeks prior.  Regardless, could someone please turn off the damn wind machine!?

I felt a little better when we turned on the back stretch home and my last two miles were more respectable.  I do not think I could have run much faster if I wanted to but if I was paying attention to my overall time I would have tried to slip in under 1:30. Instead, I finished third overall (with Jason and Billy taking first and second in stellar times- I think 1:24 and 1:28) with a time of 1:30:14 (I think.) 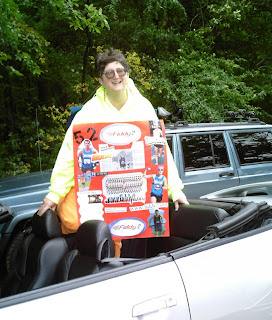 The race overall had more than doubled its total numbers from the year before which is wonderful to hear. I was a little disappointed that the usually wonderful awards the Mammoth Marathon people gave for top prizes (sandblasted stone) were not part of the takeaway this year. Hopefully next year and beyond they will be now that the race has become much more popular. These guys put on some nice races. No real frills per se and sure there are some tweaks here and there that would make them a little better. But for what you pay, every race I have done from the Mammoth Marathon guys has been top notch.

I didn't get the victory I had hoped for but my Mom said she was more than happy with a 3rd place overall. I am sure I could have finished 3rd from last and if I returned healthy my Mom would have been happy.

She is a fantastic lady and I am so happy she is my Mom.  You rock, Mom.  Happy Mother's Day!

Wow, I didn't realize it was only 3/10 of a mile up that hill. No wonder it was so miserable. Impressed with a 1:30 on that course in those conditions. Not a PR course or a PR day.

I ran the full. I agree Mammoth does a pretty good job for a small race. I ran Mesquite in Nov. and loved it. The wind was killer. Great job on the 1:30!

Nice to read the race report from my male counterpart. I was 3rd OA woman in the 1/2 - not the nicest of courses but it made me want to work that much harder. You're right Mammoth puts on great races - I did Little Grand Canyon last September. Perhaps I'll see you at another Mammoth race! Happy Running!