No one finished the Boise 70.3.  Now, I don't feel bad about not being able to compete. 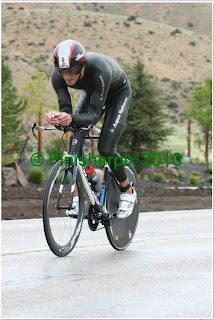 I am, of course, playing with words here a bit but given the horrific weather at the start of the Boise 70.3, race officials decided to shorten the bike ride from 56 miles to a mere 15 miles. That made the triathlon a 1.2 mile swim, 15 mile bike, and 13.1 mile run.  Or in other words, my current dream triathlon. Arrgh!

Weather conditions at the start of the race had temperatures in the low 40s, winds up to 40 mph and cold bone-chilling rain. After some of the elites got out of the water, the elected to keep their wetsuits on rather than deal with the freezing temperatures.

But I am getting a little ahead of myself. 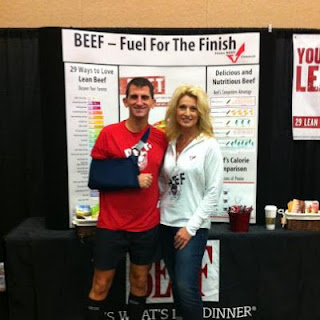 For me, this was the second straight year I was working with the Idaho Beef Council at the Boise 70.3 weekend. In a sling for most of the weekend (I say "most" because it is hard to shake hands, sign autographs and more or less do everything i need to do completely encased in a sling) it was bittersweet indeed.  This was supposed to be the race that kicked off my tri-season for the foreseeable future. But life intervened and I ended up with four broken bones in my shoulder and all sorts of unpronounceable things being ripped to shreds following a wreck on my bike. So instead I was resigned to the fact that this would be one of the few races where I was solely a spectator. 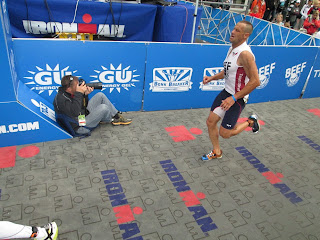 The nice thing about that was that I really got to spend time around the other competitors - taking pictures, chatting and checking out the behind-the-scenes events near the finish. Over 100 members of Team Beef were signed up to compete and many were fantastic athletes. even without a hurt wing I would have been hard pressed to give some of these fellow Team Beef members a run for the money for fastest finish.But that was what made this weekend so wonderful.  Seeing like-minded individuals who knew what fueled their body properly, pushing their own boundaries.

All members of Team Beef were also in the drawing for a Timex gift packaged generously donated to Idaho Beef Council including, amongst other things, a Timex Run Trainer, T-shirts and visors. If I did not already possess one of these great training tools I would have been even more upset I wasn't competing.A special thanks indeed to Timex for making two male and two female competitors very fortunate that day. 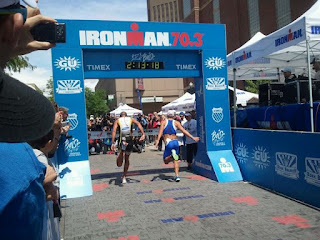 And what a day it was. In what will be remembered as the short 70.3 by many, even more will remember the unbelievable finish, in which Matty Reed and Callum Millward tied in what was one of the most unbelievable finishes in Ironman history (check the video here.) I was on-hand to witness and you can actually see my head and camera in this shot used on the Ironman website! Without a doubt if the Ironman people are smart, they will have not only a wider finishling for future events but also install a finishline camera so they don't have to rely on spectators with quick fingers to help them decide the winners.  (I do not think it was a tie but that is another matter.)

Now my goal is to heal this shoulder as quickly as possible and ready myself for a lot of exciting changes in my life. My eyes are on the prize at the Vikingman 70.3 in August and now I just have to get my feet in the pedals and my body in the pool.
Posted by Dane at 3:17 AM