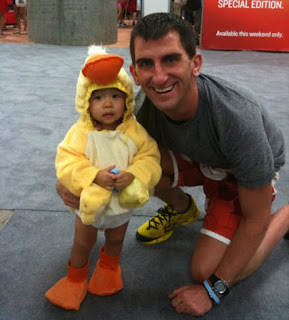 A week after running the slowest first mile ever in a marathon, I went even slower. Partially because I wanted to be going slow and partially because the utter lack of coral systems meant the mass amount of Japanese runners who had no care whatsoever about proper placement had plenty of runners in places where they shouldn't be, I spent the first few miles picking and dodging my way past thousands of runners. No matter. Slow was good. Controlled pace. There is no race today, only a training run.

The weird thing about a race which as 20,000 runners but has patches of zero to just a few spectators is that you feel more alone than if you were running alone in the woods.  Sure the race started at 5 AM and no one in their right mind would be up at that hour other than us runners pushing our boundaries.  But the stark contrast between being surrounded by sweating, silent masses but running virtually alone is quite odd.  Do not get me wrong, there were plenty of spectators in certain points and a variety of noise all over the course, even if it was not in a language understandable to every runner (the Japanese cherring English speakers and vice versa) but it was eerie nonetheless.

Running a pace I was rather unfamiliar with, and already sweating by mile 1, I wondered how the day would go.  The weather was remarkably good for Hawaii so I was counting that as a blessing. But as we approached the first 10k, my belly was already rumbling and I needed to make a pitstop.  The question of the day was whether I would be able to take in the fluids necessary to move forward as a runner who handles heat poorly but balance against a stomach that was voicing its displeasure just 25% through the run.


Exiting the loo, I was next to a other Caucasian runner, without a doubt in the minority in this race.  Chancing he spoke English I said: “We shouldn't even be awake right now, let alone at the 10k mark.” The runner, named Mike, agreed. I followed my initial statement up with a question of Mike’s goal time and upon hearing it was his first marathon, I offered a few words of advice.  Soon thereafter, hitting the biggest hill of the course around mile 8, Mike and I parted.

Off to the right, in the pitch black, the Pacific crashed into the beach down below Diamond Head. I thought of my mother, who has never seen this ocean and wished I could have sent my vision back to her.  An extraordinarily tanned and well-muscled runner squished next to me in his Croc sandals.  A fashion footwear that has to rank as one of the ugliest things I have ever seen, I couldn’t believe that he was running at all in these things, let alone a marathon, let alone (again) at a 3:20 pace. 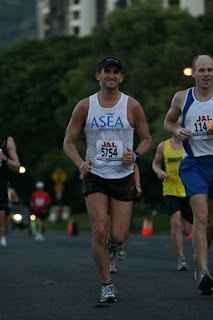 As the next few miles passed, and the crescent moon in front of use began to fade in the ever-increasing daybreak, we began running on the out and back section that would allow us to see how ferociously our asses were being handed to us by the hopeful winners of the race.  Like magic, Mike appeared by my side and fell into lockstep with me.  I told him he was looking great and meant it.


Right before the halfway point, the lead runners a ridiculous 6 miles in front of us already came zooming by.  To keep Mike’s mind off the potential thought process of how far ahead of us they really were, I pointed out that in just three miles we too would be heading back towards the masses.


Run with someone and you learn a great deal about them.  You can pretty much figure out within 100 yards whether you want to run another 100 yards with them, not to say anything about a few more miles.  I liked Mike.  He seemed like a good chap, had a wonderful attitude and applauded not only the winners as they passed us previously but also those who would be finishing an hour behind us on our way back. 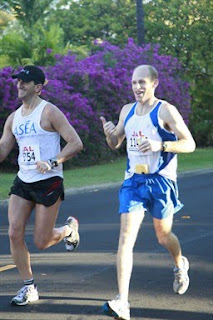 Passing mile 16, Mike commented that this was now officially the furthest he had ever run in his life.  I congratulated him on setting a new personal best with every footstep and let him in on my secret patented way of dealing with the last half of a marathon.


The sun was now at our back and hordes of runners began streaming by in the opposite direction. Shouts of encouragement from more than a few English speaking runners who I had met from the previous four days of signing books as well as lots of exclamations and finger-pointing from the Japanese runners, prompted Mike to give me a look and state: “Who are you?” Just a runner, Mike. Now concentrate on mile 20.


Having stayed with my friend Tom Craven near the final 10k of the race, I was very aware of what the last few miles had in store for us.  I also knew that if I wanted to hit a 3:20 marathon, I also had to slow down.  I told Mike that was my goal and he was welcome to go on ahead. Mike said I had gotten him this far so he wished to stay with me.  Nice guy.  It is hard enough to run your first marathon, but even tougher still to slow down when you simply wished to be done. 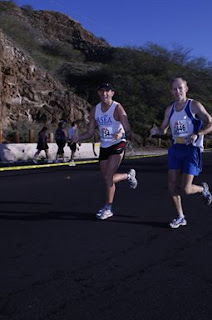 At the alternating mile aid stations we would walk through, drinking as much as necessary to stay properly fueled.  With the sun fully shining, but the temps still pretty low, we wanted to make sure there would be no bonking.   Even as Mike would mention a tiring of the legs or a desire to be done, I could tell he had a much faster time in him.  He was far from pushing it as we were still maintaining an easy conversation.  Cresting the other side of Diamond Head after mile 24, the Pacific once again beckoned with surfers already well into their day of hanging ten.  We shared in the spirit.


An absolutely gorgeous day awaited us.  As we neared the finish at Kapiolani Park, I began to tell Michael to enjoy every last inch of this first marathon.  So many runners push through their first undertrained and barely finish (e.g., me) and would rather forget the experience then repeat it.  As he was feeling so good I wanted to make sure that he was enjoying every second.  With a smile on his face we entered the finisher's chute.  My friends Wendy and Adam, representatives of ASEA who I had shared a booth with at the expo for four days and who had made this entire trip possible, were on hand to cheer me on and take some pictures.  "Right on schedule!" Adam yelled as he could see I was about to run a 3:20. 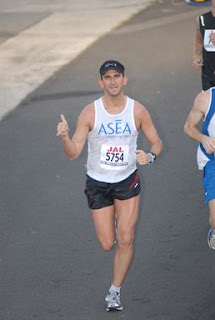 And 3:20 I did.  While I knew Michael had to have started behind me and would have a faster chiptime anyway, I stepped back to let him get his picture all by himself.  I forgot to tell him not to look down at his watch at the finishline so he could have a clear picture of  his smiling face at the end.  But I think they snapped the picture before he looked.  Either way, I had my 3:20:14 and because, as I suspected, Michael started behind me, a 3:19:56 was his.  Fantastic!


I posed for a few pictures and reveled in the day. One can never be too unhappy when the smiling sun shines on your face in Hawaii. 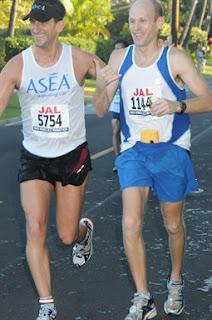 My host, Tom, just missed going under four hours when a cramp at mile 23 reduced him to coming to a complete stop to work it out.  However, his 4:00:12 finishing time was nonetheless a great time, especially for a 64 year old man!And now the planning begins for 2010.  Attempts at setting a new Marathon PR will be few and far between as the miles begin to add up and the ultras I have plan loom.  However, the inspiration I get from so many runners at all of these races will keep my own fires burning as I listen to their tales of racing excitement, even while I plan my own.

Twas a good year for my marathons.
Posted by Dane at 12:05 PM

Congratulations on another amazing 26.2 miles.

This marathon is on my list for 2010 and your take on the events start is exactly the same as everyone I know who has run this marathon.

Let's hope that the Director adds corrals for next year (although I have my doubts).

We local runners would appreciate corrals also, but I think they don't want to bother explaining the system to 15000 Japanese runners. This is no place for a PR anyway.

tortuga!
man, it is cold outside.

It is enjoyable, especially if you lower your time goals.

With my limited experience in marathons in Asia I think that might be an impossibility for sure. Corrals are non-existent.

We brought some of the heat back with us. Everyone should thank us.