If I didn’t recall one or two marathons where I spent more time doing it, this would be the Marathon of Bathroom Breaks.  However, the Kansas City Marathon will still be in the top three, regardless.  But don’t worry, there is more to talk about than my gastro-intestinal issues.

With the short week following the Wichita Marathon on Sunday, the Saturday running of the KC Marathon gave me a chance to see how well my recovery, following months of being exhausted from my 202 miler in April, was progressing.  At the marathon expo I was given the pleasure of addressing runners as one of the featured speakers. The question of how I recover so quickly from marathon to marathon was one topic on the mind of many of those in attendance.  As I was working with the Kansas Beef Council and sporting my “Real Men Eat Beef” t-shirt, I can see why my particular eating habits were a hot topic. 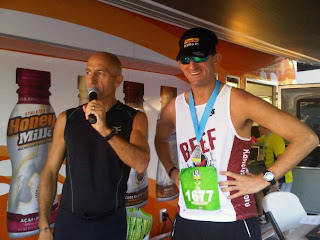 While I made it clear that if I knew the exact reason why I am able to do what I can do I would bottle it and sell it, I said that I can tell them what I do and they can make their own conclusions.  As many people desire to eschew scientific studies and facts presented to them in favor of real-life testimonies, speaking about my own revelations is something many take very seriously.  Fortunately, love it or hate it, I pull few punches, regardless of the audience I am speaking to and shoot rather straight. So when I told those in attendance I can, whenever possible, get healthful lean beef into my diet, even the night prior to my races, a few eyebrows were raised.

Unfortunately, due to the lateness of the expo and my commitments to it, I had no chance to partake in my usual beef-loading and had to partake in the pasta dinner, hastily eaten in between signing books at the Beef Council’s booth.  No problem.  Pasta rocks too.  I then spent some time with a good friend after the expo, watched a little TV, and got to bed at a decent time (for me at least) of 1:30 AM.  Soon it would be time for my 120th Marathon to begin.

Race:
My desired plan for this race was to shoot in the 3:10-3:15 range depending on how I felt as I try to race my way back into marathoning shape.  I knew the course was a challenging one with early hills, hills in the middle and hills at the end.  So, I would simply see what the course would give me.  Toeing the line prior to the start, I thought for a second about 2006.  How in the heck I was able to do one of these freaking things every single weekend for one full year is definitely beyond me.

I had seen from the course profile that there were a few hills of note to contend with during the first few miles. I just wanted to stay in a nice comfortable range and maybe run in the mid to high 3:0X range.  After gutting through the first couple of hills, I could tell I was going to need to use the restroom very soon.  However, every time I remembered that the bathrooms were stationed at the aid stations, I was past the bathroom.  Like placing aid stations right at mile markers, bathrooms should not be tucked in behind tables of liquid.  Makes it hard for a already addled-brain (I mean we are running a marathon) to choose which of the two they want right at that moment.  Although, I do appreciate the fact that the race had them in the first place. That is a very nice touch.


I spent the last few miles before the half-marathoners turned off on their own course running with a first year med-student named Laine. Running the half-marathon she would ended up taking 15th place overall in a tune-up for the Route 66 Marathon in November.  I said I might join her as someone on the planning committee has spoken to me about joining the race when I was in Wichita but I was unsure if it would pan out in time.  When I finally spotted a bathroom long enough in advance to make the decision to make the stop, I had to part ways with Laine.  I would keep her in sight for the next mile or so after I emerged from the bathroom and used her pace to get me back into the position I had been prior.

However, about 2 miles later, the urge to use the bathroom struck again.  This time, as we were running on a street filled with construction equipment, gravel on the roads and no one around, I didn't wait for a bathroom to present itself and quickly found myself running again.  A few more miles later and an urge forced another stop. This was getting to be a little ridiculous. When I exited the bathroom the 3:10 group passed me for the first time of the day.  The pace groups for this particular race were not running even paces but rather an even effort.  Running that way mans that on the hills they were either slow down or speed up accordingly.  While it works in theory, I was shocked how greatly they varied.  For instance, the 3:00 pace group went through the first mile in 7:22 when a 6:52 is needed for a sub-3.  It took sub-3 pace group 8 miles to pass me (and I heard they came in at 3:03- not good.)

The last and biggest hill of the race was right before the halfway point.  Running through some gorgeous homes which I will never be able to afford, I took my mind off of the climb but trying to think what actual work people who lived there could do to pay them so much.  How does a teacher make $32,000 a year but some job I have no idea how it contributes to the world afford someone to own a 8-bedroom mansion for a couple and their one child?  Not begrudging this person's right to make a dime but man that's a lot of dimes! 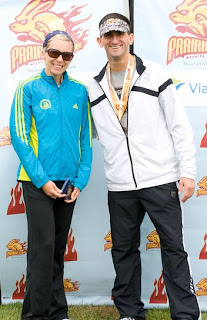 I decided to spend as much time right behind the 3:10 group as possible.  I was feeling a little in the stomach and the 3:15 I thought I was going to run looked more and more like a potential 3:10ish.  Plus I wanted to see how up and down the miles would be by the pace group.  I also noticed that somewhere along the line one pacer handed off to the other.  Probably a more effective way to make sure that the pacers are fresh but I would find it hard not to continue on with those I had led to the half-way point or beyond.

With a relay going on in the race, rarely were runners in any speed category alone. At one point a runner whom I gave an award to at the Prairie Fire Wichita Marathon last weekend recognized me on the sidelines and gave me a wave.  Running is such a small world.

I was beginning to feel the warmth of the day take effect on me and I could tell others were too.  The pace group in front of me was thinning and I don't know if this was because of the harsh speed changes in between miles or the temperature of the day (or even the fact that many people bite off more than they can chew on race day, as I have seen numerous times.)

Right before the 20th mile, for good measure, I stopped to use the bathroom again. Why not, right? In fact, it was almost in the exact same spot I stopped around mile 8 earlier (as the course looped back around on itself for a certain portion.)

These final miles were ones I just was hoping would end. I heard cheering for the fourth place woman right behind me at about mile 20.5 and got excited.  I was hoping I could get her to catch up to me and maybe we could track down third place for her.  However, the fourth place woman dropped off the pace and the third place woman was so far ahead that we would have had to run ridiculous last mile splits to catch her.  But these are the things I do to get excited when I am running my 120th marathon of my life!

Soon, the pace group in front of me was down to one pacer and one runner.  The field was thinning and even though I wasn't exactly picking up the pace I was passing marathoners left and right.  On the way to a negative split for the day, I was now concentrating on other runners around me and trying to enjoy their story.  Near the end of the race, I passed a runner who I have seen on more than one occasion and who always inspires me.  Jeff Benelli is his name and he, as a legally blind runner, still continues to run fantastic times.  He would end up running a 3:11 and at the age of 44 would easily qualify for Boston (Of course, unless he signed up right away on Monday he would not be making it in.  I can see a column on Boston filling in absolutely ridiculous record time coming from my fingers soon, fyi.)

As I streamed toward the finish, knowing I would be getting another Boston Qualifying time myself (making it my 56th BQ) I laughed inside thinking that this would also be my 12th time in the 3:09:xx range.  In fact, with my 3:09:46, 10% of all the marathon I have ever run have been a 3:09.  I love stats. 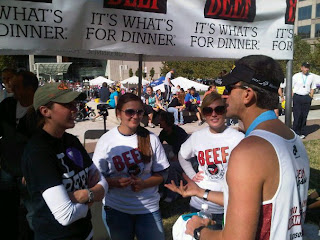 After the race I got to spend some more time with those in the Kansas Beef Council and talk not only about beef to those who were interested but running and racing to those in the beef world who wanted to use this fantastic source of protein to fuel their own running.

Before the day was over, I made a trip to Lawrence, KS, back to Kansas City and then flew to Denver where I was eating some filet mignon personally prepared by a friend on his grill.  The next day I got to cheer on some of my newest friends as they finished their first marathons ever in Denver. It was one heck of a weekend as I got to experience my own enjoyment in a race, watch others who I don't know but admire challenge themselves and  finally witness those who I am good friends with experience their own personal glory.

Heck, it is almost time to do it all over again already, Next stop: Running For The Bay Marathon in Apalachicola, Florida!
Posted by Dane at 12:24 AM

Thank you so much for being there for us in Denver!

Let's see, lots of hills, lots of potty breaks and an AWESOME finishing time???? Wow, you are amazing!