Note: This was originally posted last year after the Boston Marathon I ran. However, it seems to have been eaten by the internet so I am posting it again for those interested readers!

On my long flight back to Salt Lake City I struggled with how to sum up this past weekend. This either had to be a 4-line recap or a 40 pager. I could not see how to possibly do it justice either way. Luckily, for your busy eyesy I was able to settle on a compromise but realized I was going to leave many great details and a plethora of people out of this recap. That is what telling stories in person are for, I guess.

The weekend started with a redeye flight from SLC to NYC and then connecting to Boston. If you have the opportunity NOT to do this, I suggest you take it. Without a doubt this is not how you want to start off a restful weekend before a marathon. Arriving in Boston on Saturday morning, I had the pleasure to be able to be staying with my friends Judith and Emily in Cambridge. While there were many other factors that made this a "must" weekend, not needing to spend $300 a night on a hotel was, without a doubt, one of them. Judith, Emily and I then hopped, skipped, and jumped on the "T" (Boston's subway system) to the expo to get our gear, bibs etc. At the expo, I ran into more friends than I can count. Some I was meeting for the first time after numerous email conversations, and some (like Larry Herman and Rachel Ridgway of the Frederick Marathon) I do not see nearly as often as I would like.

Roaming the expo briefly I saw more running celebrities than I could name. But I knew I needed to get back to my host’s home. I had slept maybe an hour on the plane but other than that I had been up for 2 days. So after a late pasta and meatballs dinner, I settled down to go to bed early.

I spent the next day watching an extremely exciting Women’s Olympic trials and cheering friends in the race onward to the finish. After the race I attended a Dana-Farber Dinner with my friend Judith who herself was running for the Dana Farber Marathon Challenge. I got to meet Uta Pippig at the dinner which was a huge thrill.

But the evening had to come to a close. So, back home we went and it was time for bed. Morning comes early when you have to bus out to Hopkinton!

RACE DAY
There really are few words which can encapsulate the feeling of starting line of the Boston Marathon. Or more accurately, you need MANY words. I am going the fewer route for this portion.

My friend Chris George, a BAA member was going to try and meet me at the start and run together for most of the race. Luckily, I am 6'1'' and Chris is like 6'5'' or so. I knew we would find each other. Before the race even started we did.

*BAM* goes the gun and 30 seconds later, we cross the start line. We worked out a deal; Chris knows the area, having trained on these roads dozens of times so he would help lead us through all the nooks and crannies. Having run 75 marathons and being pretty good at even splits, I was going to set the pace. Chris isn't good at listening!

The first few miles ticked away and we were a little faster than we wanted to be. Well, Chris wanted to run 6:45s and I wanted to run 6:52s. We were hitting 6:47s. Before long my good friends Dan Simonds and Tom O'Neill from the Washington Running Club joined us. Dan and I had talked of running together and I was really glad to have found him. With all of our talks of splits and the like, we soon had a gaggle of people falling instep behind us. Chris was directing us where to go and I was telling people to speed up or slow down. Before long our unofficial 2:59:59 pace group had about 10 solid people running together.

Miles ticked by and before we knew it, the screaming girls of Wellesley signified we were close to the halfway point. I told some of the guys in our group to not get too carried away by the women as they were screaming for the race and not for us specifically. I then proceeded to get carried away and slap hands, flex, ask for phone numbers and be a general ham.

First half zoomed by in 1:29:30. Not too shabby. Unfortunately, the cold chilly morning at 9:30 AM had turned into a cloudless bright sun-shiny day by about 10:02 AM (the race started at 10 AM). We knew the second half was going to be harder. 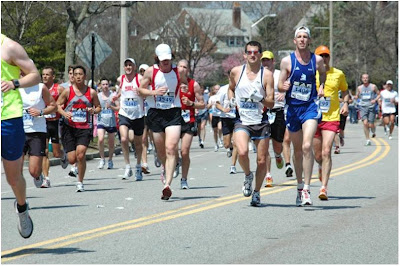 I did my best to hold our group together, but as we neared the hills I saw Dan fall out of my line of vision. A few others fell back as well. Trevor, a guy who was shadowing Chris and I from the start, complained of back spasms. I tried to give him some quick advice and he hung on for another mile. On the hill before the infamous Heartbreak Hill, Tom asked if this was Heartbreak. I said: "Nah, it's the next one." Tom fell out of my line of vision as well here.

Chris and I began working as a tandem.


We were holding steady to our goal of running sub-3 but I knew it was going to be close. Moreover, I knew that I had to turn around and do it all again a few hours later. As such I was running hard but running as smart as my ego would allow. 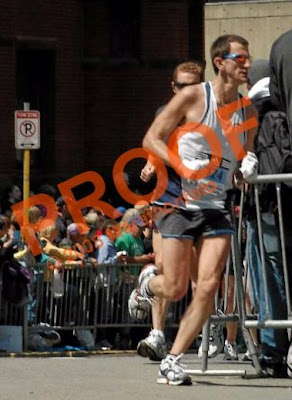 Right before Heartbreak, it was gut check time. I knew if I could get to the top of the hill on pace, I could use the downhills and flats in the last 5 miles to bring me in under 3 hours. Praying to run a 6:50 mile here, I was disappointed to run a 6:59. A 7:10 next mile made the decision easy to just cruise in from there.

Down Comm Ave, turning right onto Hereford St there was just one last turn and .35 of a mile to run on Bolyston Street.


Sucking in all that is the last 2 minutes of the Boston Marathon, I reveled in being able to do this. To run. To enjoy life in the way I want to. I can only hope others were doing the same. A few whippersnappers passed me in the last few feet and I wanted to yell "Yeah, well I am doing it again in like 120 minutes . SO there!" But I refrained.

Now it was time for me to run again.

I thought I had a little more time to recover and possibly grab a shower and a bite to eat, but before I knew it, I was in a van on my way back out to Hopkinton to run with Dave McGillivray. (This is, of course, after walking to the end of the buses to retrieve my gear, walking through thousands of people to Dave's hotel, sitting on the cold concrete outside for 45 minutes or so as I wasn't a hotel guest and therefore couldn't go into the lobby, freezing while still be baked by the sun, cramping and trying to deal with some slight chafing and doing my best to get my body ready for another 26.2 miles.) Changing into clean socks and ignoring a blister that had formed on my toe, I relubed with Body Glide in the places I could reach, downed a Diet Coke and ate a bagel. I had started the first marathon at 10:00 AM, finished at 1:01 PM and at 2:30 was back in transit. 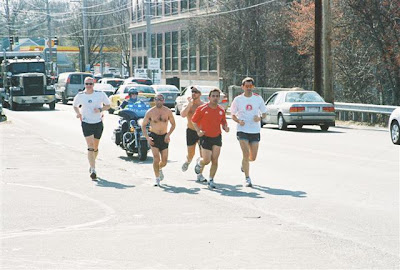 By 3:30 PM, I had met with Dave and a few good friends, toed the starting line of Boston as close as I would ever get in my life and we were off. A group of about 5 of us began this surreal trot through the small towns that make up most of the Boston Marathon course. We had a police escort to assist us through tough spots and a few of Dave's loyal friends and family there to stop every mile or so to give liquids and food.


After about 6 miles, I was really feeling it and began lobbying someone to get me a cheeseburger. Make it a double cheeseburger. The GUs and pretzels, etc. were just not going to sustain me. Like an angel, Ron Kramer, Dave's good friend and one of the organizers of TREK appeared with my magical remedy. Thank you McDonald's.

With bags of trash all collected and waiting to be taken away, we passed by the ghosts of aid
stations which had been packed just a few hours before. We got plenty of cheering from people all about as they are well-versed in Dave's post marathon marathon. Dave and I spoke sparingly. He was without a doubt exhausted after what had to have been virtually a sleepless weekend (putting on both the trials and the Boston Marathon) but he was going to keep his streak of 37 straight years of running the Boston Marathon alive.

As we got mostly knowing cheers and a few puzzled glances, one comment made us all laugh heartily. As a few very well-"hydrated" college guys played catch on their lawn, one of them saw us and made a comment about how we were WAY behind the leaders. His buddy, in what may have been a mock Boston accent (or very well was authentic as could be) said:

The miles went by and soon we were into Boston Proper. The CITGO sign loomed ahead. For those who may not know, when you pass the giant CITGO sign in Boston you have exactly one mile to go. Unfortunately you can see it from mile 23.5!

As we neared the finish I did not think things could be more incredible. But as the clock ticked away and began to reach 9.5 hours since the race had officially started, it was obvious we would NOT be the last finishers. Here, facing backwards in a wheelchair, and pushing himself with ONE LEG was a racer. Inflicted with cerebral palsy this unbelievable specimen of true grit (whose name I have not been able to procure as of yet) had been pushing himself for the whole marathon course with his one working limb. 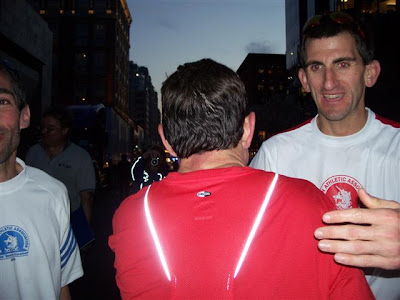 Exhausted, bleeding, sore and slightly delirious from the past weekend's events I smiled. What an inspiration this racer was. I immediately think to all the people I know who say they can't finish a 5K, let alone a marathon. I wonder if they would say that after seeing this racer. Just a few seconds after Dave broke the tape, he finished behind us. Dave shook his hand, gave a few of us some hugs, posed for a few pictures and that was that. The day was now over. Within minutes we were going our separate ways. An unbelievable weekend had come to close.

I then got up at 9 am to go back to SLC because 48 hours later I had to fly to Seoul Korea to run another marathon.  Did I neglect to mention I ran a marathon the Saturday the week before Boston and in between had lost my job as well in that time?

Well, let's say it was an eventful fortnight.
Posted by Dane at 4:35 PM