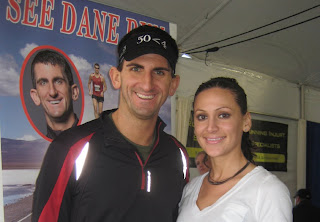 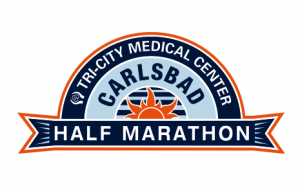 I have known from running the race twice previously that, for whatever reason, the first two mile markers are just off.  No idea why but they are.  As such, I told my runners (I do think of them as "mine" even though James was pacing as well, and I had only met them minutes previously) that they needn't worry about these first few miles and all they needed to do was trust me.

With the first 4 or 5 miles run in a calm darkness with the sun just barely cresting the horizon in front of us, illuminating the pacific shoreline to our right, I reminded everyone how lucky we were to be here.  And as the darkness sort of hid some of the mile markers, before they knew it we had come to the 10k, had split from the half marathoners and were right on pace.

The only significant hill to speak of on this course is right around mile 9.  I told my runners we would take it conservatively, instructed them on the proper way to tackle a hill and we began to cruise right up it.  We saw Sam Felsenfeld on number 5 of a hopeful 60 marathons this year and I let all my runners know what he is doing.  I then teased Sam and said that he had never beat me so if it came down to a sprint finish, I was ditching the pace group and taking off after him.  While we passed Sam on this uphill, I think it may have lit a fire in him.

I was hoping to see an internet running buddy handing out water but unable to scan the crowds while keeping my eyes on the road and shepherding my runners, missed him.  Alas.  With a screaming downhill to contend with and a bunch of runners who wished to make up the time we gained going uphill (which was surprisingly low) I was using all my energy keeping them all in check.

Having done so in a satisfactory way, I know I was not the only one who was happy to see the halfway point ahead.  The brisk morning coolness finally was wearing off and slight swirling winds were abating.  With a half-marathon time just about 25 seconds ahead of exact pacing, the second half began.

I had a brief and surprising flashback as we hit the mile 15 point of my race the previous year when a girl I was dating had been waiting for me to cheer me on.  For no good reason, I almost expected her to be there again.  These are the things which slip into your half-awake mind nearly 2 hours into a marathon.

An irresistible urge to go to the bathroom had me placing my pacing sign into James' hand as I went to relieve myself.  James had decided to run the full marathon simply because he had invested so much into this team that he wanted to see them do well.  He was a welcome addition indeed.

Hitting the turnaround on PCH, we began our trek towards the final 10k.  With the sun at our back and miles under our legs, my group was still strong and talkative.  I knew the real test lay ahead. 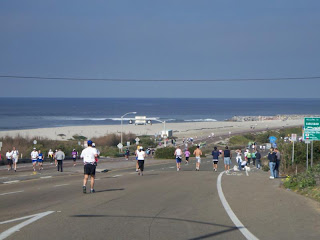 For the next few miles, we ran unhindered by much of anything.  The rolling hills we encountered we swatted away with ease, even joining the tremendous glut of half-marathoners was no problem as we had our own dedicated lane on the far right hand side.  Sure some pedestrians did not realize this was not a walking lane specifically for them but a few well-times, bass-filled "Runners on your LEFT" from me had them scurrying for cover.  This lane was a new thing and one I thought was a brilliant idea.  Until it ended a little before mile 23.  Then it became a madhouse. 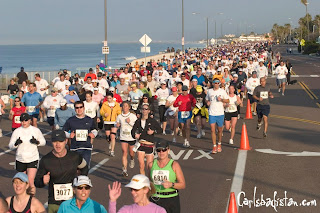 While the half-marathoners have paid their registration and deserve to be on the course as much as anyone else, they must simply be aware of their surroundings.  Full Marathoners running at a 7:15 pace were crashing into the ass ends of those running anywhere up to 9 or 10 minute pace and it was not pretty.  And as many had their infernal listening devices on they could not even tell a group of 10 runners or so, just a 5k away from realizing their dreams, were barreling down on them.  This MUST be addressed.  I don't know if a dedicated lane the whole way in is the answer or what exactly but neither group of runners needs this hassle.

As we joined the masses, the loss of accountability made many of my runners who had been hanging on, fall back into the anonymity of the pack.  I was soon down to a handful that were right on my hip and following every move I made through the crowd.  James had fallen off the pace somewhat and I have a feeling he was trying to bring in as many stragglers as possible.

Soon, there were just a few miles left and a catchy phrase popped into my head.  "Boston might be 3,000 miles away for everyone else, but it is just 3 miles for us!"  This emboldened many and away we went.


With a mile to go, I knew my core group of runners was going to get their times. Only a massive collapse would keep them from doing so.  Winding through the crowds, with the sun finally warming our backs, I allowed my runners to do a dead sprint ahead and leave me, as usual, starkly alone for my on time arrival.


3:09:52 seconds after the start, or EXACTLY what I ran last year, I crossed the finishline.  My 53rd Boston qualifying race was under my belt, lots of hugs were shared and many first time Boston Qualifiers like Michael V and Brian P. (who needs to get his official time fixed) were ecstatic. I beamed with pride as if these runners were my old friends.  In a way, they were.

Run a marathon side-by-side and step-by-step with someone and you learn a great deal about their character.  I learned that the group of 10-12 who would all eventually break either a 3:10 BQ time or set a new PR under my care, were a great group of people.  I can only hope they have wonderful races the rest of 2010.

They earned their medals on this day.

Sounds like a great day, Dane. Congratulations on a great pacing job!

I ran that race a few years ago and had to yell on your left a lot to runners. Not something im fond of doing! At one point I yelled "on your left" and a lady moved to her left and I tripped over her and fell to the asphault. Not a fun experience. They need to do something different there with all the people they have.

It was weird when I caught up to some straggling marathoners while I was running my half. But no incident of blocking each other..

It was not until I got to the end of your post that the time you were pacing for was the BQ qualifying time. That seems like such a big pressure on yourself, but you seemed to have perfected that pace. Even looking at the up and down pace you ran, you ended up hitting it perfectly. You must really know the course well!

great job on the marathon!. it was tough for me as my first real marathon. finished in 4:44:03

Thanks for the recap. I ran Carlsbad last year. Beautiful course, but I probably wouldn't run it again because the crush of half-marathoners is such a pain. The dedicated lane must have helped, but it's too bad it ended around 23. I did really appreciate the nice big finishers area they had for the marathoners, though. It's nice to have plenty of room to recover in.