I have never seen so many redheads in my life.

We often use hyperbole when we describe things but I am so glad my friend Alli with me to back this up.  Over and over again at the Go! St. Louis Marathon expo I saw redhead after redhead.  They say you easily see things you are trying to notice but unless Ireland was actually located outside of the Billikens Arena in St. Louis it was impossible to miss all the fiery goodness this weekend at the expo.


In the days before the race, I knew I was going to do my best to run rather slow and use this as my last training run before my 202 miler.  As such, I got to do all the things I usually do not get to do because I am too concerned with saving my energy for the race.  Being in St. Louis, my timing was right to not only see my first hockey game ever but to also witness Keith Tkachuk's final game as a player in St. Louis. 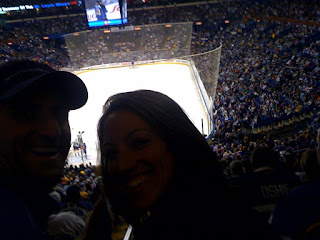 The next day prior to the expo, on an absolutely gorgeous day, I was able to head to the top of the Gateway Arch with Alli and check out the view from there.  Pretty fantastic. 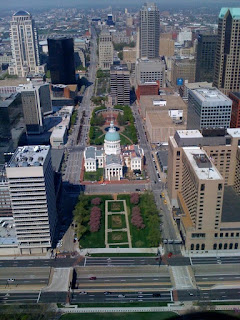 But there was a 26.2 miler to be run, regardless of how easy I wanted to do it.  So after almost laughing myself silly at the 16,000 redheads I saw (and countless other wonderful people including many friends I was meeting in person for the first time), it was time to head to bed.

All I wanted to do for this race was run somewhere in the 3:15-3:20 range.  But as morning broke far too early (and far too warm for my liking) I was pretty spent.  Also had a little bit of a stomach problem that wasn't going away.  I knew these are the worst combination: when you want to run slow and easy but you also want to be done as soon as possible.

I took the first few miles pretty lax (I thought) as scores of people passed me like I was standing still.  When my first mile was still under 7 minutes I felt good. I could still pack off and feel pretty reserved.  Around mile 3 I could hear the 3:10 group coming up behind me.Wow, what a pack of people!  I decided as long as it did not take too much out of me, I would hang here and just listen what this particular pacer had to say and what encouragement he gave.  It was nice to be in a 3:10 pack and not be the one responsible for it for a change!

However, the group was huge and was moving as one solid mass.  When they would hit the aid stations it was hard to get a drink. I knew given the already warming weather, liquid was going to be necessary for me today.  So I pulled a little ahead of the group and began running by myself.

I will admit, I was a little surprised at both the length and the grade of some of the early mile hills.  Straight shots down the center of town, you could see these hills rise and fall in front of you.  WIDE lanes were completely shut down for runners.  I was massively impressed as there were "only" about 2,000 marathon finisher and 10,000 half -marathon finishers.  To shut down a major cities streets like this takes a lot of effort.  Granted, I noted earlier in the weekend that the downtown itself seemed a little on the dead side on the evenings so maybe it was not as hard to do so here on a Sunday morning.  Nonetheless, it felt like we owned the city.

I missed a few mile markers as I was daydreaming and running over lots of logistics for the race next week in my head.  I had felt a little queasy at mile 6 and was surprised to feel better at mile 10.  Maybe today wouldn't be as bad after all.  I then hopped into the bathroom real quick and when I came out the 3:10 group had passed me.  Here at 10 miles the group was still large but had already dwindled in size.  I decided to once again follow them along.

The half marathoners split off and began to head back home.  I was thinking how nice that would be today on a day where I wasn't in the mode to do 26.2 but a sign that said "At least it isn't 26.3!" made me laugh and keep going.

As we entered the Central West End, we runners hit Forest Park.  Filled with little undulating hills and pretty much bereft of any spectators it was nonetheless a beautiful place to run.  Many non-racing runners were out enjoying the day in the spacious greens (seriously - it is 500 acres larger than NYC's Central Park) and abundant trails. 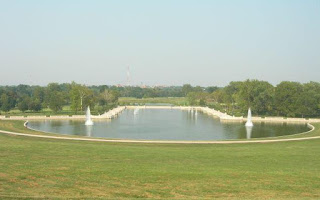 I fully intended to get to the halfway point and then dial back my efforts. When mile 14 was exactly the same as 13 timewise I was pleased.  Even the next few miles, where I again felt a little queasiness in my stomach which made me drink only water on the course instead of Gatorade, were good miles.  While there had been a few barren spots in the beginning of the second half, the crowds were pretty abundant in other places.  With the four person relay being a heavily attended event, every 6 miles or so had a mass of people cheering on the runners. I jokingly asked a few people if it was too late to join a team.

A few good miles had me right in the back pocket of the 3:10 group, now down to a smattering of runners (pretty typical actually.  I had hoped more would have hung on.)  By now, the sun was very warm overhead.  There were a few spots where runners were completely exposed but often the shade of trees blocked direct sunlight.  As I hit mile 21, I thought there was zero reason to be running a 3:10.  Another bathroom break revealed to me I was severely hydrated and when I noticed one could do tequila shots off of the salt on my arms, I decided to walk through every aid station from here on out, drinking my fill.  And that is essentially what I did.

I thank the volunteers who did a wonderful job and the large amounts of police officers who kept the intersections free of traffic. This really was a well-organized race.  A few spots in the final 10k could have definitely used another aid station or two, as I can only imagine what it was like as the day got warmer and the masses started coming in.  As there last few miles contained a few brutal climbs in wide open spaces (meaning direct sunlight) this is definitely where more liquid could have been very useful to runners.

However, as the Gateway Arch appeared in the foreground, I knew we were close to home. 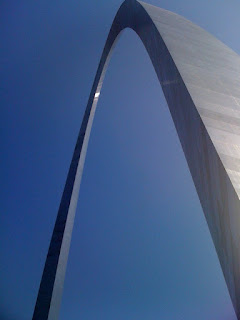 With a little over a mile to go I was joined by a runner named Nate who looked both quite young and quite tired.  I was right on both accounts.  Only 22, he was cruising along but his speed would ebb and flow, as I passed him one final time with a little over half a mile to go, I told him to run with me.  I knew that he had probably not been in front of me when the race started so I said no matter what we finished in terms of gun time, his chip time would be faster than me.  Well, as we ran stride for stride in the final few feet I was right.  Both ending up in a clock time of 3:14:11, young Nate was able to garner a 3:13:59.

With my 3:14:06, I was happy to have marathon #115 in the bag. A trip to Boston to do a book signing at the expo next weekend is all the stands in the way between me in the 202 miler.  Let the knee-knocking begin!

Kudos to the Go!St. Louis people for putting on a stellar race and to the city of St. Louis for being so kind and welcoming to all of us runners.  This race is one you should put on your calendar.
Posted by Dane at 10:46 PM

hey dane.. I finished my half in 2:28:29.. not as well as i had planned.. i promised i would let you know how i did and there ya go! it was so nice meeting you at the expo friday!
(i had the blue and yellow tye dye shirt on with the greek letters with the word runner going through it on the front with a 13.1 on back at the expo.. one of the few non-redheads)

Way to go Dane! Thanks for the many nice STL comments. :) Isn't Forest Park gorgeous?? I am particularly fond of it as it is my home base training park a mile from my house. I hope I will be injury free and running the GO! again next year. Congrats on 115 and good luck in the "one man relay".

Congrats Dane, hope you're feeling better as you prepare for American Odyssey. I ran StL in'04 and liked it as well. At that time we did the brewery loop as the last 6 instead of the first 6. Was kinda tough having to pass the finish and head out for another 6 miles. I agree with you that some of the hills were sneaky long. Have a good time in Boston. -gostever