I was searching around lookng for some local races and came upon this series of 6 aquathlons (swim/runs) put on by a nearby gym in Austin.  Occurring on one Tuesday every month for the next 6 months, they looked like something I would be interested in at a very low cost. So, evn though one was coming up in a week, I decided I would throw my hat in the ring (or my goggles in the pool, if ou will.)

With the National Aquathlon Championships coming up October 1st here in Austin, I wanted to actually give these swim run races a go once again.  Back in 2009 I had a hellacious travel experience getting the the championships game in Asheville, NC (a state I am still boycotting stopping my 50 state marathon goal short one at 49) and was able to qualify for the World Championship race.  Life intervened and I never got a chance to compete at Worlds.  I hope to not only qualify again but go race in the champs this time when they occur in 2018. One surefire way to get better at an event is by doing many more of them.

November was the last time I swam a lap and it might have even been earlier than that when I last wet my gills. I had given some thought to a swim workout or two before the race but figured it wouldn't improve my standing much right before the race and first swim in 6 months might just make me sore. So, I figured I would go in cold, lower my expectations, still be disappointed, and then hopefully force myself back into the pool. The tired excuse of "well, I just haven't been working out" is, well, tired.  But this time it was at least true. 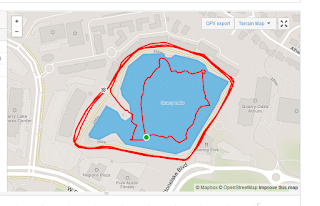 The format for the event was simple: one 750meter (ish) swim in an unbelievable cool quarry that Pure Fitness Austin apparently owns as part of their gym (I am extremely intrigued how much that cost or how they came to own it) then three loops of a 1 km(ish) loop around the quarry.  I say (ish) because, well, the race says so itself and without a doubt the 3 km (1.86 miles) is definitely 2 miles. Sounds nitpicky but .14 of a mile at 6:30 pace is another 55 seconds of running.

I arrived with plenty of time to get checked in, in spite of horrific Austin traffic from my home to the race site. I am still a relative newbie to multi-sport racing and each venue adds its own level of figuringoutness. A small amount of foresight did allow me to remember to bring a collapsible chair and a towel along with my gear. As I walked down to the quarry I could see that once you left the immediate area of the water, the hill leading up to start the run was extremely craggily.  Since I have the tender soft feet of a newborn I was extremely happy I had thought this might be the case and planned accordingly.

You see, even though the race was just 2 miles of running, I wasn't going to go without socks.  Some people can do that and I find it amazing but that is just not my cup of tea.  However, I did not want to have to waste time putting the socks on once I left the water as that can be quite difficult. So, I opted for a pair of semi-compression Feetures socks that I would wear during the swim, and then when I transitioned they would protect my little tootsies as I made the jaunt over to my gear.  Similar routines have worked for me in the few other triathlons I have done so I assumed it would work fine here as well.

As I waded into the water for the floating start, the water was a perfect temperature. Some Austinites were wearing wetsuits but I was just sporting a pair of Speedo shorts. In such a short, fast race, worrying about a wetsuit (which I currently do not own) was hardly something I was going to waste my time on. 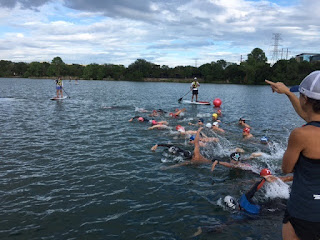 They started the countdown and at the airhorn (for some, maybe a half second faster than others) we were underway.

I immediately was caught in a little bit of a washing machine as people churned for position.  In addition, I could tell that wow, I was NOT in swimming shape.  As I jockeyed for a place to get my swim on, I had no idea where I was place-wise. Soon, however, I found some open water and began to do my best to get into a groove.

The water was fairly clear to see other competitors and for the first half I was decently sighting.  I was definitely winded but as we near the halfway portion, my lungs opened and I passed a swimmer or two. We then turned westward and the setting sun blinded me, making it difficult to see the buoys.  I was basically hoping the guy in front of me was going in the right direction and I think he was hoping the same of the guy in front of him.

There were a few buoys we had to keep on our right to guide us and when we got to a small dock it signified a hard right angle turn.  I almost swam headlong into the last dock before just barely missing it since the sun had hid it from my view. In front of me I saw a line of buoys I didn't recall when I first looked at the course but figured I had to follow them. I hugged them close for the next 50 yards or so.  Then, out of the corner of my eye, I caught a glimpse of the finishline. I apparently was starting to make another loop instead of just swimming toward the finish. Quickly I changed directions and began making a beeline for the finish. A little perturbed to add more distance than necessary, I just used that anger to fuel me to a quick end of the swim. I closed closely on the next guy in front of me but he still beat me out of the water.

Popping out of the quarry, I was a bit wobbly. I had definitely exerted myself.  My chair was off to the right and I quickly plopped into it to make a change. The socks did wonders for the ten or so steps I had to make over the rocks.  I threw on my shoes and a visor and began the climb out of the quarry as I slid my singlet over my head.  I definitely need to get one of those fancy-dancy swimsuits with my name on the ass. Maybe if I get remotely fast enough to wear one, someone will buy me one.  Although I don't have nearly the ass for "Rauschenberg."  I guess "Dane" it is.

Leaving the hill, the path around the quarry revealed itself to be a soft, crushed gravel surface.  Pleasant to run on but not to run fast.  Up ahead there was a guy who I thought had been the one out of the water right in front of me but this guy was running with a little dog on a leash.  It took me half a loop to catch him but sure enough: dog on leash; chip on ankle; numbers on arm.  Did the dog go swimming with him, too?!

The loop was .67 of a mile around, with more than a fair share of small twists and turns, roving
pedestrian traffic, a sizeable hill to climb each time, and was not a loop I would ever say was "easy." Nevertheless, I knew what was in store for the next two loops. Crossing through the timing mat in 4:25, I was hoping to pass even more runners ahead. I had zero idea what place I was in.

The second loop had me tracking down one runner who must have just killed me in the swim. But his running was suffering for sure.  In addition, as the ladies started 5 minutes after we did, beginning the second loop gave me an opportunity to have the first few fast females as rabbits to chase as well.  Unfortunately, while I was passing runners, none had been in front of me except for the one. I went through the timing mat in an nearly identical 4:23 loop. That was interesting. 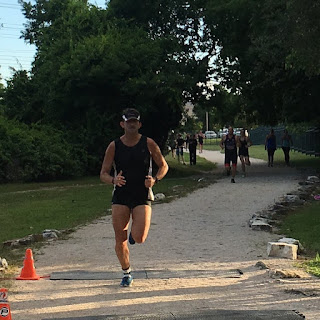 I heard some footsteps behind me right as I was beginning the last loop but they quickly tailed off. I figured perhaps I had a pursuer and when I picked up the pace they figured it wasn't worth it.  Looking back I see now it was the overall winner. Thank god he didn't lap me. That would have been a kick to the manparts.

Throughout this loop I saw there would be no one else to pass so whatever position I was in would be my end position. But was it 5th? 25th? I had literally no idea.

I finished the final loop in 4:20 and could not have been more happy to be finished. Twenty-six minutes and two seconds has rarely hurt this much. The only question would be my final place. I grasped at my shorts as I doubled over trying to catch my breath. Sprints hurt!


When we gathered for the final results, I wasn't expecting much.  But when they said I won the Masters overall award, I was pleasantly surprised.  I was also happy to hear that the overall female winner, a 13 year old girl, did not beat me. You laugh but read that again: she was the overall winner. Who was 3rd place for the women?  A 15 year old. Egads, these ladies is fast! I finished 9th place overall (which surprised me as well) and two young boys also kicked my ass.  Good job to all of them! 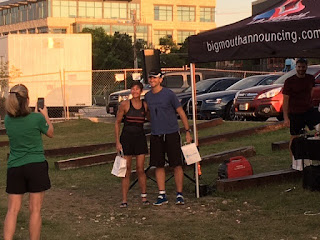 This was a very good barometer for which to measure where I am right now.  I have no intention of coming in as unprepared for the other races. I fully expect significant drops in times, as well.  Placement, as always, depends on who shows up so another Masters award is up for grabs. But for now, a couple of 6:30 miles after a hard swim on uneven surface is not too shabby.