I have now run the Indianapolis Monumental marathon or half for three consecutive years. For some reason I come into the race forgetting how well run it is and how easy it is to have a good race here. I am making a promise to myself to never make that mistake again.

First and foremost, hats off to the organizers for putting together a truly fantastic weekend.  I ran the 13.1 distance and had an absolutely splendid race in picture-perfect weather. Well, picture-perfect for a runner who likes to run in cloudy cool weather.  Those running the full or taking a bit longer had to deal with some inclement weather, including variable degrees of rain or sleet for small portions.  However, anyone finishing their race in under two hours could not have asked for much better.  On a weekend where the NYC Marathon was canceled, the Indy organizers opened their arms and streets to those who wanted to run a marathon in a fine city. Hundreds of personal bests were set and great times were had by all.

I arrived a little late to the first shorter day of the expo and had just enough time to get everything set up at my table before the smaller crowd which comes on Thursday rolled in. The next day promised to be a long one (with the expo going until 9 PM) and with my 2100 mile road trip the previous week moving one of my best friends, I knew I was going to be a tired puppy.

Most of the talk during the second day surrounded NYC's decision to cancel the marathon.  It made for a lively discussion and further clarified for me how, as a whole, thoughtful and intelligent runners are with regard to topics ranging all over the board. By the time the day was done, I got a late dinner and was back to my lodging I was, as predicted, exhausted. 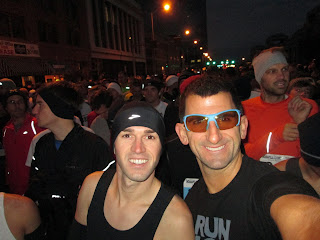 I was able to find parking downtown just a few short blocks from the race without too much trouble.  This was the first time I had driven to the start of the race (previously having stayed at one the many hotels near the start/finish area) and was curious how bad this would be.  Color me pleasantly surprised. The morning called for few cool temperatures but somehow it just seemed a little more than chilly.  Feeling the briskness in the air, I was disappointed I was not in better shape. This was definitely PR weather.

My lateness in arriving to the starting line (by design- I simply do not like to mill around prior to a race) made me miss the National Anthem.  I did, however, find my friend Mike who I met three years prior at this race. Mike got his first Boston Qualifying time ever that morning - in his first marathon ever! He was going to be running around the pace I wanted to run for the half for his marathon, so we decided to run together for a bit until the courses split.

My desire was to run right around 6:40 for the first five or so miles and then play the rest of the race by ear. I was very much unsure of what I had in my legs and four hours of sleep had me quite weary. Hitting the first mile right about where I wanted to, we were treated to a glorious sunrise just peaking out over the horizon.  I took a quick picture which doesn't even capture how beautiful it was.  Mike told me to enjoy it as bad weather was predicted.  I had missed this memo completely and could not have been happier to be running 13.1 instead of 26.2. 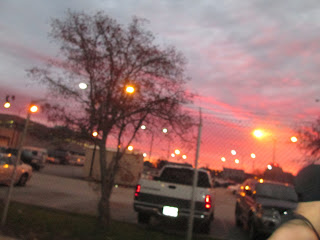 Soon thereafter, Mike, who was pacing a friend in his first marathon picked up the pace a bit.  I told him I was none too surprised when the next mile ran a little hot. Approaching the 3rd mile, I told them this was a pace I could not keep up and even falling back ran way faster than I was hoping to do. The pace they were keeping was one for a very fast marathon time but I knew I didn't have that in me today.  I bid them adieu and fell back into my groove.

These next four miles fell right into my desired wheelhouse for the day.  I was also quite surprised how easy this pace felt.  As recently as a few weeks ago, this would have been pushing it for me.  Perhaps I was finally getting back into shape! Around this portion of the course, the same (or at least I think so) band of young kids who rocked out last year was at it again.  I need to figure out who these kids are and become their agent.  They were just fantastic.  I’m racking my brain to remember which cover they were doing, but it was so spot on I thought it was the radio playing. 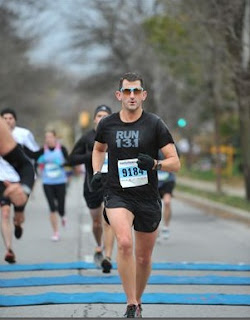 Around here, just as I was feeling good, a guy in a costume went running by. Dressed as a lemon to promote the company lululemon, he disheartened my mood a bit by striding by so easily.  However, so many people called him a banana that I felt a little better about myself.  Bad marketing if no one knows what you are! (to his credit, he had enough wind in his sails to consistently yell back "I'm a lemon!" I might get a shirt that says that apropos of nothing.)

Right after mile 7, the courses split and a stream of marathoners went off on their merry way.  I was marveling at the number of runners heading in that direction clipping off a steady and fast pace.  I always wonder if they are biting off more than they can chew or if they are well-versed in pacing.  I try to remember as many bib numbers as I can to go and later look all their times up and see how they did.  I simply have a thing for numbers and for info on runners.  It is either a gift or a curse, I haven't yet decided. 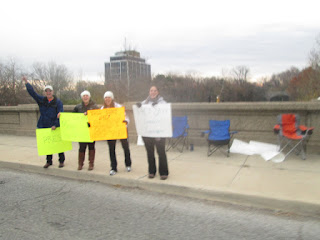 By design, I used the next three miles as a period to slow myself a bit and steady my legs for the final three miles. The briskness of the day kept many of the residents of the neighborhoods we ran through from being out and about.  Come to think of it, I don't recall many of the residents ever being out for this race.  I cannot say this enough - if a marathon ran past my door, I would be out there with music, streamers and my own little aid station.  It is a bummer so many people miss the opportunity to see the human spirit put on display in their front yard.  Kudos to the hearty souls who were indeed out there (I do not mean to make it sound like it was desolate) but one always wishes there could be more. 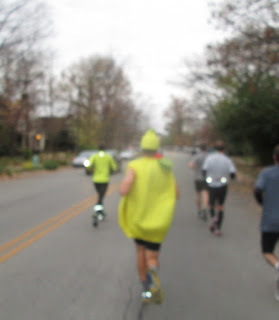 I was feeling good and to make my feel even better, I was gaining on that dastardly lemon. I fished my camera out of my glove to snap a picture of him as I drew close.  For some reason, my brain has not quite caught onto the fact that is November and I will need to bring sightly warmer clothing with me to races. As such, I borrowed a pair of those cheap stretchy cotton gloves from my friend Amy and stored my camera in them.  Some of the pictures were foggy simply because there was moisture on the lens.  Unfortunately, one of those pictures was what I think was a great shot of the banan-er-lemon's face as I ran by and let the flash fly.

I simply love the final few miles of this race. While the marathoner's get to experience the beauty of the homes on Meridian Street further north, we halfers get the straight and flat portion here to bring us on home.  Over two miles of put your head down and run, no need to worry about turns, running.  I love it. 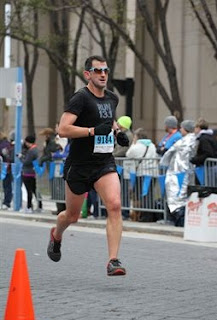 I could tell I was going to be in the 1:27 range for a finishing time. The only question was whether I would be in the lows or highs.  I was simply monitoring my system while a few runners and I played a game of back and forth.  They would surge and fall back and I would simply maintain.  Cardinal rule of racing is if you are going to pass someone - make it definitive. Otherwise, you give them hope and desire. While I did not speed up until the very last mile, just maintaining my pace kept them in my sights.  Finally with about half of a mile to go, I ramped up the speed.  I thought perhaps I could get under 1:27 but soon saw that would not happen.  Now I was just enjoying the people who said they liked my Julbo sunglasses and wished I could have handed out cards so they would know where to get them!

Finishing strong in a time of 1:27:19 was good enough for 127th place overall. To really tell you how fast people were running today, I finished in 1:27:54 last year and was 85th! When you get weather like this on a course which lends itself to being run very fast on, you definitely lament not being in shape to take advantage of it.

While the weather would turn a little wet later on, we were all fortune enough to be able to run. Those in NYC did not have that option. I did not hang around very long as I was now a bit cold.  I quickly returned back to my lodging and along the way cheered on all the runners of the race heading down Meridian Street.  I saw the marathon winners absolutely flying by (winning time was 2:18) and marveled at their speed. I would grab a shower to warm my bones, nap for the first time since I think I was 7 years old, and then get ready for the afternoon. 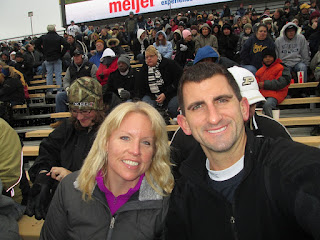 A friend had told me that Penn State was playing Purdue just an hour north and having never seen a Penn State away game (I couldn't believe it when I thought about it) knew I could not pass up this good fortune. We arrived a little late but then watched PSU reel off 34 unanswered points in a shellacking of the Boilermakers. We left with just a few minutes to go and headed back down to Indy.  My 7:00 a.m. flight meant at very early wake up call, and a well-deserved sleep awaited me.

I have every intention to be back here again next year and maybe I will be blessed with good weather again.

As long as the course stays the same it could be the day for a new personal best.
Posted by Dane at 11:53 AM